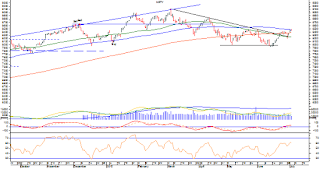 MARKET TREND FOR FRIDAY, JULY 03, 2015
The Markets have continued to resist to its 100-DMA levels and it is likely to continue to do so today as well. We can expect a quiet opening in the Markets and the Markets are likely to exhibit a ranged trade today and some amount of caution will clearly prevail over the weekend ahead of out come of the Greek Referendum. However, this will be a range bound caution with no major downside expected until something totally unexpected comes out from the global arena.
The levels of 8471 and 8525 will act as immediate resistance for the Markets. The supports will come in at 8420 and 8376 levels.
The RSI—Relative Strength Index on the Daily Chart is 61.14048 and it remains neutral as it shows no bullish or bearish divergence or any failure swings. The Daily MACD continues to remain bullish as it trades above its signal line.
On the derivative front, NIFTY July futures have shed 50,300 shares or a nominal 0.30% in Open Interest. This does not signify any major reduction of positions on either side.
Coming back to pattern analysis, the Markets have consolidated after moving past the 200-DMA. It has done so after forming a higher bottom post taking support near 7950-8000 zones. It would not be a surprise that the Markets may consolidate a bit more but in any case the levels of 200-DMA should continue to exist as a import support for the Markets if it has to confirm the bottoms that it has made in recent past.
Overall, the Markets are likely to exhibit a range bound trade and some amount of caution is certainly to weigh in on account of a weekend. However, if we see the underlying data, the Markets are looking for a slight trigger and they may see resuming their up move in the next week. The eyes are on the developments in Greece and in absence of any negative news flow, the technical indicators clearly suggest that we may see some more up sides in the Markets. As of today, cautious outlook with very modest stock specific action is advised.
Milan Vaishnav,
Consulting Technical Analyst,
Af. Member: Market Technicians Association (MTA), USA
Af. Member: Association of Technical Market Analysts, INDIA 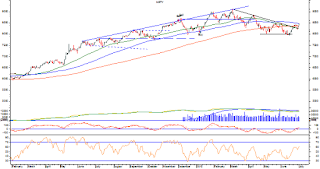 MARKET TREND FOR THURSDAY, JULY 02, 2015
The Markets continues to pose itself at an interesting juncture. The Markets are likely to open on a flat and quiet note and would look for cues again and it would do so with a upward bias. The Markets moved past the 200-DMA yesterday at Close and have halted at its 100-DMA which is 8474.05. This level will act as resistance at Close levels. However, the Markets have nearly confirmed the bottom that it had formed at 7950-8000 mark if it moves past this resistance as well.
For today, the levels of 8474 and 8565 are immediate resistance for the Markets. Support would come in at 8374 and 8340 levels.
The RSI—Relative Strength Index on the Daily Chart is61.7653 and it has reached its highest value in last 14-days which is bullish. It does not show any bullish or bearish divergence. The Daily MACD remains bullish as it continues to trade above its signal line.
On the derivative front, NIFTY July has continued to add further over 6.96 lakh shares or 4.26% in Open Interest. This is a very positive indication as it signifies that the Markets have continued to see yesterday’s surge on account of fresh buying.
Coming to pattern analysis again, the Markets have managed to move past the levels of 200-DMA at Close levels and this level is likely to act as support in event of any temporary consolidation. If we take a look over previous sessions, the Markets have formed a bottom near its double bottom support in the range of 7950-8000 levels. It pulled back, declined a bit, formed a higher bottom at 8195 and has moved up again. This structure has more or less confirmed the potential bottom that the Markets formed last month. The key would be to see that the Markets maintains itself above 200-DMA in event of any temporary consolidation.
All and all, all indicators look perfectly in place along with global news flows. It is likely that the Markets consolidate a bit after the serious pullbacks that it saw in last three sessions. However, all underlying indicators point towards continuing uptrend in the Markets. One may continue to make fresh selective purchases while protecting profits at higher levels. Consolidation, if any, would be in form of ranged sideways movement with some volatility but any major downside looks limited at this juncture.
Milan Vaishnav,
Consulting Technical Analyst,
Af. Member: Market Technicians Association (MTA), USA
Af. Member: Association of Technical Market Analysts, INDIA 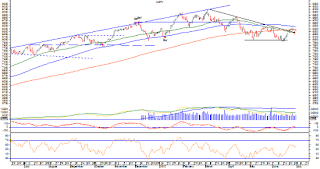 MARKET TREND FOR WEDNESDAY, JULY 01, 2015
Markets are poised at a critical as well as interesting juncture. Greek ghost has not completely gone away and at the same time, we can expect the Markets to open again on a quiet to modestly negative note and look for cues. On one hand all derivative data point towards strong possibility of the Markets continuing with its up move and on other hand, as of today, the Markets have resisted to its 200-DMA at Close level. Whatever the levels of opening, it would be critically important for the Markets to move past the 200-DMA levels in order to avoid any weakness and further capitalize on the pullback.

The RSI—Relative Strength Index on the Daily Chart is 57.3213 and it continues to remain neutral as it shows no bullish or bearish divergence or any failure swing. The Daily MACD  also continue to remain bullish as it trades above it signal line.

On the derivative front, the NIFTY July futures have continued to add over 11.28 lakh shares or 7.43% in Open Interest. All major stocks too have added significant amount of Open Interest. This is a clear indicator of the fact that that fresh buying has been seen yesterday in the last hour up move and this up move has not been on mere short covering. The NIFTY PCR stands at 1.07 as against 1.06.

Coming to pattern analysis, the Markets are now attempting to confirm a bottom it formed near 7950-8000 levels. It took a support at these levels, pulled back, formed a higher bottom ( at least as of now 8195) and are now attempting to move past the 200-DMA. If the Markets manages to move past this 200-DMA levels which stands at 8368 today, and move beyond that with conviction and participation, the Markets will confirm the bottom it formed in the recent past and this would be good at least in the immediate short term for the Markets.

Overall, the odds remain more in our favour and though some amount of volatility may still continue to remain in the Markets, the Markets have more or less digested the Greed drama and in event of any weakness, it is expected to continue to range between current levels and 8200 levels. Any positive trigger will take it to confirm the bottom and move past the 200-DMA. Very selective purchases may be made but still, as of today, more liquidity too should be maintained. 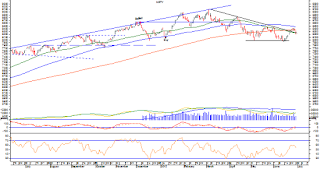 Today’s session too will witness the shadow of Greece news flows. The Markets may again open modestly down and importantly, it is likely to remain equally volatile. However, again, keeping the analysis on the yesterday’s lines, the Markets may find bottom near the falling trend line / 50-DMA levels that it has managed to hold on yesterday. With massive amount of shorts existing / created yesterday, the Markets may remain volatile but will have a very less relative downside as compared to its Asian / Global peers.
The levels of 8370 and 8415 are immediate resistance for the Markets. Supports come in a 8256 and 8210 levels.
The RSI—Relative Strength Index on the Daily Chart is 54.4055 and it remains neutral as it shows no bullish or bearish divergence or any failure swings. The Daily MACD remains bullish as it trades above its signal line.
On the derivative front, NIFTY July futures have added over 13.76 lakh shares or massive 9.96% in Open Interest. This very clearly signifies that the Markets have created much of the shorts and the bounce back that we saw yesterday was on value buying as well and not just merely on short covering. NIFTY PCR stands at 1.06 as against 1.01.
Coming to pattern analysis, though the Markets created a gap yesterday on the daily charts, it still continues to trade above its 50-DMA above the falling trend line resistance which it managed to move past. As also mentioned in one of our previous editions of Daily Market Trend Guide, even with or without and news flows, if the Markets consolidate broadly between its 50-DMA and 200-DMA, it would be normal as per the Daily Chart. However, given the currently volatility given the global news flows, we may observe some intraday breaches on the Charts but at Close, the Markets are all likely to remain within its support and its filter.
Overall, it is important to note that all our macro factors such as interest rates, WPI and CPI Data, IIP data, etc., are very much in place. We are certainly to outperform the global peers while reacting to these Greece happenings. However, in the process volatility is something that we will see remaining ingrained in our Markets. It is continued to be advised to stay away from aggressive positions and maintain liquidity while continuing to maintain cautious optimism in the Markets.