MARKET OUTLOOK FOR FRIDAY, DEC 01, 2017
In our previous note, we had mentioned above confirmation of the levels of 10410 becoming a temporary lower top for the Markets. Thursday’s expiry session saw the volatility on expected lines but the session remained weaker than expected. The benchmark NIFTY50 ended the day losing 134.75 points or 1.30% after failing to sustain a feeble attempt to recovery. While we step in to the December Series, Thursday’s session was technically significant. We may see a flat to mildly positive start on Friday but that thing aside, the levels of 10410 has been confirmed as a lower top for the Markets after 10490. 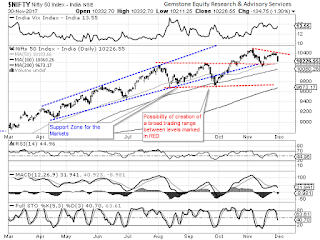 The Relative Strength Index on the Daily Chart is 44.9564 and remains neutral while showing no divergence to the price. The Daily MACD has reported a negative crossover and it is now bearish while trading once again below its signal line. A Big Black Candle that emerged today reaffirmed the credibility of the resistance levels and further it is also accompanied with a “Falling Window” formation. This results after a weak / black candle which emerges with a gap on the downside and this also usually results into continuation of a weak trend.

Overall, there are chances that the Friday’s session may see some attempts of a technical pullback but it would be extremely critical to see if the Markets sustain such attempted pullback, if any. The immediate supports exist in the 10180-10200 zones which is a important pattern supports that also coincides with the 50-DMA for the Markets. The current structure of the Charts has most likely pushed our Markets into prolonged time frame of consolidation. We recommend remaining light on overall exposures and maintain a cautious view on the Markets.

MARKET OUTLOOK FOR THURSDAY, NOV 30, 2017
Very much on the expected lines, the Indian Markets spent the Wednesday’s session in a much defined range while the benchmark NIFTY50 ended the day with a net loss of 8.95 points or 0.09%. We enter the expiry day on Thursday and we will see the session continuing to remain heavily dominated with roller centric activities. Important thing to note that the Index has struggled for several days in the 10365-10410 zones and have not sustained those levels. In all probability, until the level of 10410 is breached on the upside, this level of 10410 will now act as an intermediate top and a important resistance. 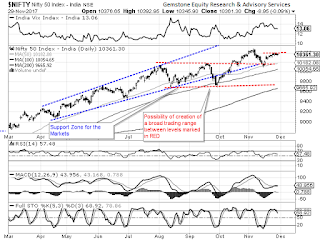 The Relative Strength Index – RSI on the Daily Chart is 57.4833 and it stays neutral showing no divergence against the price. The Daily MACD is bullish as it trades above its signal line but may report a negative crossover again in event of some weakness. Spinning Tops continued to recur on Candles which emphasizes indecisiveness on part of participants.

The Pattern Analysis does not paint a pretty picture. With the Index resisting to the levels of 10410 and failing to clear it comprehensively marks it as a potential intermediate short term top. On the other hand, the RSI, which is a lead indicator to has formed a lower top and is seen inching downwards.

Overall, it is fairly clear from the technical structure of the Chart and the lead indicators that the upsides in the Markets will continue to remain vulnerable to profit taking bouts. We recommend remaining much light on the overall exposure and keep it moderate. Profits should be protected very vigilantly at higher levels. There are chances that the session may remain volatile owing to expiry of the current derivative series. It is advised to continue maintaining a cautious view on the Markets as the upsides may remain capped unless the 10410 is breached on the upside. Out-performance is likely to remain limited to certain select pockets.

MARKET OUTLOOK FOR WEDNESDAY, NOV 29, 2017
What was initially seen as an continuation of a previous day’s pullback, the session on Tuesday turned bearish as the NIFTY came off nearly 60-odd points from the high point of the day. The last hour and half of the session saw this paring of gains and the benchmark NIFTY50 ended the day with nominal loss of 29.30 points or 0.28%. We enter the penultimate day of expiry of the current derivative series and the session on Wednesday is likely to remain dominated with rollover centric activities. We continue to expect the session to remain in a defined range with the upsides continuing to face resistance at higher levels. 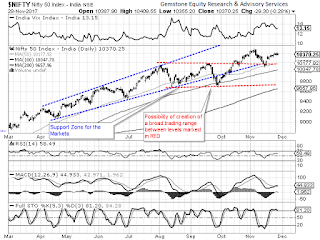 The Relative Strength Index – RSI on the Daily Chart is 58.4885 and it remains neutral showing no divergences against the price. The Daily MACD stays bullish while trading above its signal line. The frequent occurrences of Spinning Tops on Candles evidently portray indecisiveness of Market participants at any given levels.

The pattern analysis show that post forming of 10490 levels as its immediate highs, any likely downsides from the current levels at Close levels will see formation of a lower top. It is further evident from the pattern analysis that unless the levels of 10490 are breached on the upside, no sustainable up move may be seen.

For a clear breakout to occur, the levels of 10490 remain critical. It would not be sufficient for the Markets to give marginal highs at higher levels. It will require a clean break out to occur. Also, going ahead from here, the Market breadth which is little weak and fractured still remains a niggling worry for the Markets. Overall, though no signs of any immediate major downsides, it is very much likely that the upsides will still continue to face resistance and selling pressures at higher levels. It becomes, therefore, important to continue to guard profits at higher levels. Cautious and stock specific approach is advised for the day.

MARKET OUTLOOK FOR TUESDAY, NOV 28, 2017
The  Indian Equity Markets saw a smart recovery from the lows of the day and ended the day with the benchmark NIFTY50 gaining 9.85 points or 0.09%. Though these gains were nominal, the NIFTY saw recovery of nearly 60-odd points from the lows of the day. This session remained significant as the Index managed to keep its head above the 10345-10365 zones. Going into trade on Tuesday, we expect a modestly positive start and see the Markets attempting to further its recovery that it saw in the previous session. 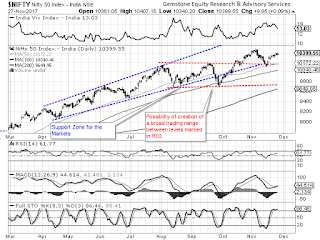 The Relative Strength Index – RSI on the Daily Chart is 61.7720 and it has market a fresh 14-day high which is bullish. Daily MACD has reported a positive crossover and it is now bullish while trading above its signal line. No significant formations were seen on Candles.

The pattern analysis confirm the validation of the 20-DMA of NIFTY as its immediate short term support. The trading of the Index in a very narrow band in sideways trajectory can be translated as its inherent strength which still continues to persist.

All and all, we might see the Markets attempting to further its recovery that we saw today. However, we will still continue to see the session remaining highly sectors and stock-specific. The NIFTY may attempt to further its up move but it will have to move past its previous high for a sustainable breakout. However, it is beyond doubt that the inherent strength in the Markets remains evident. With every corrective bout that we may see due to rollovers that have started, it is recommended that such dips should be used to make select purchases. Overall, while still continuing to guard profits at higher levels, cautious optimism is advised for Tuesday’s trade.

WEEKLY MARKET OUTLOOK FOR NOV 27 THRU DEC 01, 2017
In our previous Weekly note, we had mentioned about the levels of 10345-10365 acting as important resistance area for the Markets. In the Week that went by, the NIFTY50 index continued to resist to these levels for 4 days out of 5 and in the end, attempted to marginally move past it. The benchmark NIFTY50 ended the week with net gains of 106.10 points or 1.03%. In the coming Week, we have expiry coming up for the current derivative series. We will see NIFTY50 oscillating in a broad range. We might see it inching higher and make attempts to test its previous highs but a clear-cut fresh breakout may still continue to elude us. Despite every marginal higher level that the NIFTY may try and attempt, it will continue to remain vulnerable to profit taking bouts at higher levels. 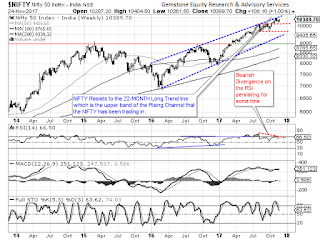 The Relative Strength Index – RSI on the Weekly Chart is 66.2680 and it stays neutral for this week without showing any divergences against the price. The Weekly MACD stays bullish as it trades above its signal line. No significant formations were observed on Candles.

The Pattern Analysis makes it evident that the NIFTY still continues to trade in a 22-month long trading Channel that it has created. It resisted to this 22-month old upper trend line at 10490. However, this resistance has now shifted higher and this has made some room for the Markets to attempt small marginal highs. If we go by Classical Pattern Analysis once again, any higher movement that the Markets may try and attempt will have no strength if the lead indicators continue to throw up Bearish Divergences. Overall, we expect the Markets to oscillate in a broad range over coming week. Though primary trend may not be violated but in the same breath, we also do not expect the Markets to race beyond its recent highs. The Week may remain largely stock-specific. 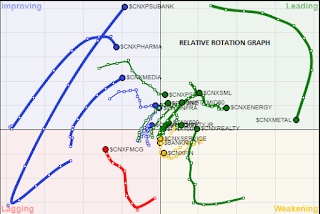 A study of Relative Rotation Graphs – RRG show that the METAL pack may see some individual performance but has overall continued to lose momentum and may increase its under-performance against the benchmark, i.e. NIFTY. We will see INFRA, MEDIA, and IT continue to grossly improve their relative out-performance. Some stock specific out-performances may also be seen from REALTY and MIDCAP universe. FMCG may slightly lag while AUTO Pack may consolidate its performance.  No major relative out-performance may be expected from SERVICES, FINANCIAL SERVICES or Bank NIFTY going ahead in this week.