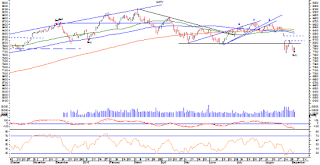 MARKET TREND FOR FRIDAY, SEPTEMBER 04, 2015
Expect the Markets today to open on a modestly negative note and look for directions. The Markets have vigorously attempted to form a base yesterday but it is not completely out of woods as bulk of yesterday’s rise has come on short covering and on lower participation and volumes. For the Markets to form a base at current levels successfully, it will have to see some fresh longs with good amount of participation to help it sustain it.

The RSI—Relative Strength Index on Daily Charts is 36.0036 and it remains neutral as it shows no bullish or bearish divergence or any failures wings. The Daily MACD still remains bearish as it trades below its signal line.

On the derivative front, the NIFTY September futures have shed 92,400 shares or 0.41% in Open Interest. This indicates net short covering in the Markets. Fresh longs have been seen at lower levels but they have been lesser in amount as compared to short covering.

Coming to pattern analysis, the Markets have attempted to form a base near its pattern support levels of 7667 levels. The up move that we saw yesterday have been purely technical in nature as the Markets were trading nearly “oversold” yesterday as per lead indicators. The pullback that we saw yesterday was imminent but it would be more important to see if the Markets successfully forms a  base around these levels. For it to form a base, any more up moves need to be accompanied with fresh longs and not just short covering and also with good participation.

All and all, we have not moved past all global events and the Markets are once again slated to open modestly negative today. Given this fact, the Markets are likely to continue to remain subdued and will see itself trading in a given range with some amount of volatility. Fresh purchases at any lower levels can be made but in modest quantities as the Markets have just attempted a reversal and has not confirmed it. While remaining modestly positive, caution should be exercised at with any up move. 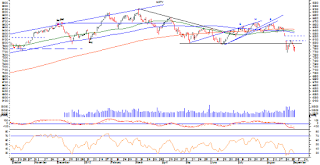 MARKET TREND FOR THURSDAY, SEPTEMBER 03, 2015
We can expect the Markets to open on a relative quiet and calm mode. We might see some modest opening but at the same time, we continue to remain vulnerable to sell offs from higher levels as significant selling in the cash segment continues to be reported by the FIIs. Speaking purely on technical terms, minor technical pullback is likely but at the same time, vulnerability of selling pressure at higher levels remain present.

The RSI—Relative Strength Index on the Daily Chart is 30.3085 and this stands nearly oversold. The RSI does not show any failure swings but shows Bullish Divergence as the NIFTY has set a fresh 14-day low but RSI has not. The Daily MACD remains bearish as it continues to trade below its signal line.

On the derivative front, NIFTY September futures have added over 6.58 lakh shares or 2.98% in Open Interest. This clearly signifies addition of fresh shorts in NIFTY Futures. The PCR stands at 0.99 as against 1.02. However, though short covering can be expected, it can get delayed if the selling in the cash segment continues.

Coming to pattern analysis, if the Markets continue to show weakness, it is likely to test the lows of 7667 levels. However, given the lead indicators, some technical pullback from these levels cannot be ruled out. The level of 7667 is too near to be called a double bottom, but it certainly remains a moderately important pattern support. Having said this, given the overall technical structure of the Markets, even if the pullback occurs, we would continue to remain vulnerable to selling at higher levels.

All and all, the Markets are set to open modestly positive and stable. The Markets are all likely to attempt to create a base at these levels but as mentioned earlier, they remain vulnerable to selling pressure from higher levels. In any case, if the Markets weaken, they are likely to test its previous lows. However, given the shorts in the system, some short covering today at lower levels cannot be ruled out. In event of a pullback, it would be important to see that the Markets pulls back with volumes which would be critically important for forming a bottom for the Markets. 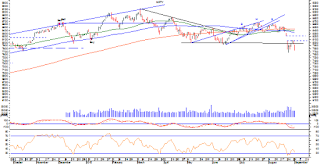 MARKET TREND FOR WEDNESDAY, SEPTEMBER 02, 2015
The Markets are expected to open on a quiet note today and look for directions. After having failed to fill the gaps created on 21st and 24th of August and remaining above 8000-mark, the Markets have continue to remain in the intermediary bear trend. Today as well, even if we see some modestly positive opening and some attempts by the Markets to find base, some amount of volatility and selling pressure from higher levels cannot be ruled out.

The RSI—Relative Strength Index on the Daily Chart is 32.0275 and it does not show any failure swing. However, the NIFTY has formed a fresh 14-day low while RSI has not and this is Bullish Divergence. The Daily MACD continues to remain bearish as it trades below its signal line.

On the derivative front, the NIFTY September futures have added 10,700 shares or 0.05% in Open Interest. This figure remains almost negligible and makes us difficult to reach any conclusion. At least no major short covering has been reported. The shorts created in couple of sessions back continues to exists and may get some covering later today.

Coming to pattern analysis, the Markets have failed to clear its important pattern resistance zone of 7960-8000 levels. Having said this, even if the Markets attempts to move past these levels in near future, it will have to “fill” the gaps that it created on 21st and 24th August of gap downs. Having said this, until this pattern is completed any time in future during a pullback, the Markets will continue to see ranged volatility. The band that the Markets have created in bit large of 200-odd points and it will continue to oscillate in this band with some good amount of volatility ingrained in it with somewhat negative bias. Further, the depth of the Markets also remains a problem as each technical pullback has come with lower volumes.

All and all, the shorts that were seen created in last couple of session continue to exist in the futures segment. Given this thing, the Markets may see a positive opening and some technical pullback but it will continue to remain vulnerable to selling pressure a higher levels. It is advised to continue to refrain from creating any major exposures. The Markets are all set to continue to oscillate in a broad trading range until the major pattern resistance of 7960-8000 levels is cleared. Until this happens, very cautious outlook with extremely stock specific approach is advised. 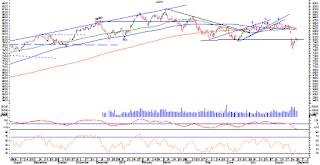 MARKET TREND FOR TUESDAY, SEPTEMBER 01, 2015
We had mentioned in our earlier edition of Daily Market Trend Guide that despite a sharp sell off just couple of day’s back, the Markets are not yet completely out of the woods as yet. Our apprehension holds true today as the Markets are once again slated to open on a negative note, in fact much lower than its important 7960-8000 resistance zones and will look for directions. The Markets anyway have weak structure, technically speaking, and the slightly lower than expected GDP numbers and deficit numbers will aid the ailing sentiment.

The RSI—Relative Strength Index on the Daily Charts is 37.3220 and it continues to remain neutral as it shows no bullish or bearish divergence or any failure swings. The Daily MACD too remain bearish as it trades below its signal line.

On the derivative front, the NIFTY September futures have added over 1.25 lakh shares or 0.57% in Open Interest. There at least a solace that no major unwinding has been reported from higher levels on its way down. In fact, some nominal shorts have been added so for.

Coming to pattern analysis, while pulling back, the Markets have failed to maintain itself above 8000-level and today, as it is slated to open lower, the levels of 7960-8000 zones will continue to act as resistance for the immediate short term. So long as the Markets do not move past these levels and maintain itself above that, it will continue to remain volatile with a downward bias and without any upside conviction. It will continue to portray a bearish undertone so long as it continues to trade below its key pattern resistance of 7960-8000 levels.

All and all, the Markets are slated to open lower and will attempt to find base post lower opening. In last couple of sessions, the Markets have added good amount of Open Interest which indicates existence of shorts in the system. Though the Markets may not make fresh lows, it will continue to remain volatile at any given levels. There is also possible that these shorts itself lend some support to the Markets at lower levels. In any case, the Markets, as of now, completely lacks any kind of directional bias. It is advised to refrain from taking any major exposures until the directional bias gets definite.