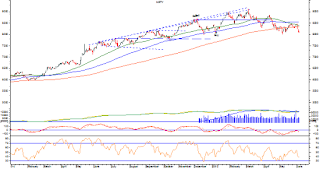 MARKET TREND FOR FRIDAY, JUNE 05, 2015
Today, though we continue to keep our analysis more or less on similar lines, we can expect some pain in the initial trade today. Expect the Markets to open on a negative note today and attempt to find its bottom just like it did yesterday. There are faint chances that we see some improvement post negative opening as we go ahead in the session. The Markets have continued to pile up short position as evident from the F&O data.

The RSI—Relative Strength Index on the Daily Chart is 38.6326 and it has reached its lowest value in last 14-days which is bearish. Though it does not show any bullish or bearish divergence. Daily MACD remains bearish as it trades below its signal line.

On the derivative front, the NIFTY June futures have added over 2.31 lakh shares or 1.44% in Open Interest. This makes it evident that more shorts have been added in the system yesterday and there was also some buying that was seen yesterday in last 90 minutes of the trade.

Taking a cue from pattern analysis, the Markets are expected to hold its bottoms formed on May 7th. It is very much likely that the Markets do not go below 8050 levels and in case of it going below this levels, it will take support on the bottoms formed on May 7th. Possibilities of this happening seem very less as the Markets have already started piling shorts and has shown clear discomfort at levels near 8050. On the upside, the levels of 200-DMA will continue to pose resistance. The Markets have not formed any confirmed bottom and have not shown any clear signs of reversal as of now.

All and all, keeping all of the above in view, we continue to reiterate our advice to remain very light on the overall exposure. Though some bargain hunting can be done, it should be very limited and stock specific. Overall, continuance of highly cautious outlook is advised for the day. 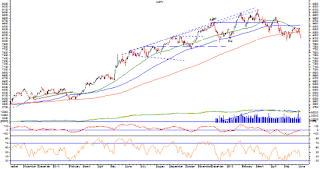 MARKET TREND FOR THURSDAY, JUNE 04, 2015
Today, expect the Markets to open on a modestly positive note and look for directions. We can expect some stability to return in the Markets after two days of volatile declines and expect at least a technical pullback in the initial trade. However, as of now, the Markets trade significantly below its 200-DMA and therefore, this level will continue to act as resistance in coming days. The Markets, as of today, has failed to confirm its reversal on the Daily Charts.

The RSI—Relative Strength Index on the Daily Chart is 38.8160 and reached its lowest value in last 14-days which is bearish. However, it does not show any bullish or bearish divergence. The Daily MACD has reported a negative crossover and it now trades below its signal line.

On the derivative front, the NIFTY June futures have shed 86,050 shares or 0.5% in Open Interest. Though this figure remains insignificant and small, it certainly indicates that there has been some short covering that took place in the final hour of the trade yesterday.

Taking a cue from pattern analysis, the Markets now trades below all of its moving averages and therefore the intermediate trend remains moderately bearish. There will not be any trend reversal from the lows it posted on May7th unless the Markets moves past its moving averages forming a higher bottom. Until this happens, the Markets will continue to trade in a  broad 300-odd points trading range with quite good amount of volatility and with moderately downward bias.

All and all, today, we can fairly expect a technical pullback in the initial trade. However, as it happened in the past, merely short covering will not sustain an pullback and it will have to be replace with delivery based buying. Minor purchases can be made at these levels. Overall, while the Markets attempt to find its bottom, highly stock specific and selective outlook is advised for the day.

The Markets ended nearly 100-odd points down while being in total disregard to its 200-DMA after RBI cut rate by 25 bps on expected lines but made comments about deficient monsoon likely to result in higher inflation and thereby shutting possibilities of any further rate cut amid this scenario.

Today, we can expect a flat to mildly negative opening in the Markets but at the same time, we can expect some stability and mild attempts of a pullback later in the day. The Markets have closed below its 200-DMA and on its way up, this level is likely to act as resistance at Close levels. Though Markets still continue to hold its bottom formed on May 7, and is is less likely that it would test those bottoms again.

However, given the uncertainty and with total lack of directional bias, it is advised to remain moderate on positions. However, these downsides should be used to make selective and stock specific purchases. Though Markets may over all trade in a broad trading range and may see volatility ingrained in it, the lead indicators still indicate some possibility of attempts to have technical pullbacks.
Milan Vaishnav,
Consulting Technical Analyst,
Af. Member: Market Technicians Association (MTA), USA
Af. Member: Association of Technical Market Analysts, INDIA 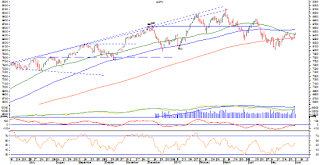 MARKET TREND FOR TUESDAY, JUNE 02, 2015
The Markets are expected today to open on a flat to mildly positive note and look at cues from the RBI Credit policy coming up later today.   The Markets have displayed both – strength and caution – ahead of RBI Credit Policy. After Friday’s up move, it showed strength by not correcting and at the same time, preferred to remain cautious ahead expectation of a rate cut. We will witness ranged trade in the initial session and after that, will see the Markets reacting to the RBI. Volatility will remain dominant today.

The RSI—Relative Strength Index on the Daily Chart is 54.0343 and it remains neutral with no bullish or bearish divergence or failure swings. The Daily MACD continues to remain bullish as it trades above its signal line.

On the derivative front, the NIFTY June futures have further added over 2.46 lakh or 1.56% in the Open Interest. This shows some positive built up for the Markets. In event of a slightest positive trigger, the Markets may attempt its move towards its 100-DMA.

Coming to pattern analysis, the Markets have attempted to confirm a reversal after forming a higher bottom following the low it gave on May 7th.Having said this, it has managed to move past its 200-DMA while doing so and is now resisting at its 50-and 100-DMA. In order to confirm this reversal, the Markets will have to move past these levels. It would confirm the reversal – which is a potential reversal as of now – if it moves past these levels. Until this happens, it would continue to trade volatile in a broad range with the levels of 200-DMA acting as support.

All and all, the Markets will show obvious trend of remaining range bound in the initial trade and then reacting to RBI Credit Policy. So far as the Markets go, the 25 bps is what is discounted by the Markets. No rate cut will be little negative for the Markets and anything more than 25 bps – which is again not likely at all – will be a big positive trigger. It is advised to refrain from creating over exposure in the Markets and continue to adopt a cautious outlook until the Markets take a definite directional bias. 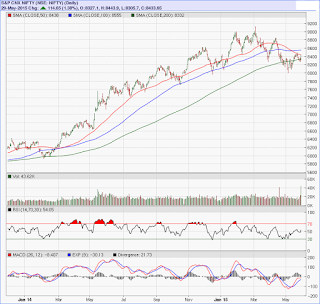 MARKET TREND FOR MONDAY, JUNE 01, 2015
Today would remain a crucial session for the Markets. Expect the Markets to open on a flat note and trade in a range in the initial trade.  On one hand, the Markets have resisted to its 50-DMA at Close and there is 100-DMA ahead of that, and on the other hand, non-technical factors are likely to fuel the bullish bias of the Markets. The GDP Data of 7.5% and 7.3% sequentially and YOY has remain in line with the estimates and other factors such as expectation of rate cut and development in China where debt facilities were drastically reduced are likely to aid the upward bias of the Markets.

On the derivative front, the NIFTY June futures have added over 28.77 lakh shares or massive 22.18% in Open Interest. This is a very clear and very significant indication that there has been huge buying in index futures which is certainly a positive indicator. The NIFTY PCR stands at 0.95.

While taking a look at pattern analysis, the Markets have once again attempted to confirm the reversal after the bottom that it formed on May7th. It has attempted to form a higher bottom after Friday’s up move and it would be critically important to see that the Markets move past its 50 and 100-DMA as well in order to convincingly confirm the bottom formation. However, in event of any untoward movement, the level of 200-DMA will continue to act as support. On the Weekly Chart, the Markets continue to trade above all of its moving averages.

All and all, the Markets have seen a good amount of buying from lower levels. It is advised to continue to make select purchases and the overall bias remains on the upside. However, vigilant protection of profits too is advised as the Markets are yet to move past the 50 and 100-DMA at Close and it is yet to react to RBI Credit Policy tomorrow. Due to all this volatility is likely to continue to remain ingrained in the Markets. Overall, cautious optimism is advised for the day.