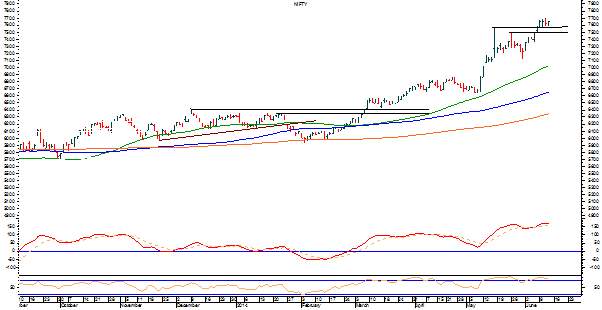 The Markets will see a test from both side as it is likely to react to some domestic as well as global news flow while remaining “overbought” on the Daily Charts and heavily prone to corrective movements. There are minor good news on the IIP figures as well as CPI numbers and on the other hand, there is some air of caution in wake of Iraq events. However, given everything, the Markets remain “overbought” and technically prone to correction setting in.

The lead indicators continue to paint a weary picture. The RSI—Relative Strength Index on the Daily Chart is 77.9962 and it is neutral as it shows no bullish or bearish divergences or any kind of failure swing. However, it continues to trade in “overbought” territory. The Daily MACD continues to trade above its signal line.

On the derivative front, the NIFTY June futures have added over 6.07 lakh shares in Open Interest. The NIFTY PCR stands at 0.88 as against 0.86 on the previous day.

Going by the pattern analysis, as we had pointed out yesterday, the levels of 7700 has now become immediate top for the Markets. Any fresh up move shall occur only after the Markets move past this level. However, given the “overbought” condition on the Daily Charts, any such up move will have very questionable sustainability and would remain prone to equally sharp corrective movement.

Going by this, we now very strictly advice to reduce buying at these levels. There are chances that the Markets opens on a positive note and strengthens as we go ahead in the session. But there are equal chances that the Markets see corrective pressure in the second half. We have global events to speak of, but the technicals on the Daily Charts are enough reason for the Markets to see any corrective movements. Therefore, while protecting profits on the long positions on the upside, continuance of cautious approach is advised for today.

With the levels of 7568 acting as supports and further support at 7510, it is advised to continue to remain light on the positions. While avoiding shorts and maintaining adequate liquidity, very stock specific selective approach with cautious outlook is advised for today. 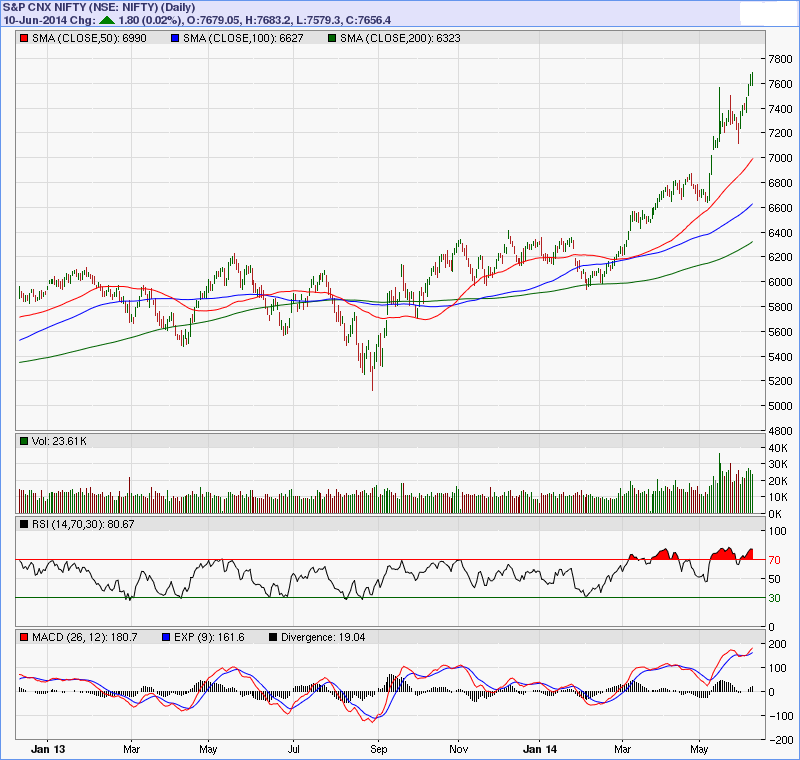 Markets continues to remain overbought and given the pattern analysis, the behaviour of the Markets in coming days is likely to remain similar to what we saw yesterday. The Markets are again expected to open on a quiet and flat note and look for directions. Even if it continues to move up, there remain great amount of chances that the Markets witnesses the correction that it witnessed yesterday in the early trade. Some amount of consolidation / correction remains imminent at these levels which cannot be discounted and ruled out.

The lead indicators continue to paint a precarious picture. The RSI—Relative Strength Index on the Daily Chart is 80.6661 and it does not show any failure swings. However, like yesterday, again the NIFTY has formed a new 14-day high while the RSI has not yet and this make a clear Bearish Divergence again. Further, it continues to trade in “overbought” territory. The Daily MACD trades above its signal line.

On the derivative front, the NIFTY June future added over 9.20 lakh shares or 6.07% in Open Interest. This shows addition of some longs from lower levels that we saw yesterday.
Going by the pattern analysis, the Markets continues to remain in “overbought” territory and given this and up move will remain always open to any sharp correction. This remains overdue, especially given the reading of the lead indicators and the continuing Bearish Divergences.

All and all, we continue to maintain a cautious stand of the Markets. The fresh purchases should be kept limited to highly selective and sector specific stocks and defensives. Here as well, the profits on the upside should be extremely vigilantly protected. We continue to reiterate our advice of maintaining very moderate exposures with high degree of caution in the Markets today. 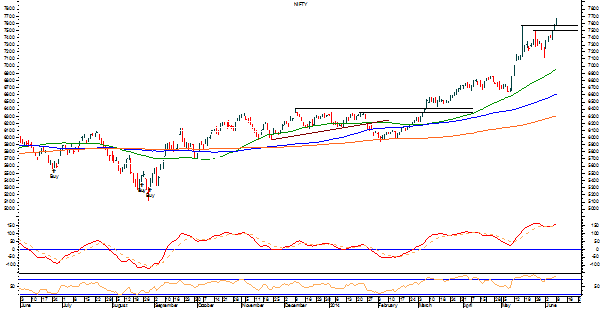 The Markets have risen over 600+ odd points NIFTY in last 6 trading sessions. It now not only trades heavily ‘overbought’ but has not almost entered a euphoric state. The only thing that keeps driving it up is the liquidity chasing the Markets. Given this, today also expect the Markets to open on a flat to mildly positive note and look for directions. Since liquidity cannot be predicted by technical tools, there are high chances that Markets can anytime see a corrective dip which stands heavily overdue and impending.

The might continue to trade in uncharted territory. The levels of 7675 and 7730 might act as immediate resistance. The supports are very much lower at 7560 and 7480 levels.

The lead indicators continue to paint a overheated and euphoric picture of the Markets. The RSI—Relative Strength Index on the Daily Chart is 80.6170 and it does not show any failure swing. However, NIFTY has set a new 14-period high while RSI has not and this is once again Bearish Divergence. Further, it continues to trade in “overbought” territory.

On the derivative front, there is change in the behaviour noticed. While the NIFTY has put up most of its 600+odd points gains while shedding open interest, yesterday it has reported a addition of over 12.40 lakhs shares or 8.90% in Open Interest. The NIFTY PCR stands at 0.84.

While continue to read pattern analysis, the Markets have given a upward breakout on the Daily High Low Charts as well. Now, though this technically generates a fresh buy signal on the Daily Bar Charts, the “overbought” nature of the Markets continue to pose a serious concern now. While liquidity continues to chase the Markets, any dip or sharp wave of correction in the immediate short term just cannot be ruled out.

All and all, while liquidity continues to chase the Markets, any longs, if any, should be taken on extremely selective note in defensives while very vigilantly protecting the profits at higher levels. The reason being the overbought nature of the Markets due to which a corrective action in the Markets, which can be equally sharp, cannot be ruled out. While remaining moderately leveraged, high degree of caution should be continued in the Markets. 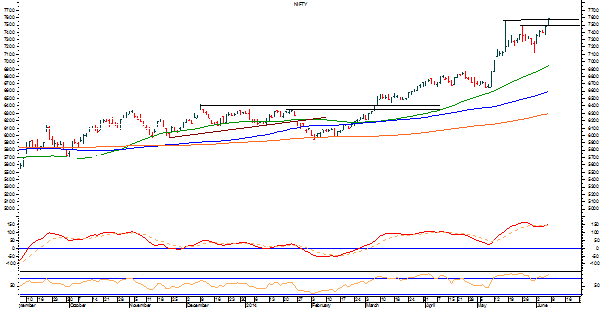 As evident from the Daily Charts, the Markets have given a positive breakout on the Close Charts, and today, as further evident from the bar charts, it would attempt to give a positive breakout on the Daily High Low Charts. Today, expect the Markets to open on a positive note and trade in uncharted territory. Though positive opening expected today, from today onwards, there would be very high degree of chances that the Markets comes off later as we go ahead in the session. While remaining “overbought”, correction at any given point of time is very much impending.

The lead indicators continue to point towards correction at any moment. The RSI—Relative Strength Index on the Daily Chart is 78.6190. It does not show any failure swings. However, importantly, the NIFTY has made a new 14-period high but RSI has not and this is, once gain, a clear Bearish Divergence. Further, it also trades in the “Overbought” territory. The Daily MACD continues to trade above its signal line.

On the derivative front, NIFTY June futures have shed over 1.08 lakh shares or 0.77% in Open Interest. This is a nominal shedding of open interest, but at this juncture, we would like to point out that in previous 3-4 sessions of relentless up move, the Markets have ended up shedding significant amount of open interest.

Going by the pattern analysis, the Markets have already achieved a breakout on the upside on the Close Charts. Today, with positive opening, it would attempt a breakout on the Daily High Low Charts as well. However, as we have been reiterating in our previous editions of the Daily Market Trend Guide, the Markets have been trading heavily “overbought”. Therefore, even with the positive opening today, there would always be a high amount of chances that the Markets sees a temporary sharp downside, even if it is for a very short term.

Going by this, we continue to very strongly reiterate to refrain from fresh buying and over leveraging in the Markets. Buying should be only in defensives and that too on ultra selective basis and profits should be protected very vigilantly on either side. The Markets are rising but any sharp correction, if not today, then in coming days just cannot be ruled out. Overall, while maintaining liquidity, extremely high degree of caution is advised for today.