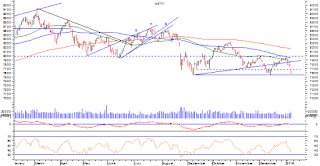 MARKET TREND FOR FRIDAY, JANUARY 08, 2016
The Markets are poised at a very critical juncture. Today, we can expect a quiet opening in the Markets and also a mild technical pullback cannot be ruled out. However, at the same time, it is also important to note that the Markets nearly tested its 52-low support yesterday by trading just a whisker away from those levels. This level is a all important triple bottom support and any breach of these levels will induce weakness in the Markets.

The RSI—Relative Strength Index on the Daily Chart is 34.2071 and it has reached its lowest value in last 14-days which is bearish. It does not show any bullish or bearish divergence. The Daily MACD is bearish as it trades below its signal line. On the Candles, A falling window occurred (where the bottom of the previous shadow is above the top of the current shadow).  This usually implies a continuation of a bearish trend.  There have been 5 falling windows in the last 50 candles--this makes the current falling window even more bearish.  The two candles preceding the falling window were black, which makes this pattern even more bearish. Three black candles occurred in the last three days.  Although these candles were not big enough to create three black crows, the steady downward pattern is bearish.

On the derivative front, the NIFTY January series have added over 7.60 lakh shares or 3.65% in Open Interest. The NIFTY PCR stands at 0.85 as against 0.84 yesterday.

While coming to pattern analysis, the Markets formed yesterday’s low point very near to the 52-week lows of 7540 levels. It nearly tested these levels and thereby has taken support at a triple bottom formation. This is one of the major pattern supports for the Markets. Any breach below these levels will cause some good amount of weakness to creep in the immediate short term.  Though we can expect a flat opening today, it would be very important for the Markets to trade above 7540 levels.

All and all, though we can expect a flat opening in the Markets and even some amount of technical pullback, the Markets are not completely out of the woods. The protection of levels of 7540 will be of critical importance for the Markets.  It is advised to refrain from creating any fresh positions even in event of a mild technical pullback. Overall, continuance of cautious outlook is advised for today. 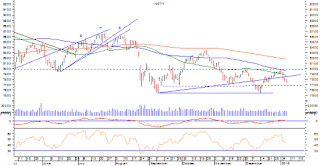 MARKET TREND FOR THURSDAY, JANUARY 06, 2016
The Markets are poised for a gap down opening following weakness in the Asian peers due to rout in the Chinese Markets. We will not stay unaffected as the technical factors on the Daily Charts too remain weak. We will see the Markets opening gap down and remain with bearish undertone in the initial trade. However, there are faint chances that the Markets improve going ahead in the session but at the same time, it is likely to test and breach its logical pattern support of 7680 if the opening weakness persist.

The RSI—Relative Strength Index on the Daily Chart is 42.8643 and it has reached its lowest value in last 14-days which is bearish. It does not show any bullish or bearish divergence. The Daily MACD has reported a bearish crossover and is now bearish as it trades below its signal line.

On the derivative front, the NIFTY January series have added over 99375 shares or 0.48% in Open Interest. This figure, singularly speaking, remains negligible. However, there has been significant unwinding seen in the Cash segment along with existing shorts in the F&O segment.

Coming to pattern analysis, the Markets have breached its important pattern support of 7820-7840 range which exists in form of a rising trend line. Following that, the same levels acted as resistance as the highs of the days following the breach are below that rising trend line. Following weak opening which is almost imminent today, these resistance levels remain sacrosanct and we will continue to see weakness continuing in the Markets. If weakness persists and if the Markets show no signs of improvement, it is logically likely to test the other important pattern support zone of 7650-7680 range. Though it is not likely to happen immediately but any breach of these levels will see serious weakness creeping into the Markets in the immediate short term.

Overall, the outlook for today looks thoroughly bearish as gap down opening remains imminent. Over and above that, even if we see some improvement as we go ahead in the session, the same is likely to remain temporary as the Markets will continue to trade below its key resistance levels. Overall, it is advised to avoid any fresh purchases and maintain cautious to negative outlook on the Markets for today. 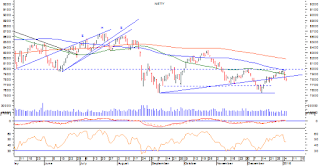 MARKET TREND FOR WEDNESDAY, JANUARY 06, 2016
Today’s analysis continues to remain more or less similar on yesterday’s grounds. We can expect the Markets to open on a flat note with a modestly bearish note and look for directions. The Markets have resisted today to the upward rising trend line as evident on the Charts. This level will continue to resist even if the Markets see any technical pullback. This level, until crossed on the upside, will continue to pose as a major pattern resistance in the immediate short term.

The RSI—Relative Strength Index on the Daily Chart is 45.5712 and it remains neutral as it shows no bullish or bearish divergence or any failure swings. The Daily MACD continues to remain bullish as it trade above its signal line.

On the derivative front, NIFTY January series have gone on to add another over 4.75 lakh shares or 2.35% in Open Interest. This signifies some more addition of short positions in the Markets.

While having a look at pattern analysis, we had mentioned in our yesterday’s edition that he Markets have breached a pattern support which existed in form of a rising trend line. Now, it was all likely that that pattern / rising trend line would act as resistance. Yesterday, precisely in line with this observation, the Markets formed its intraday high below this level and therefore this level continued to pose resistance.  While keeping today’s analysis similar on yesterday’s lines, this rising trend line will continue to act as resistance in the immediate short term so long as the Markets trade below that. For any up move to occur, the Markets will have to move past these levels. Until that happens, all we would see would be mere technical pullbacks which would always remain susceptible to intermittent selling bouts.

All and all, the Markets, though are stable than a day before, are not completely out of the woods. Any sustainable up move shall occur only above 7850 levels and until that happens the Markets are likely to oscillate in a range even in event of technical pullbacks. It is advised to continue to remain modest on exposures while maintaining a cautious outlook on the Markets. 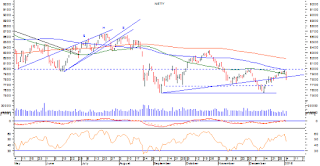 MARKET TREND FOR TUESDAY, JANUARY 05, 2015
Markets may see some breather from the weakness that it saw yesterday but at the same time, some amount of bearish undertone is likely to persist for the immediate short term. The Markets are set to open on a quiet note and look for directions. It has breached certain levels yesterday and on the way up today, they are likely to pose some resistance to the Markets.  The Markets have penetrated the support of rising trend line and this is likely to pose resistance to the Markets going ahead.

The RSI—Relative Strength Index on the Daily Chart is 45.9819 and it remains neutral as it shows no bullish or bearish divergence or any failure swings. The Daily MACD stays bullish as it trades above it signal line.

On the derivative front, the NIFTY January series have added over 8.04 lakh shares or 4.14% in Open Interest. This clearly indicates addition of fresh shorts in the system.

Coming to pattern analysis, we have been mentioning often in our previous edition of Daily Market Trend Guide that the levels of 100-DMA and 8000, have remained sacrosanct. These levels once again continued to remain major resistance for the Markets. In yesterday’s session, the Markets have violated one important pattern support. This pattern support is in form of a rising trend line drawn from the lows of the Markets which it formed in September 2015. The Markets have violated this support and therefore in event of any pullback, this level might pose some resistance to the Markets.

All and all, volatility and uncertainty will rule the Markets in the immediate short term. With the yesterday’s downside, the structure of the Charts have somewhat got damaged to some extent and it will a while by the time the Markets gathers its momentum on the upside once again. The levels of 7840-7860 will continue to pose resistance in event of any pullback. It is advised once again to remain very selective on stocks and curtail the overall exposures in the Markets for the immediate short term.