As mentioned here  since  last several trading days, the markets continue to be affected by year end holiday inertia. As foretold, the markets are experiencing resistance at its 50 Simple Moving Average, which is 8300 as of today.

Expect the Markets to open on a positive note and attempt to move past its 50-DMA. If the Markets opens and trade above that, we may see successful attempt of continuation of pullback after few days of consolidation on lower volumes. 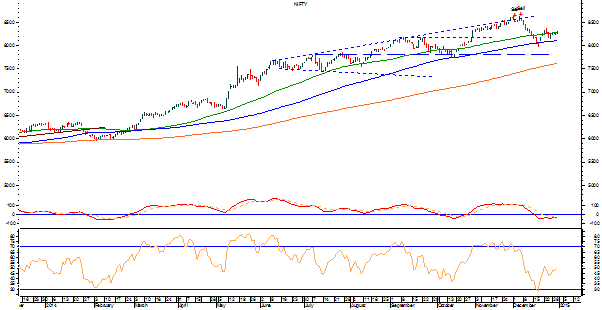 The Markets would continue to witness a typically holiday affected session once again as the Markets are likely to remain in slumber as they have been doing since last couple of sessions. We can expect a quiet opening and we would continue to see the levels of 50-DMA being the crucial levels to watch out for. In case of higher opening, the Markets will have to make sure to maintain itself above the 50-DMA levels in order to avoid remaining in sideways consolidating range.

The RSI—Relative Strength Index on the Daily Chart is 50.2596 and it remains neutral as it shows no bullish or bearish divergence or failure swings. The Daily MACD remains bearish trading below its signal line but at the same time it is slowly but steadily moving towards giving a positive crossover.

On the derivative front, the NIFTY January futures have shed over 1.48 lakh shares or nominal 0.69% in Open Interest. This shows very mild profit taking ahead of a year close but certainly this figures remains an insignificant one.

Going by trend and pattern analysis, the Markets, as we have been mentioning in our previous couple of editions of Daily Market Trend Guide, has been resisting to its 50-DMA levels while attempting a pullback after making recent lows in mid December. It would be necessary for the Markets to move past these levels with conviction in order to successfully continue with the up move. However, the Markets are seeing some listless sessions due to lack of participation on account of year end holidays.

Overall, the trend continues to remain intact. We would see some good gains if the Markets moves past its 50-DMA and stays about that level in the immediate short term. However, we may see some listless activity due to holidays and therefore see some real momentum coming in the Markets only from next week. However, while maintaining adequate liquidity, cautious optimism is advised for the day. 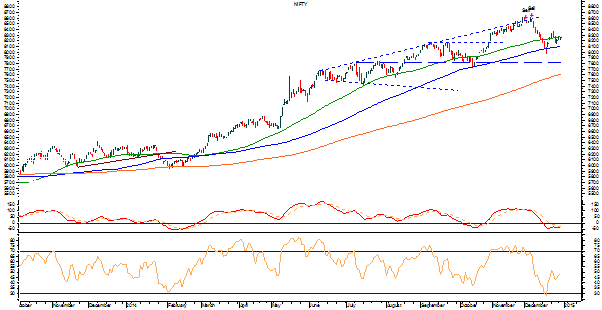 Markets have traded nearly on dotted lines have been seeing sessions typically affected by holiday season. Such sessions are characterized by very low participation and sedate volumes. While keeping the analysis more or less on similar lines, the Markets are again likely to see modestly positive opening. At the same time, the levels of 50-DMA which has continued to act as resistance at Close levels would be important levels to watch out for.

The RSI—Relative Strength Index on the Daily Chart is 47.8140 and it continues to remain neutral while showing no bullish or bearish divergences or failure swings. The Daily MACD remains bearish while trading below its signal lines.

On the derivative front, the NIFTY January futures have added another over 2.20 lakh shares or 1.04% in Open Interest. This shows that there have been less, but some modest buying that is being witnessed from lower levels.

Overall, though it would be necessary for the Markets to move past the levels of 50-DMA and above, the chances of this happening are higher as supported by F&O data. Until this happens, this level would be critically to watch out for. Again, once can certainly continue to make very selective purchases as stock specific action would continue. 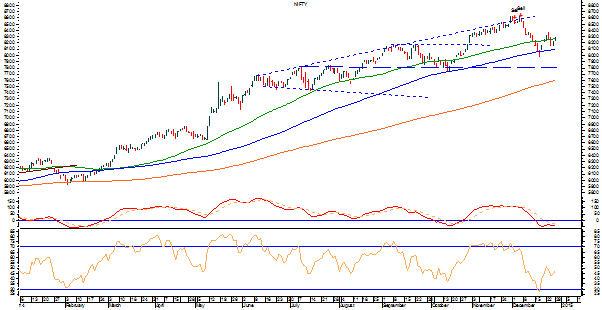 The analysis for the Markets continue to remain on similar lines as the Markets have continued to resist at its 50-DMA. The Markets may see a modestly positive opening again and may inch upward in the initial trade. The Markets have attempted to continue with its pullback as it has formed a higher top and higher bottom on the Daily Charts but the levels of 50-DMA would be crucial to watch out for.

The RSI—Relative Strength Index on the Daily Chart is 47.7073 and it is neutral as it shows no bullish or bearish divergence or failure swings. The Daily MACD continues to remain bearish as it trades below its signal line.

On the derivative front, the NIFTY January futures have added over 3.82 lakh shares or 1.85% in Open Interest. This shows some fresh buying has been seen in the Marketts.
Going by the trend and pattern analysis, the Markets saw a sharp correction from its lifetime high levels and went on to correct over 66% from its top. It touched an intraday low of 7961.35 on 17th of December and has thus attempted a pullback from there. On its way up, the Markets have been resisting to its 50-DMA levels which is 8272 today. It would be necessary for the Markets to move past and trade above this level to continue with its pullback successfully.

Overall, the volumes are likely to continue to remain sedate due to holidays. However, the general trend is likely to remain intact and we might see gradual inching up of the Markets. In event of any downside, it is not expected be any major decline. It is advised to continue to make selective purchases while keeping adequate amount of liquidity. Stock specific and sectoral out performance is likely as well. Though we might see some ranged movements and some more resistance at current levels, the overall trend continue to remain intact. 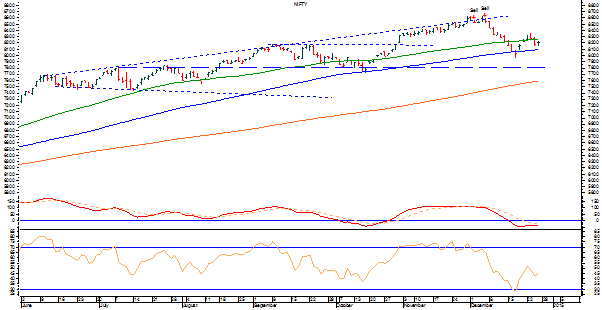 The Markets are likely to see quiet to mildly positive opening again but overall, it is likely to continue with a sedate performance on lower volumes due to year-end holidays. The levels of 50-DMA would be important and it would be critically important for the Markets to move past the 50-DMA levels in order to continue with its pullback.

The RSI—Relative Strength Index on the Daily Chart is 44.6264 and it remains neutral as it shows no bullish or bearish divergence or failure swings. The Daily MACD continues to remain bearish while trading below its signal line. On the Weekly Charts, the Weekly RSI is 58.4898 and this too remains neutral without showing any bullish or bearish divergence or any failure swings. The Weekly MACD too remains bearish while it trades above its signal line.

On the derivative front, NIFTY January futures have shed nominal Open Interest of over 1.47 lakh shares or 0.71%. This shows no major offloading was witnessed in the previous session.

Going by pattern analysis, there is no major breach on the Daily as well as Weekly Charts. The Markets have dipped below its 50-DMA and it will have to move past this level again in order to continue with its pullback. During the downside, there has been near-absent volumes. The lack lustre Markets are more due to lack of participation than due to weak technicals.

Overall, one can continue to make very selective purchases. The volumes are likely to continue to remain thin due to year-end holidays. However, given everything, the 50-DMA levels would continue to remain crucial and it would be important for the Markets to move past that level. While overall trend continuing to remain intact and with no major downside seen, positive caution is advised for the day.