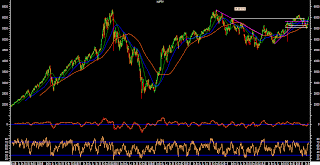 Today, expect the Markets to open flat and look for directions. The Markets shall violently react to the RBI Credit Policy due later in the morning today. The Markets are expected to trade in a range until then and start reacting once the RBI comes out with its announcements. The Markets are pitching in for 50 basis points cut, but it is also likely to react to the macroeconomic report which does not paint a rosy picture.

The RSI—Relative Strength Index on the Daily Chart is 68.4870 and it has reached its highest value in last 14-days which is bullish. However, it does not show any bullish or bearish divergence. The Daily MACD is bullish as it continues to trade above its signal line. Candles show potential creation of top for the Markets. An engulfing bullish line occurred If the engulfing bullish pattern occurs during an uptrend (which appears to be the case with NIFTY), it may be a last engulfing top which indicates a top.  The test to see if this is the case is if the next candle closes below the top of the current (white) candle's real body.

On the derivative front, NIFTY has added a over 21.91 lakh shares or over 13.26% in Open Interest. However, though this is a positive sign, any significant up move shall make the Markets OVERBOUGHT.

Having said this, there are mixed signals, speaking purely on technical terms. The lead indicators show some potential still left on the upside, the candles show a potential  top formation. However, if we read the fundamentals along with this, the markets may react to the macroeconomic concerns and also the RBI policy and this is likely to be a volatile affair. Even if the Markets gains in the initial trade, it would trade around its overbought levels again.

All and all, even if the Markets gains in the initial session, ahead of RBI Credit Policy announcements, there are very high chances that we may see correction from higher levels. Any up move that is seen from today onwards should be used for booking and protection of existing profits and aggressive buying at these  levels should be strictly avoided. It is advised to approach the Markets with high degree of caution from today onwards until a healthy consolidation or correction is seen. 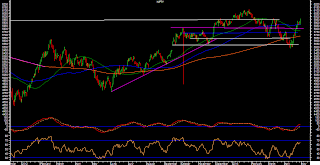 Today, expect the Markets to open on a flat to modestly negative note and look for directions. The Markets are witnessing consolidation and are likely to face it today as well. The Markets trades near its pattern resistance and therefore the volatility that we saw in the previous session is likely to remain today as well.

For today, the levels of 5950 and 5972 are important resistance levels for today. So far as supports are concerned, supports come in at 5905 and 5860 levels.

The lead indicators show some signs of weariness as RSI—Relative Strength Index on the Daily Chart is 64.7729 and it shows no failure swings. However, NIFTY has given a new 14-period high but RSI has not and this is Bearish Divergence. The Daily MACD continues to remain bullish as it trades above its signal line. On the Candles, A doji star occurred (where a doji gaps above or below the previous candle).  This often signals a reversal with confirmation occurring on the next bar.

On the derivative front, NIFTY has added over 3.65 lakh shares or 2.26% in Open Interest which shows some addition of long positions. The NIFTY PCR stands at 1.08 as against 1.05.

Having said this, it is important to note that the Markets trades near its pattern resistance levels being in 15-25 points range. Given this as well as some moderate signs on lead indicators for some potential weakness, it cannot be ruled out that the Markets may again see some minor profit taking from higher levels, even if it opens and trades positive. With the OI being added, this may also fuel some volatility in the Markets.

All and all, the Markets are likely to see some amount of volatility and the possibilities of some more consolidation / minor correction cannot be ruled out as it trades near its pattern resistance. Further, it is also likely to react to the RBI Policy announcements tomorrow wherein some rate cut is expected, so volatility will refuse to go away. Having said this, it is advised to approach today’s session with high degree of caution and discipline and very selective approach should be adopted for today. 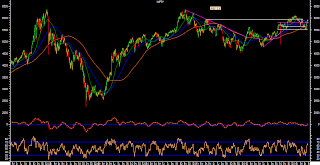 Today, we can expect the Markets to open on a modestly positive note and continue with its up move at least in the initial trade. Thereafter, it would be important for the Markets to remain in positive rising trajectory in order to sustain and capitalize on opening gains. It will have to move past the congestion zone in order to achieve further sustainable up move.

On the derivative front, the NIFTY May futures have added over 3.46 lakh shares or 2.19% in open interest. This is little positive as it shows that the yesterday’s sharp rise that we saw in the last hour saw some fresh longs being added and it was not merely on account of short covering.

Overall, the Markets will have to move past the levels of 5925-5930 in order to have further sustainable up move. Until this happens, we may still continue to see  the Markets trading in a capped range while being little volatile.

All and all, though the Markets will see further sustainable up move only beyond the levels of 5925-5930, the bias, as of now remains on the positive. However, aggressive longs should be added only after it moves past these levels on a comprehensive basis. Until this, it is advised to continue taking fresh positions on highly selective basis. Shorts, at this stage should be avoided. Overall, continuation of cautious outlook is advised for today. 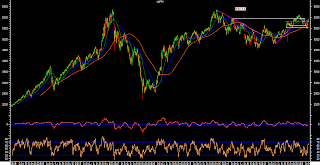 The analysis for today would remain more or less similar to that of Friday. The Markets have shown signs of much required correction setting in. For today, the Markets are expected to open on a flat note and look for directions. Most likely, it would continue to remain in consolidation / corrective mode. Intraday trajectory would continue to remain very important today.

On the derivative front, NIFTY May futures have added over 7.97 lakh shares or 5.31%  in Open Interest. The NIFTY PCR stands unchanged at 1.05.

The overall reading is that the Markets are expected to remain in a broad trading range. It can see consolidation or even continue to see minor correction from these levels. The levels of 5925 would now be important. The Markets will have to move past these levels to continue with its up move.

All and all, as mentioned above, possibilities continue to exist for the Markets to continue to remain in consolidation / corrective mode. The levels of 5925 would be important to watch out for and fresh sustainable up move shall occur only above these levels. Until this happens, we will continue to see the Markets trade in a broad range and consolidate. With chances of minor profit taking continue to exist, volatility can be seen. Cautious outlook is continued to be advised for today.