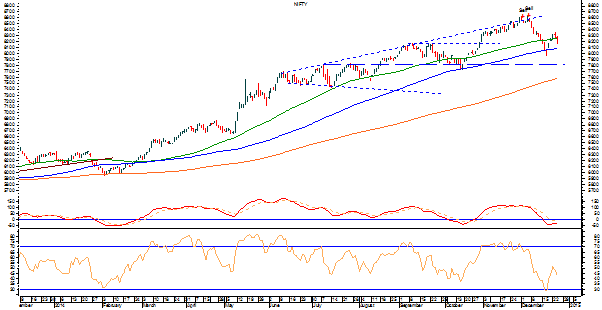 The Markets would open after Christmas holiday but only for Friday’s session to be followed again by a weekend. The Markets are likely to see quiet opening and no major moves are expected as the volumes are expected to remain on lower side due to holidays. However, it would continue to resist to its 50-DMA levels again on the upside as it has closed below that.

The RSI—Relative Strength Index on the Daily Chart is 42.8010 and it remains neutral as it shows no bullish or bearish divergence or failure swings.  The Daily MACD continue to remain bearish while trading below its signal line.

On the derivative front, the NIFTY January series have added over 49.18 lakh shares or 30.85% in Open Interest. The overall NIFTY and Market wide rollovers have remained slightly below its 30-month average.

Returning to pattern analysis, the Markets have dipped below its 50-DMA level again and therefore this level would act as resistance on its way up again. It would be very necessary for the Markets to move up and past this level in order to avoid any weakness from creeping in again. On the downside, the levels of 100-DMA remains a major support for the Markets.

Overall, given the near-absent volumes again, the Markets are less likely to see any major downsides again. However, the volumes would continue to remain lighter due to holidays and truncated trading week. It is advised to continue to remain light on positions and maintain liquidity. Purchases should be restricted to selective stocks and shorts should be strictly avoided as the overall trend continues to still remain intact. 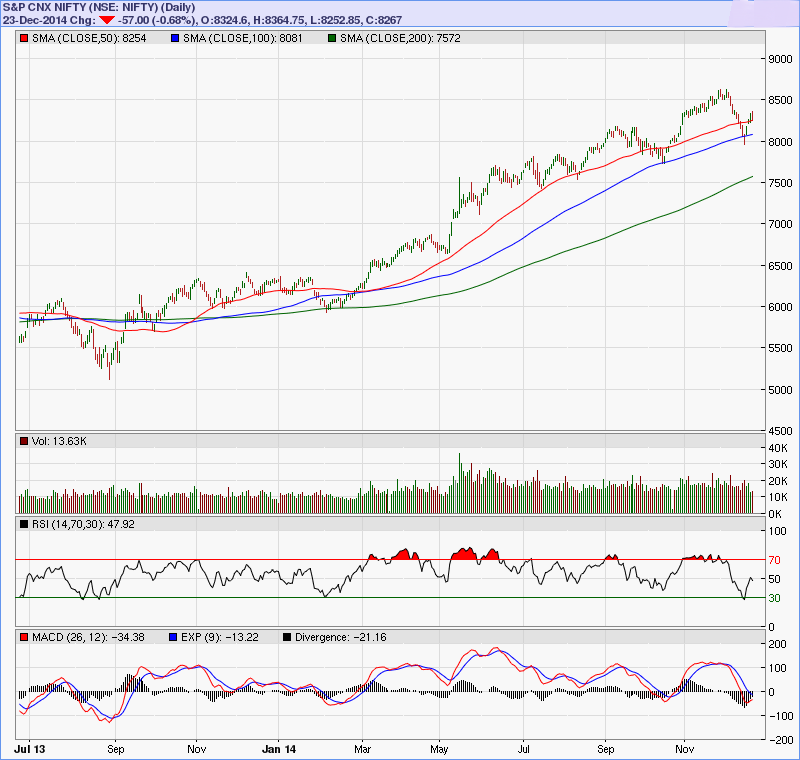 This session remains crucial for the Markets. First, we have a truncated week with Thursday being a holiday on account of Christmas; and second, because of this, we have a expiry coming up a day ahead. Keeping technicals in view, the Markets are again likely to witness a quiet opening and might trade range bound in initial trade. The levels of 50-DMA, 8254, would be crucial and the Markets should trade above that to avoid any weakness from creeping in again.

The RSI—Relative Strength Index on the Daily Chart is 47.95 and it remains neutral as it shows no bullish or bearish divergence or any failure swing. The Daily MACD continues to trade bearish as it trades below its signal line but is attempting a positive rollover in coming sessions after getting flattened out.

On the derivative front, NIFTY December futures shed over 45.90 lakh shares or 25.58% in
Open Interest. The January series added over 51.53 lakh shares or 47.76% in OI. The rollovers continued and remained in line with its previous 3 months average.

Going by the pattern analysis, as we had mentioned in our previous edition of Daily Market Trend Guide, the Markets have consolidated after nearly 360-odd points of pullback. Also, as expected, it has attempted to take support at its 50-DMA levels. It would be of key importance for the Markets to maintain levels above its 50-DMA.  So long as it remains above 50-DMA levels, it would consolidate and once again attempt to continue with its pullback.

Overall, being expiry day, the session is likely to remain dominated with rollover centric  activities. The volumes have remained on much lower side and this is good in case of downsides. Any up move will have to be accompanied with good participation. The 50-DMA would be crucial to be watched out for and it would be imperative for the Markets to trade and maintain itself above that. Overall, while maintaining controlled exposure, positive caution is advised for the day. 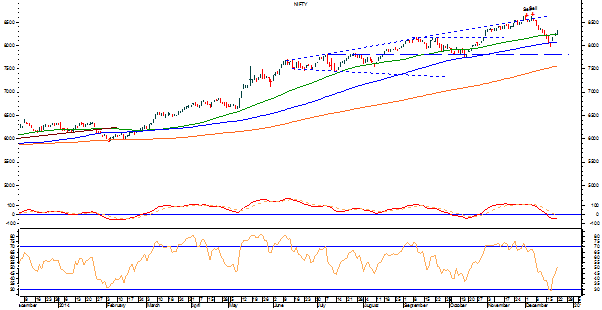 Technically speaking, the Markets have ended the day near its high point and it is likely to open positive and continue with its up move at least in the initial session. However, we enter the penultimate day of expiry of current series as Thursday remains a holiday on account of Christmas. The session is likely to see a volatile rollover dominated movements and the levels of 50-DMA would continue to once again act as support.

The RSI—Relative Strength Index on the Daily Chart is 51.4321 and it remains neutral as it shows no bullish or bearish divergence or any failure swing. The Daily MACD continues to remain bearish while trading below its signal line.

Going back to pattern analysis, the Markets have seen a pullback of nearly 360-odd points from its intraday low on 17th of December. However, while doing that, it has maintained its support on 100-DMA at Close levels and have moved past its 50-DMA to Close above that. Now, in order to continue with its up move / pullback, even if the Markets sees some consolidation or mild profit taking, the levels of 50-DMAare expected to act as support once again at Close levels.

Overall, though the pullback and the factors affecting it remain intact, some amount of volatility induced by rollovers cannot be ruled out. It may happen that the Markets witness some mild profit taking after a pullback of 360-odd points from its intraday lows and due to this some amount of volatility may remain ingrained. However, overall no major downside is expected in the Markets. With stock specific approach being maintained, cautious optimism is advised for the day.

Markets will now see a very important session as it has resisted to its 50-DMA levels at Close. We are likely to see a quiet to modestly positive opening and the levels of 8235, which is the 50-DMA for the Markets would be the critical levels to watch out for. It would be critically important for the Markets to open or move past this level in order to avoid any weakness from keeping in again. The intraday trajectory would also remain equally important.

The RSI—Relative Strength Index on the Daily Chart is 44.9466 and it is neutral as it shows no bullish or bearish divergence or any failure swing. The Daily MACD still continues to remain bearish trading below its signal line but has flattened out.

Overall, while continuing with policy of maintaining limited exposure in the Markets, some minor purchases in very selective manner can be made. Even if we see some minor range bound swings, they would remain rollovers dominated and therefore stock specific action and sectoral out performance would remain. While remaining highly selective and stock specific, positive caution is advised for the day.