MARKET TREND FOR FRIDAY, DECEMBER 04, 2015
Knee-jerk reaction to the lesser-than-expected stimulus from ECB would be not as sharp as the European Markets but we can certainly expect our Markets to open on a lower note and look for directions. Some amount of weakness may continue to persist for some more time but the intensity is not expected to be sharp. The volumes and participation is likely to remain lower as well.

The RSI—Relative Strength Index on the Daily Chart is 44.0825 and it remains neutral as it shows no bullish or bearish divergence or any failure swings. The Daily MACD continues to remain bullish as it trades above its signal line.

On the derivative front, the NIFTY December futures have added 30,750 shares or 0.16% in Open Interest. This figure remains nominal but we can certainly interpret that there has been no major offloading of positions in yesterday’s session.

While having a look at pattern analysis, it is largely evident that after attempting to break out of the congestion zone that the Markets formed in November, it greatly resisted to the 8000-levels which also happened to be its major pattern resistance and it also coincided with its 50-DMA. While the Markets failed to take any directional call around these levels, it lost ground failing to get any triggers. Now, the Markets are likely to enter and remain once again into that congestion zone and might drift lower lacking any directional guidance. However, during all this the volumes are expected to remain lower and there can be some technical pullbacks as well.

Going by all this, given the direction-less nature of the Markets it is best advised to avoid taking any fresh positions. Though the Markets are drifting lower, it may also see some pullbacks as well but overall is not likely to take any clear directional bias in immediate short term. It is advised to keep exposure at very modest levels while preserving liquidity and continuing to adopt a cautious outlook on the Markets. 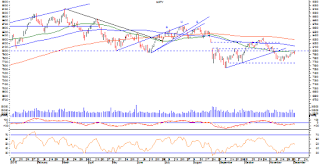 MARKET TREND FOR THURSDAY, DECEMBER 03, 2015
Today’s analysis once again continues to remain more or less on similar lines. The Markets are likely to open on a modestly negative note and look for directions. Though the Markets have attempted to move out of the congestion zone, it is continuing to resist to its pattern resistance and 50-DMA levels which exist in the range of 8000-8005 levels. Until the Markets manage to move past these levels, we will continue to see subdued movements with the Markets continuing to remain vulnerable to selling pressures from higher level.

The RSI—Relative Strength Index on the Daily Chart is 49.4371 and it remains neutral as it shows no bullish or bearish divergence or any failure swings. The Daily MACD continues to remain bullish as it trades above its signal line.

On the derivative front, the NIFTY December futures have shed over 1.63 lakh shares or 0.84% in Open Interest. This figure does not suggest any major shift of sentiment in the Markets. The NIFTY  PCR stands at 0.84 as against 0.87.

Coming to pattern analysis, the Markets have continued to resist to its key pattern resistance levels of 8000. As mentioned earlier, the 50-DMA of the Markets is 8003 and these two levels collectively pose a important resistance to the Markets. It would be critically important for the Markets to move past these levels if it has to make any decisive up move. Not only will the Markets have to move past these levels, it will have to do it with good amount of participation and volumes as well. As often mentioned in our previous editions, until this happens, the Markets will continue to trade in a range with intermittent selling bouts from higher levels even if the undertone remains buoyant.

All and all, while keeping the analysis on the same lines, we continue to reiterate to refrain from shorts as both lead indicators and F&O data suggest underlying buoyancy in the Markets. Somewhat sentimental reactions can be expected to the ECB meet today wherein some stimulus are expected but overall, speaking purely on technical terms, fresh up moves will occur only above 8000-8010 levels.  Until then, highly stock specific approach with protection of profits at higher levels should continued to be adopted. 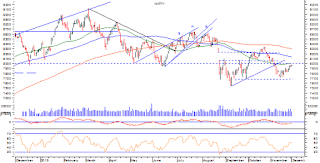 MARKET TREND FOR WEDNESDAY, DECEMBER 02, 2015
Markets have been making reluctant attempts to move past its congestion zone and today as well, we are likely to see a modestly positive opening in the Markets. Though the Markets are now past the outcome of GDP numbers, IIP Data and RBI Credit Policy review, it has not been taking a clear directional call as it trades near its pattern resistance. Today’s opening too would see the Markets opening around its resistance levels and therefore the intraday trajectory that the Markets form after opening would be crucial to watch out for.

The RSI—Relative Strength Index on the Daily Chart is 51.4716 and it has reached its highest value in last 14-days which is bullish. It does not show any bullish or bearish divergence. The Daily MACD remains bullish as it continues to trade above its signal line.

On the derivative front, the NIFTY December futures have added over 3.03 lakh shares or 1.58% in Open Interest. The NIFTY PCR stands at 0.87 as against 0.91 yesterday. The Markets have been seen building a base in this range and this keeps the undercurrent buoyant.

While having a look at pattern analysis, the Markets have been attempting to move out of the congestion zone that it has been trading in the previous fortnight. However, though the Markets have managed to move out of this zone, it has not done so decisively and with conviction. It has been making a reluctant up moves and at the same time, it is also approaching its important pattern resistance which also coincides with its 50-DMA. It would be important to see the behavior of the Markets vis-à-vis these levels.

All and all, for any decisive up move to come in, the Markets will have to move past the levels of 8000-8010 which happens to incorporate an important pattern resistance as well as the 50-DMA. Until this happens, we will continue to see the Markets trading in a capped range and also remain susceptible to selling bouts from higher levels. However, with the lead indicators suggesting the undertone being buoyant, stock specific approach with selective but limited buying should be adopted while continuing to protect profits at higher levels. 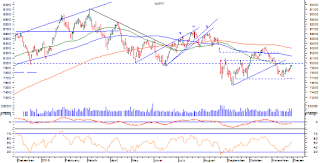 MARKET TREND FOR TUESDAY, DECEMBER 01, 2015
The GDP Numbers that came out stood at 7.4%, little better than the estimates of 7.3% and the IIP numbers too remained in line with the expectations. The Markets are set to open on a flat to quietly positive note following this and would look forward to RBI Credit Policy review which is slated to come up later today. However, it is important to note that with no rate cut expected this time, it is very much likely to remain a non-event.

The RSI—Relative Strength Index on the Daily Chart is 49.8733 and it remains neutral as it shows no bullish or bearish divergence or any failure swing. The Daily MACD continues to remain bullish as trades above its signal line.

On the derivative front, the NIFTY December futures have added over 4.74 lakh shares or 2.54 lakh shares in Open Interest. Though the Markets have traded in a capped range, fresh positions have been built in the index as well as stock futures resulting in addition of Open Interest.

Coming to pattern analysis, the picture remains similar to what we explained in the yesterday’s edition. The Markets have attempted to form a base but are yet to confirm it. In event of any up move, they are likely to approach its pattern resistance levels of 8000 which also coincides with its 50-DMA. The Markets will need to move past these levels for any decisive directional call. Until the Markets resist these levels, we will continue to see a range bound congestion zone continuing to exist with the Markets remaining vulnerable to selling bouts.

Overall, the opening is expected to be quiet and positive and the Markets are likely to trade in a capped range until it reacts to the RBI Policy Review. With no rate cut expected, this too is likely to remain a non-event. The markets will be able to make a decisive directional call only after it moves past 8000-levels. Until this happens, it will continue to lack any directional bias though the undercurrent remains positive.