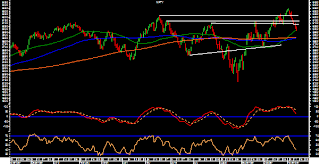 Today, we are likely to see some respite from the downtrend that we have been witnessing since last 7 sessions. The Markets are likely to open on higher and positive note and look for directions. The key would be to see if the Markets are able to sustain the opening gains and maintains itself above the important support levels of 50-DMA.

For today, the levels of 6040 and 6065 would act as immediate resistance levels for the markets. The supports exist at 50-DMA further down at 5950 levels.

The RSI—Relative Strength Index on the Daily Chart is 40.4973 and it has reached its lowest levels in 14-days which is bearish. However, it does not show any bullish or bearish divergence. The Daily MACD continues to remain bearish as it trades below its signal line.

On the derivative front, the NIFTY November futures has went on to shed yet another 6.30 lakh shares or 3.22% in open interest. This signifies that the profit taking resumed yesterday after taking a brief break a day before.

Going by the above reading, it is clear that though the Markets are strongly attempting to find a  bottom for themselves, it is not completely out of the woods as yet. Today though we are set to see a positive opening, it would be very critically important to see that the Markets maintains the levels above of its 50-DMA which is 5984. Any breach below this levels again would see more weakness creeping into the Markets.

Overall, we can certainly expect a modestly positive start but one has to keep in mind that the Markets have attempted to find a bottom but there is no confirmation as yet. So, even with positive opening, it is advised not to make excessive purchases and continue with policy of preservation of liquidity and open positions. The intraday trajectory and sustenance of levels above of 50-DMA would be critically important for the Markets today. 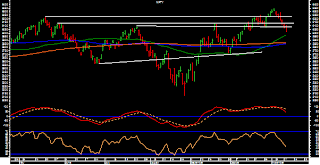 Today would be very critical session for the Markets. The Markets have ended in the negative for six consecutive trading sessions. Today as well, the Markets are expected to open on a negative note but today’s opening levels would see the Markets open near its 50-DMA. There are very high chances that post opening lows, we see the Markets bottoming out and improving as the session progresses.

The RSI—Relative Strength Index on the Daily Charts is 42.4101 and it has reached its lowest value in last 14-days which is bearish. However, it does not show any bullish or bearish divergences. The Daily MACD continues to trade below its signal line.

On the derivative front, NIFTY November futures have shed very nominal 32,550 shares or 0.17% in Open Interest. This is a silver lining for the Markets because at these figures we can surely say that the OI has remained virtually unchanged as against heavy shedding that we saw in previous sessions.

Given the pattern analysis, it is pretty sure that the Markets can see a lower opening but that levels would near its 50-DMA.There are bright chances, as mentioned before, that the Markets attempts to find support around these levels and improves as we go ahead in the session. The F&O data also supports this as it does not show any heavy shedding of open interest as well.

All and all, even with negative opening, we see a fair chances that the Markets attempts to find bottom today around the opening levels. It is advised that creating shorts should be strictly avoided as there is still no any structural breach on the charts. Any lower levels, so long as the 50-DMA and its filters are maintained, should be used to make selective purchases. However, purchases should be very less and selective and liquidity should be maintained. Overall, positive outlook is advised for today. 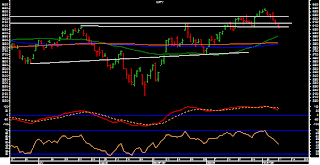 Today’s analysis for the Markets remains more or less on the similar lines like yesterday. Expect the Markets to open on a flat to modestly negative note and  look for directions. The Markets have breached few of its support levels in previous couple of sessions and this might act as resistance on its way up.

The lead indicators continue to remain mildly bearish. The RSI—Relative Strength Index on the Daily Chart is 46.7924 and it has reached its lowest value in last 14-days which is bearish. However, it does not show any bullish or bearish divergences on the Charts. The Daily MACD continues to remain bearish as it trades below its signal line.

the derivative front, NIFTY Futures have continued to shed over 7.48 lakh shares or over 3.68% in open interest. This signifies continuation of unwinding of long positions and profit taking happening in the Markets.

From the above reading, certain points remain very clear and similar like last couple of days. The Markets have breached few of its support levels in last 5 sessions. Further to this, while doing this, it has continued to shed net open interest. The lead indicators too remain mildly weak on the Daily Charts. All of this point towards continuing phase of corrective activities.

Having said this, it is also important to note that now, at lease some fresh longs have been seen in select stocks. We will have to see net addition in open interest while we see fresh longs being created. Until this happens, range bound correction would continue. It is advised to continue the policy of remaining light and keeping exposures under control. Liquidity should be preserved for existing open positions. Continuation of positive caution is advised for today.

MARKET TREND FOR TODAY
The Markets continued to correct on Friday as well as it ended the day at 6140.75  with net loss of 46.50 points or 0.75% after a volatile session with remained largely in a downward trajectory.

Today, expect a negative opening once again and the correction in the Markets is expected to continue, at least in the initial trade. The Markets are expected to open lower and test the support levels of 6100-6110. The intraday trajectory that the Markets forms after opening would be important to decide the trend for today. However, in case of a lower opening, improvement going ahead in the session cannot be ruled out as well.

The lead indicators continue to show likelihood of continuation of corrective activities. The RSI--Relative Strength Index on the Daily Chart is 51.8674 and it has reached its lowest value in last 14-days which is bearish. Also, the RSI has set a new 14-day low whereas NIFTY has not yet and this is Bearish Divergence. The Daily MACD remains bearish as it trades below its signal line.

On the Weekly Charts, the RSI is 57.4086 and it is neutral as it shows no failure swings or any divergences. The Weekly MACD remains bullish as it trades above its signal line.

On the derivative front, NIFTY has continued to shed over 5.04 lakh shares or 2.42% in Open Interest. This clearly shows continuation of correction and shedding of long positions from higher levels.

Given the above readings, it is clear that weakness in the overall broader markets is likely to persist and we might see the Markets testing the support levels of 6100. However, it is also important to note that these are important supports and we may see some improvement in the Markets going ahead in the session as well in case of early weakness. However, we will need to see fresh longs to get build up resulting in addition in Open Interest.

All and all, we would like to point out once again that this is a corrective phase and no structural breach on the Charts is seen. Shorts should be avoided and stock specific out performance would be seen. Moderate positions should be maintained and liquidity preserved. Also, vigilant protection of profits at higher levels is advised. Overall, cautious optimism is advised for today.
Milan Vaishnav,
Consulting Technical Analyst,
www.MyMoneyPlant.co.in
http://milan-vaishnav.blogspot.com
+91-98250-16331
milanvaishnav@mymoneyplant.co.in
milanvaishnav@yahoo.com
Posted by MyMoneyPlant.co.in at 11/11/2013 08:50:00 AM No comments: