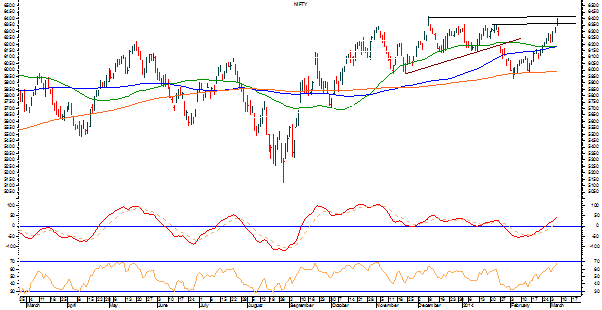 Today would be a very critical session for the Markets. The Markets are slated to open on a decently positive note and this opening will see the Markets going to their all time highs. However, this would also make the Markets very near to the overbought territory and there are fair amount of chances that we encounter consolidation again at higher levels. The intraday trajectory would continue to occupy the centre stage along with volumes.

For today, the Markets will see it trading at its life time highs once it moves past 6415 levels. The supports exists at 6350 and 6310 levels.

The lead indicators continue to remain in place. The RSI—Relative Strength Index on the Daily Chart is 68.9202 and it has reached its highest value in last 14-days which is bullish. The Daily MACD remains bullish as it continues to trade above its signal line. On the Candles, A rising window occurred  (where the top of the previous shadow is below the bottom of the current shadow).  This usually implies a continuation of a bullish trend.

On the derivative front, NIFTY March futures has went on to add over 4.35 lakh shares or 2.83%  in Open Interest. This indicates continuation of fresh buying and creation of fresh longs in yesterday’s session. The NIFTY PCR stands at 1.14 as against 1.03 yesterday.

Going by the pattern analysis, the Markets have moved past its minor double top resistance which was 6350 levels and moved towards the all time intraday high of 6415. Today’s opening would see it trading above the all time high which technical should act as either resistance (in case of lower opening) or support if the Markets opens above that. This makes a ground for the Markets to open higher and consolidate from higher levels again.

All and all, with the positive opening likely, the Markets would see itself trading at its all time highs. Given this, there are fair chances that we see consolidation returning. There are chances that the Markets see some mild profit taking from higher levels as today’s up move would take the Markets very near to its overbought territory. It is advised to very  vigilantly guard profits at higher levels and not to resort to blind buying. Baring some consolidation which is expected at higher levels, the under current continues to remain very much intact. Cautiously positive outlook is advised for today. 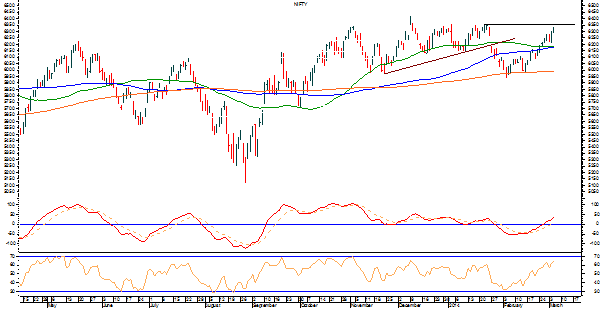 Today, expect the Markets to see yet another positive opening and continue with its up move at least in the initial session. However, as evident from the Chart, the opening is likely around its pattern resistance in form of double top. The intraday trajectory that the Markets form after opening would be critically important and the  behaviour of the Markets vis-à-vis the double top resistance would be equally important.

The RSI—Relative Strength Index on the Daily Chart is 64.6038 and it has reached its highest value in last 14-days which is bullish. It does not show any bullish or bearish divergence. The Daily MACD trades above its signal line and it continues to remain bullish.

On the derivative front, NIFTY March futures have added over 8.34 lakh shares or 5.74% in Open Interest. This shows that the more longs have been yesterday, especially in the second half of the session.

Going by the pattern analysis, as mentioned earlier, the Markets might open near its double top resistance levels and see some consolidation there. If the Markets resists near those levels, then the resistance can come in form of either range bound consolidation or mild profit taking. In any case, the Markets would keep its underlying trend intact.

All and all, the Markets would open on a positive note and at the same time, might consolidate at higher levels as well. Going by this, it is advised to continue to protect profits at higher levels. With the underlying trend remaining intact, shorts should strictly be avoided. Any downside or consolidation period should be utilized in making fresh purchases. With some chances of mild correction / consolidation expected at higher levels, cautious approach is advised for today. 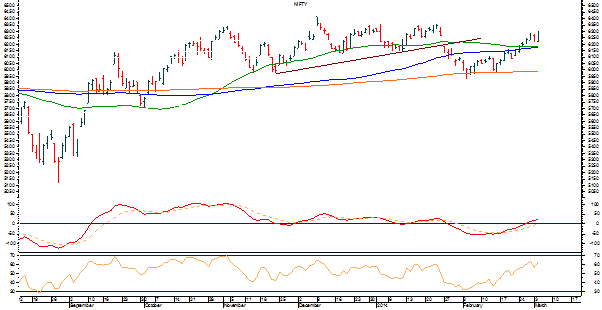 The Markets yesterday have paned out exactly as analysed in our yesterday’s edition of Daily Market Trend Guide. Today as well, expect the Markets to open on a modestly positive note and continue with its up move at least in the initial trade. Primary speaking, the Markets are expected to inch upwards moving towards the levels of 6355 wherein it would encounter a minor Double Top formation.

The RSI—Relative Strength Index on the Daily Chart is 62.5592 and it does not show any failure swings. The Markets have posted its 14-day high but RSI has not yet and this is bearish divergence. The Daily MACD is bullish as it continues to trade above its signal line. On Candles, an engulfing bullish line has occurred. If this pattern occurs during an uptrend, which is the case with NIFTY, it indicates a potential top.

On the derivative front, the NIFTY March futures have added over 10.84 lakhs shares or massive 8.08% in Open Interest.   This robustly suggests that good amount of fresh longs have been created and yesterday’s gains are not just merely on account of short covering.

This time we will have to read lead indicators along with F&O data as well as pattern analysis of the Charts. Going by pattern analysis, the Markets should have no problems going around 6350-6360 levels wherein it is again likely to consolidate. However lead indicators mildly suggest that the Markets may struggle to reach there and pre-pone the consolidation or may see some minor profit taking. Again the F&O data that shows big addition of Open Interest shows that it will resist to any immediate downside in the Markets.

Going by all this, one thing is clear that even if the Markets struggles a bit to move upwards, it is not likely to show any significant downside from there as well. At the most, it may again consolidate a bit around these levels and upwards. Given this reading, it is advised that given a brief likelihood of profit taking from higher levels, the existing profits should be very vigilantly protected now. Also, keeping other indicators in view, shorts should still be strictly avoided. Overall, continuance of positive outlook is advised for today. 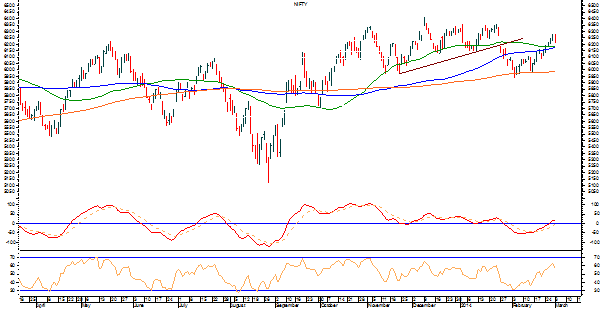 Today, the Markets are likely to open on a modestly positive note and would look for directions. The weakness that we saw yesterday would now see itself getting replaced with some mild recovery in the Markets. While intraday trajectory would continue to remain important, we are likely to see some respite from the weakness that we saw yesterday. The Markets might trade in a range today with the levels of 100 and 50-DMA acting as major supports.

The lead indicators continue to remain in place. The RSI—Relative Strength Index on the Daily Chart is 56.7830 and it is neutral as it shows no bullish or bearish divergences or any failure swings. The Daily MACD continues to remain bullish as it trades above it signal line.

On the derivative front, the NIFTY March futures saw shedding of Open Interest by over 2.52 lakh shares or 1.84%. This signifies some profit taking from higher levels in the second half of the session.

Going by the pattern analysis, the Markets have just corrected after five days of gains. Though it corrected yesterday, it has shown no structural breach on the Charts and it still continues to trade above all of its Daily Moving Averages. Having said this, in event of any weakness, it would be important for the Markets to keep trading above its 50-DMA and 100-DMA at Close levels and these two levels should continue to act as supports. So long as the Markets continue to trade above these levels, any weakness would be just consolidation before continuation of the up move.

All and all, today, we would see a modest opening and the Markets should see minor gains in the opening trade. With no structural breach on the Daily Charts, the shorts should be strictly avoided. Any downside should be utilized in making selective purchases. Overall, though the quantum of the exposure in the Markets should  be controlled,  cautiously positive outlook is advised for today.