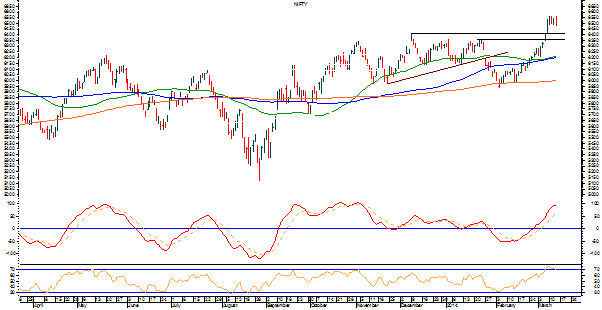 Expect the Markets to open on a modestly positive note again and continue with its corrective activities at least in the initial session. The Markets have been in consolidation period after giving a fabulous rise over previous session and such consolidation is making the Markets healthy in the immediate short term. The intraday trajectory would be important and we might see some improvement in the intraday trend as we go ahead in the session.

The RSI—Relative Strength Index on the Daily Chart is 69.2068 and it is neutral as it shows no bullish or bearish divergence. The Daily MACD remains bullish as it continues to trade above its signal line.

On the derivative front, NIFTY March futures have added over 7.90 lakh shares or 4.24% in Open Interest. This is a very important indicator that the Markets have seen fresh shorts being built up and has seen no major offloading from higher levels.

Going by the pattern analysis, the Markets have been consolidating in a broad trading range after stupendous rise in last couple of sessions. Further to this, the FIIs though they have been selling in the derivative segments and creating fresh shorts in the system, have been reported net buyers in Cash segment.  This very clearly signifies that the Markets are just in corrective mode and the weakness would have a very limited downside given these F&O figures.

All and all, it is advised to remain light on the Markets. The Markets have just consolidating in a broad range and given this phenomenon, it is strongly advised to continue to refrain from shorts as the Markets have not shown any technical breach.  While remaining light on positions and maintaining high vigil over protection of existing profits, any dip should be continued to be used to make fresh purchases. Overall, cautious optimism is advised for today. 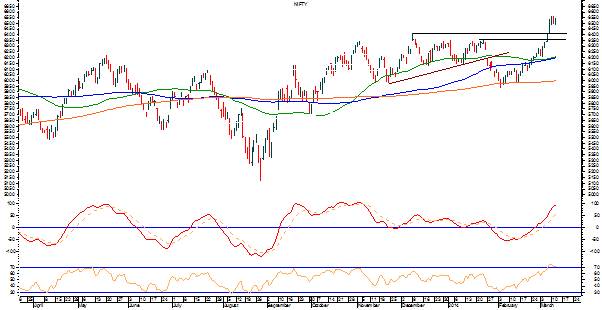 Today, the Markets are expected to open on a modestly positive note and might attempt to move past its previous highs. Even after such stupendous rise, the Markets are showing no signs of weakening and this too stands supported by F&O data. The Markets would at the most consolidate with up ward bias and continue to attempt to gain strength for fresh upside.

The  lead indicators continue to remain in place. The RSI—Relative Strength Index on the Daily Chart is 72.2642 and it continues to trade in the overbought territory. It remains neutral as well as it shows no bullish or bearish divergences or failure swings. The Daily MACD remains bullish as it continues to trade above its signal line.

On the derivative front, NIFTY March futures have added 61,100 shares or 0.33% in Open Interest. This shows that even in this consolidation there has been no offloading observed, in fact, some minor addition of fresh longs is seen.

All and all, the Markets are likely to continue to consolidate and do so with a strong upward bias. In such scenario, it is strongly advised to avoid shorts and use any downsides to make selective purchases. The only thing that the Markets are in overbought zone makes us little cautious otherwise the Markets continue to show very strong under current. However, until a new high is formed, the exposures should be controlled. Overall, positive caution is advised for today.

As we had mentioned in our yesterday’s edition of Daily Market Trend Guide, the Markets have started showing signs of weariness and it consolidated yesterday at higher levels. Today is going to be no different. The Markets are expected to open on a flat or little negative note and look for directions. The Markets are likely to consolidate and continue with its mild corrective activity as it continues to trade in “overbought” territory.

The RSI—Relative Strength Index on the Daily Charts is 72.0231 and it is neutral as it shows no bullish or bearish divergences or any kind of failure swings. But it continues to trade in the overbought territory. The Daily MACD is bullish as it trades above its signal line.

On the derivative front, NIFTY March futures have added over 3.87 lakh shares or 2.13% in open interest. This shows that the underlying strength of the Markets is very strong and there is been no offloading of positions that was seen. In fact some shorts have already started being created in the system.

Going by the pattern analysis, the Markets have formed an immediate top of 6562. For any fresh up move to occur, it will have to move past this level. Until this happens, the Markets would continue to consolidate at higher levels. During this period, we would often see Markets losing ground on lower volumes and trading in a capped range.

All and all, the Markets are likely to continue to consolidate at these levels again. We might see little negative opening but it is advised to refrain from creating any fresh shorts in the Markets. The sector specific performance would continue and this is likely to prevent Markets from having any deep cuts. Range bound trade with some amount of volatility on either side cannot be ruled out. While remaining light on positions, highly stock specific approach is advised for today. 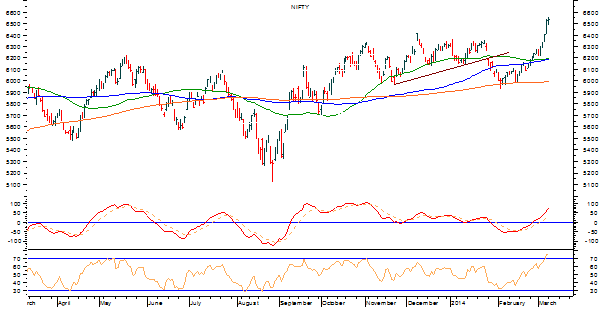 The Markets has showed first signs of weariness at higher levels yesterday though it continued to end the day with modest gains. This tends to happen and Markets tend to remain “overbought” for some time during such up moves. For today, expect the Markets to open on a flat and quiet note and look for directions again. The intraday trajectory that the Markets forms would be critically important today and there are bright chances that the Markets continue with its consolidation at higher levels.

The RSI—Relative Strength Index on the Daily Chart is 75.0965 and it has reached its highest value in last 14-days which is bullish. However, it continues to grossly remain in “overbought” territory. It does not show any bullish or bearish divergence. The Daily MACD continues to remain bullish as it trades above its signal line.

On the derivative front, the NIFTY March futures open interest has remained unchanged as it has just added nearly 60,450 shares or 0.33% in open interest. This shows that there was no major buying seen yesterday, over all on net basis and no major unwinding was seen as well. This implies that there was churning of portfolio seen in the Markets yesterday.

All and all, the Markets are overbought and this certainly warrants some discretion in making fresh purchases. It is continued to be advised, as we have mentioned in our previous edition of Daily Market Trend Guide as well that profits now need to be protected at higher levels. Also, blanked buying should be avoided. It is time to adopt highly stock specific approach and any downsides / consolidation should be used to make fresh purchases. Overall, cautious outlook with controlled exposure is advised for today.