MARKET TREND FOR TODAY
The Markets gave a massive reaction to the deferment of QE tapering and in anticipation of some positive steps by RBI's Credit Policy to be announced  today, ended the day on a massive gains of 216.10 points or 3.66%. For today, expect the Markets to open on a modestly negative note and see some consolidation or some imminent profit taking from higher levels.

The Markets, will get overbought with a positive start and it would extremely unhealthy for the Markets to continue after the kindly of up move it witnessed yesterday. Further to this, the Markets are expected to trade in a capped range in the morning session and would start reacting to the Credit Policy once it is announced after 11 AM.

The RSI--Relative Strength Index on the Daily Chart is 69.05 and it has reached its highest value in last 14-days. The Daily MACD continues to trade comfortably above its signal line.

On the derivative front, NIFTY September futures have added over 5.42 lakh shares or 3.46% in Open Interest and this indicates some longs being created afresh.

All and all, it is advised to refrain from any aggressive participation in the Markets. Any profits on the long positions should be very vigilantly protected. Fresh positions should be taken on extremely selective basis. Overall, some consolidation / minor profit taking is imminent and can be expected any time even if the Markets give knee-jerk reactions to the RBI Announcements.
Milan Vaishnav,
Consulting Technical Analyst,
www.MyMoneyPlant.co.in
http://milan-vaishnav.blogspot.com
+91-98250-16331
milanvaishnav@mymoneyplant.co.in
milanvaishnav@yahoo.com
Posted by MyMoneyPlant.co.in at 9/20/2013 08:41:00 AM No comments: 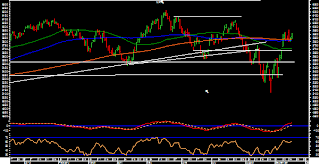 Today’s opening would be squarely guided by the outcome of yesterday’s FOMC Meet. FOMC have decided not to pare with its QE easing from September, but indicated that it would post pone it and  it is expected to be from December. The Markets will have a knee-jerk reaction and is expected to see a gap up opening. However, it should be noted that QE has been postponed and NOT cancelled and any gap up opening is likely to take the Markets near resistance levels and would make it nearly overbought.

However, since gap up opening is expected, the immediate resistance levels would be 6050 and 6075 levels and the support would now exist at 200-DMA which is 5940.21 today.

The lead indicators continue to remain in place. The RSI—Relative Strength Index on the Daily Chart is 61.7973 and it is neutral as it shows no bullish or bearish divergence or any failure swing. The Daily MACD trades above its signal line.

On the derivative front, the NIFTY September futures have shed 3.05 lakh shares or 1.91% in Open Interest and stand along indicators question the sustainability of the opening gains.
Given the above reading, the Markets are set to open on a gap up note, but at the same time, would open near its resistance levels and would be nearly overbought. Further to this, it is be be noted that the FOMC has NOT indicated cancellation of QE3 easing but it has postponed. This is a happening which would not be avoided. It is set to happen, if not now, then later. 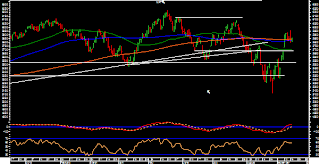 It is important to note that the Markets have managed to keep its head above the levels of 200-DMA which is 5840.12 today. Today, it is likely to open on a flat to mildly positive note and look for directions. The analysis for today remains more or less similar on yesterday’s lines as it would be very crucial for the Markets to keep its head above 200-DMA and therefore, its behaviour vis-à-vis this levels would be very crucial.

The RSI—Relative Strength Index on the Daily Chart is 59.8051 and it does not show any bullish or bearish divergence or failure swings. The Daily MACD remain bullish as it trades above its signal line.

On the derivative front, the NIFTY September futures have went on to shed another 8.44 lakh shares or 5.02% in Open Interest. There has been a steady decline in Open Interest levels since last three session and this clearly indicates that the Markets are set to see one correction coming in.

The indications on the Charts remain very clear. The Markets, with great difficulty have managed to keep its head above the levels of 200-DMA and therefore, even today, the behaviour of the Markets vis-à-vis these levels would remain crucially important. It is also important to note that any dip below the levels of 200-DMA would bring in further weakness in the Markets. Now, if we read the F&O data along with this reading, the steady decline of Open Interest clearly increases the possibility of a imminent correction.

All and all, with this reading, it is advised to refrain from taking aggressive long positions. The outlook remains similar to that of yesterday and it is advised to keep protecting profits wherever possible. Since selective out performance shall always remain, new positions should be taken, but very selectively. Overall, with the possibility of the Markets moving below the levels of 200-DMA, we advice to continue to maintain cautious outlook on the Markets. 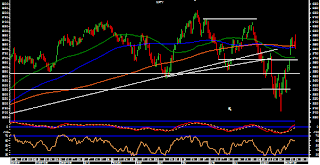 The Markets have taken support at its 200-DMA at Close which is 5839.99 today. Today, it is likely to see a modestly negative opening and therefore, the opening levels of the Markets and its behaviour vis-à-vis the levels of 200-DMA would again remain crucial. The markets will have to remain above its 200-DMA in order to continue with consolidation. Any dip below 200-DMA is likely to bring in more weakness in the Markets.

For today, the levels of 5957 would act as immediate resistance for the Markets. This level has become an immediate top for the Markets and any sustainable up move shall only after the Markets move past this level. Supports come in at 5805 and 5760 levels.

The RSI—Relative Strength Index on the Daily Chart is 59.42 and it is neutral as it shows no bullish or bearish divergence or any failure swings. The Daily MACD remains bullish as it trades above its signal line.

On the derivative front, the NIFTY September futures have shed another 5.05 lakh shares or 2.92% in Open Interest. This clearly suggest that there has been offloading in yesterday’s session and the Markets are more likely to continue with its corrective activities.

Given the pattern analysis and the reading of technical charts, the Markets have taken support at its 200-DMA at Close. In this case, the it becomes necessary for the Markets to remain and trade above this level to avoid any further weakness creeping in. Again, similarly, if the Markets breaches its 200-DMA, it is very much likely that we see some more corrective activity in the Markets. Given the F&O data, the chances of the Markets breaching this levels and seeing more corrective activity are higher given the shedding of the Open Interest that is being reported since last two sessions.

All and all, we continue to sound caution for today as well. Given the above reading, it is advised to refrain from creating any fresh longs any new position should be created on highly selective basis. Profits should be protected at higher levels. Some amount of volatility and sectoral out performance would continue. Overall, it is advised to remain light on positions while maintaining a cautious outlook on the Markets today. 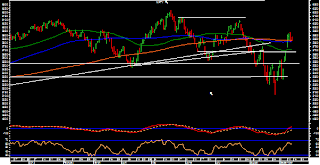 The Markets have shown consolidation in last three trading session after unabated gain of over 600-odd points. While remaining in consolidation phase, the Markets have successfully kept itself above the levels of 200-DMA which is 5839 today. Today’s global cues suggest a strong gap up opening today but it would be crucial to see if it sustains after opening and therefore, the opening levels and the intraday trajectory that the Markets form would be critically important.

The lead indicators continue to remain in place while being neutral. The RSI—Relative Strength Index on the Daily Chart is 59.9756 and it is neutral as it shows no bullish or bearish divergence or any failures wings. The Daily MACD continues to trade bullish, above its signal line. On the Candles, A Spinning Top occurred, which often indicates weariness at higher levels.

On the Weekly charts, RSI is 53.3513 and remains neutral with no divergences or any kind of failure swings. The Weekly MACD remains bearish as it trades below its signal line.
On the derivative front, NIFTY September futures have shed over 16.15 lakh shares or 8.53% in Open Interest. This is a clear indication that offloading has been seen at higher levels.

From what appears from the reading above, even if we see a strong opening following supportive global cues, the sustainability of the same would be very much in question. Given the consolidation and the F&O data inputs, it is very much likely that the Markets opens strong, but struggles maintaining those gains post opening.

All and all, caution still prevails in the air. The global cues and the F&O data throw contradictory signals. As mentioned, even with opening with gains, the Markets need to capitalize on those gains and therefore the intraday trajectory would b e very crucial. It is advised to make aggressive purchases post stronger opening but use the same to protect any existing profits at higher levels. Selective purchases maybe made as sectoral out performance may be seen. It is advised to continue to maintain a cautious outlook on the Markets.