The Markets remained volatile yesterday and after two way swings, it ended the day with modest losses. Today, we can expect a technical rebound and the Markets are likely to see a decently positive opening.  It would be crucially important to see if the Markets are able to capitalize on today's expected positive opening and built up from there making yesterday's lows as its immediate bottom. The levels of 200-DMA would pose as resistance to the upside if things are viewed just technically.

The RSI on the Daily Chart is 31.8065. This shows a bearish divergence while being nearly "oversold". Overall, given these facts, once can expect that the Markets have attempted to find its bottom at least in the immediate short term. As mentioned, the Markets will have to maintain its expected opening gains. Though some amount of bargain buying may be done, it should be kept limited while maintaining positive caution in the Markets.
Milan Vaishnav,
Consulting Technical Analyst,
Af. Member: Market Technicians Association (MTA), USA
Af. Member: Association of Technical Market Analysts, INDIA 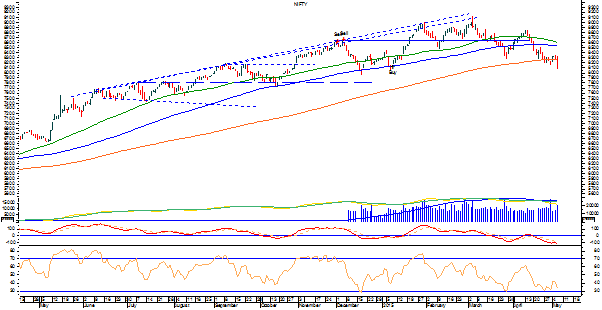 MARKET TREND FOR THURSDAY, MAY 07, 2015
Today, Markets continue to remain on a critical juncture wherein, if we look purely from the technical angle, it shows a high probability of a rebound. However, today, it is expected to open on a quiet note and look for directions. Given the near over-sold nature of the Markets some technical possibilities of a technical rebound remain. However, the Markets are more guided by few big shot selling everyday and during such times, technicals tend to remain by the sidelines. Artificial executions / systemic trades, such as Algo Trades tend to disregard the technicals.
For today, the levels of 8145 and 8210 are likely resistance levels for the Markets. The supports come in at 8050 and 8010 levels.
The RSI—Relative Strength Index on the Daily Chart is 33.0481 and it does not show any failure swing. However, the NIFTY has reached its lowest point in last 14-days whereas RSI has not done so. This is Bullish Divergence. The Daily MACD continues to remain bearish trading below its signal line.
On the derivative front, NIFTY May futures have continued to shed over 3.38 lakh shares or 2.02% in Open Interest.
Coming to pattern analysis, the Markets have once again completely disregarded the presence of something as important as 200-DMA while on its way down. This typically happens when one or two specific factors cause downsides and they very often typically continue to show disregard to even major technical indicators. However, if we anyways attempt to take cues from technicals, the Markets may once again attempt a rebound even if it sees some minor downsides post opening.
Overall, in such circumstances, it would be unwise to take cue only from the technical indicators. When Algo Trades are out to get executed they tend to disregard the technical levels. Given this thing, even if the Markets attempts to rebound, it is advised to continue to refrain from taking any aggressive positions until the directional bias is established. Fresh purchases may be made in good stocks at lower levels as the present conditions provide excellent entry points but this should be kept limited. Continuance of caution is advised for the day. 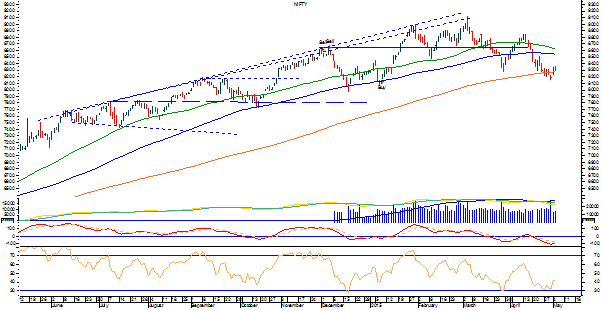 MARKET TREND FOR WEDNESDAY, MAY 06, 2015
Today’s analysis continues to remain more or less on similar lines. Though the Markets have attempted to find its bottom, it does not seem completely out of the woods as yet. Today, we can expect a modestly negative start to the trade and just like yesterday, the levels of 200-DMA would continue to provide crucial guidance to the impending trend for today as well as days to come. The Markets will have to continue to maintain itself above the 200-DMA.
For today, the levels of 8375 and 8430 will act as immediate resistance on the Charts. The supports come in at 8275 and 8230 levels.
The RSI—Relative Strength Index on the Daily Chart is 41.7273 and it remains neutral as it shows no bullish or bearish divergence or failure swing. The Daily MACD remains bearish as it trades below its signal line. However, it is moving towards reporting a positive crossover in coming sessions if the Markets do not see a major downside.
On the derivative front, the NIFTY May futures have further shed over 15.46 lakh shares or over 8.44% in Open Interest. This is little precarious figure as the Markets are seeing some short covering from lower levels but at the same time it is not getting replaced with fresh buying.
Going by the pattern analysis , the Markets have attempted to find its bottom and has no moved past its 200-DMA. As mentioned in our previous edition, this level of 200-DMA is now supposed to provide support to the Markets if it consolidates. It would be very crucial for the Markets to stay above 200-DMA levels in order to prevent any weakness from creeping in. It is likely that the Markets continue to see some amount of consolidation before its attempts to resume its up move.
All and all, also as mentioned earlier, the Markets are not completely out of the woods as yet. The attempt to find a bottom is made but at the same time, the confirmation is still awaited and the Markets may see range bound consolidation with some amount of volatility ingrained in it. The levels of 200-DMA would be crucial to watch out for. It is advised to restrain from creating  any aggressive positions and maintain cautious outlook for the day. 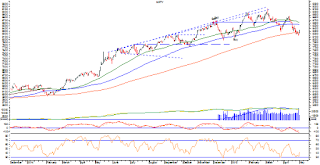 MARKET TREND FOR TUESDAY, MAY 05, 2015
What the Markets have seen yesterday is a heavy short covering led rally and today, we can expect the Markets to maintain yesterday’s gains. We can fairly expect a quiet opening and in the process the Markets are likely to consolidate a bit with the levels of 200-DMA acting as support. The intraday trajectory would be critically important for the Markets to watch out for along with the behaviour vis-à-vis the levels of 200-DMA. The Markets shall consolidate and in the process, it will have to remain above 200-DMA in order to avoid any more weakness to creep in.
The levels of 8365 and 8410 will act as resistance on the upside whereas the levels of 8273 and 8210 are likely supports on the lower side.
The RSI—Relative Strength Index on the Daily Chart is 42.0491 and it is neutral as it shows no bullish or bearish divergence. The Daily MACD remains bearish as it continues to trade below its signal line.
On the derivative front, the NIFTY May futures have shed over 5.85 lakh shares or 3.09% in Open Interest. This clearly signifies that the upsurge in NIFTY has been because of heavy short covering from lower levels.
Coming to pattern analysis, the Markets had been nearly oversold though it traded below its 200-DMA a day before. It has attempted to take support at these levels at Close and has attempted a pullback since then. Since the Markets have now moved past its 200-DMA on the upside, in event of any consolidation, this level of 200-DMA is expected to act as support. The normal thing would be that the Markets would consolidate on its yesterday’s gains and continue with its up move. However, some amount of volatility while doing so cannot be ruled out.
Overall, though the Markets have attempted a pullback, yesterday’s pullback can be more attributed to short covering from lower levels and some bargain hunting. It would be crucially important to see that this gets replaced with fresh buying and the Markets are able to capitalize on its yesterday’s gains. The chances are that the Markets may consolidate a bit with the levels of 200-DMA now acting as support with an overall upward bias. Positive outlook is advised for the day. 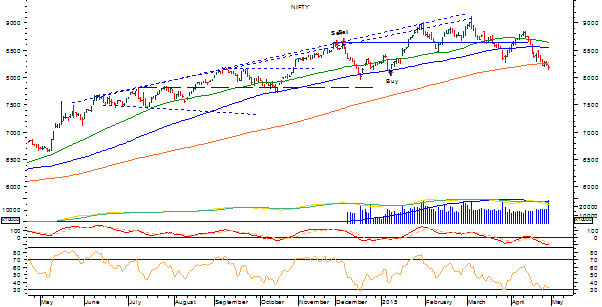 On the derivative front, the NIFTY MAY Futures have added Open Interest. Both the NIFTY and Stocks rollover have been healthy and have remained above its 3-month average.

Coming to pattern analysis, on the Weekly Charts, the Markets have tested its 50-DMA and have attempted to take support there. Usually this is likely to act as support. On the Daily Chart, the Markets have closed below its 200-DMA but has remained within its filter as of now. In case of positive opening, this 200-DMA level is likely to pose resistance to the Markets on its way up.