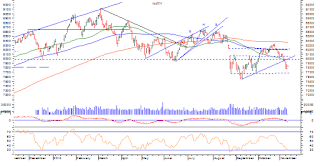 The RSI—Relative Strength Index on the Daily Chart is 33.1378 and it is neutral as it shows no bullish or bearish divergence or any failure swing. The Daily MACD continues to remain bearish as it trades below its signal line.

On the derivative front, the hour-long session on Wednesday, the NIFTY November futures have shed over 1.04 lakh shares or 0.59% in Open Interest. This shows continuation of some offloading and unwinding of positions in the Markets.

Having a look at pattern analysis, the Markets attempted to form some base near the levels of 7775. However, given the structure of the Charts, any continuing weakness will see the Markets testing its support levels of 7680 levels in the immediate short term. Again, it is important to note that the Markets will once again get nearly oversold any downsides at close levels. This will ensure that the Markets see little and limited downsides and does not make any significant breach on the Daily Charts.

Overall, with the lower opening expected, the Markets are once again set to test its immediate support levels. However, taking a combined look at the technical structure of the Market, its lead indicators and the F&O data, the chances remain that post negative opening; it will either attempt to recover as the day progresses or will keep its downsides limited. It is advised to keep exposures limited and maintain liquidity while adopting a cautious outlook on the Markets.


Ahead of the Muhurat Trading session today, the Markets thoroughly disappointed as bearish undertone continued to weigh heavy on the Markets as it ended the fifth day in a row with losses. The Markets saw a negative opening but this negative opening was modest in the beginning as the Markets traded with modest losses in the morning session as it formed its intraday high of 7885.10 in the very early minutes of the trade. Thereafter, the Markets traded with capped losses, more in the sideways trajectory in the first half of the session. In the second half the Markets saw some more weakness creeping in and it got intensified in the last hour of the trade. The last hour saw a sharp paring of gains as the Markets formed its intraday low of 7772.85. It finally settled the day at 7783.35, posting a net loss of 131.85 points or 1.67% while forming a lower top and lower bottom on the Daily Bar Charts. 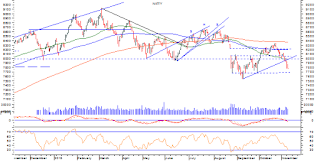 
Markets shall conduct a small “Muhurat” trading session from 17:45 hrs to 18:45 Hrs and such sessions remain typically symbolic in nature. We may expect a flat opening and also see the Markets trading in a subdued and capped range for a one hour long session today. The Markets are now “oversold” and we may see some positive ticks today. However, no major movements are expected in today’s session.


The RSI—Relative Strength Index on the Daily Chart is 28.7980 and it has reached its lowest value in last 14-days which is bearish. It is now trading in “oversold” territory and it also does not show any bullish or bearish divergence. The Daily MACD remains bearish as it continues to trade below its signal line.


On the derivative front, the NIFTY November futures have shed 1.95 lakh shares or 1.09% in Open Interest. Given these figures, it is evident that unwinding of positions continued.


Coming to pattern analysis, the Markets have closed near the lowest point of the day. Given this fact, speaking purely on technical terms, Markets may see some weakness persisting for some more time. At the same time, given the oversold nature of the Markets, some positive ticks cannot be ruled out. Due to fragmented week, with today just being a one-hour session followed by holiday tomorrow, and just one working day before a weekend, the volumes are likely to remain typically lower.


Overall, given this fact, we may see subdued, range bound Market session for today. Volumes are set to be lower and may not see the Markets heading decisively in either direction. Given the oversold nature of the Markets, some technical rebound in near term can be expected. Selective and moderate purchases may be made for today while maintaining a cautious outlook for the Markets. 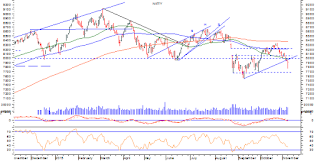 MARKET TREND FOR TUESDAY, NOVEMBER 10, 2015
The Markets today are likely to continue to feel some aftershocks and that would keep the analysis more or less on similar lines that of yesterday. The Markets are likely to open once again on a lower note but not like yesterday. Though a negative opening is expected, it is once again likely that the Markets sees some recovery or stability going ahead in the session given the overall structure on the technical charts as well as some F&O data. However, some choppiness is likely to remain ingrained in the Markets and volumes will tend to remain on lower side as well.

The RSI—Relative Strength Index on the Daily Chart is 35.5881 and it has reached its lowest value in last 14-days which is bearish. It does not show any bullish or bearish divergence. The Daily MACD continues to remain bearish as it trades below its signal line.

On the derivative front, the NIFTY November futures have shed over7.39 lakh shares or 3.96% in Open Interest. This very clearly indicates that shorts were covered on a large scale pose gap down opening yesterday. The NIFTY PCR stands lowest in recent times at 0.77 as against 0.83 yesterday.

Coming to pattern analysis, the Markets have made a severe and sharp breach of the pattern support in the form of rising trend line as evident from the Daily Chart. This level, on its way up, will continue to act as a short term resistance. Today, though some lower opening is expected, it continues to pose some chances just like yesterday for the Markets to recover as it goes ahead in the session. The F&O data suggests massive short covering yesterday and it suggests somewhat clear discomfort of the shorts at lower levels in the Markets. Even if the Markets sees fresh shorts getting built up and sees some downward pressure, such downsides seem to be limited as such.

Overall, the Markets may see somewhat lower opening today as well but it is advised to now refrain from creating any fresh shorts. Given the overall structure and the F&O data, the downsides seem limited and any dips should be continued to be used for making quality and selective purchases. However, in the same breadth, such exposures should be kept at very moderate levels and high vigil over profits at higher levels should be maintained. 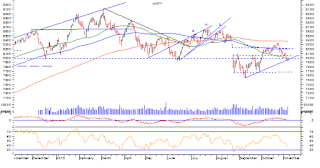 MARKET TREND FOR MONDAY, NOVEMBER 09, 2015
Markets will have a sentimental drawdown to Bihar Results and are expected to open on a gap down note, probably near its support zone of 7800-7850 levels. However, the Markets have already corrected nearly 400-odd points from 8350 to 7950 levels and therefore we can expect that there can be some amount of recovery post opening, especially in the second half. The reason of this hope of recovery in the later part is that the Markets had already expected and digested such outcome to some extent.

The RSI—Relative Strength Index on the Daily Chart is 38.0591 and it has reached its lowest value in last 14-days which is bearish. It does not show any bullish or bearish divergence or any failure swings. The Daily MACD remains bearish as it continues to trade below its signal line. On the Weekly Charts, the Weekly RSI is 43.7442 and it remains neutral as it shows no bullish or bearish divergence or any failure swing. The Weekly MACD has reported a negative crossover and it now trades below its signal line.

On the derivative front, the NIFTY November Futures have shed over 4.01 lakh shares or 2.10% in Open Interest. There are very clear indications that good amount of short positions exist in the Markets. The NIFTY PCR stands at 0.83 as against 0.86 levels on Friday.

Coming to pattern analysis, the today’s gap down opening will cause the Markets to breach one more of its pattern support levels, this time in the form of a rising trend line. However, it is important to note that the Markets have already seen the decline of over 400-odd points over last fortnight and today’s opening is most likely to see the shorts positions being covered from lower levels. The short covering and recovery from lower level is likely but the timing of the same remains highly uncertain. However, probability remains that the Markets show resilience post lower opening and some short covering may lead the Markets to recover in the later part of the day.

Given this picture and analysis, the Markets do have some amount of hopes of recovering in the later part of the day. However, the undertone has certainly turned bearish following the Bihar outcome and also the probability of still impending rate hike from the Fed. Overall, even if there are chances that the initial dip may be bought into, we continue to advise to remain clear of the Markets and avoid any significant exposure at buying. Limited purchases at lower levels with great degree of caution is advised for today.