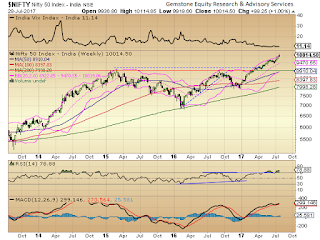 Though the week that has gone by has remained extremely volatile, the benchmark NIFTY50 has managed to end the week with net gains of 99.25 points or 1% on a weekly note. The coming Week will, by all means, remain exiting. The Markets have demonstrated extremely buoyant intent and at the same time has now become extremely overbought. The coming week will see the Markets continue to attempt to mark fresh highs but at the same time, we will see good amount of volatility also creeping in to the Markets. Despite buoyant intent, the participants will have to remain ready to face volatile profit taking bouts as well from higher levels.

The Relative Strength Index – RSI on the Weekly Chart stand at 78.8795 and they have marked a fresh 14-period high which is bullish. However, it trades in extremely overbought range. The Weekly MACD continues to stay bullish while comfortably trading above its signal line. No significant formations are observed on Weekly Candles.

Overall, there is no doubt that the inherent buoyancy in the Markets will remain intact. In the same breath, we cannot ignore the overbought nature of the Markets. It is further nearly certain that we will see high volatility in coming week and we will also continue to remain exposed to volatile profit taking bouts from each higher level the Markets scales. In the given circumstances, while shorts may be very strictly avoided, Markets participants will have to keep trailing protective stop loss levels to chase the momentum in a protected manner. 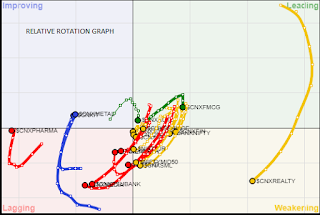 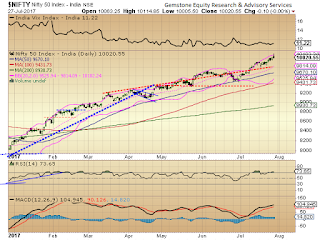 The benchmark NIFTY50 ended unchanged with losing just 0.10 points at Close levels, it came off over 110-odd points from the high point of the day. This behavior of the Markets holds significance. Though the expiry on Thursday did not remain as volatile as expected but the high point of the day of 10114 is now likely to act as immediate top for the Markets. Our expectation of profit taking coming in has turned into fact. For Friday, and for next couple of days to come, the levels of 10114 has now become an immediate top for the Markets.

The Relative Strength Index – RSI on the Daily Chart 73.6489 and it continues to show Bearish Divergence against the price. The Daily MACD still remains bearish while trading above its signal line. No significant formations are observed on Candles.

Overall, we had mentioned in our previous note that any up move is all likely to be met with profit taking bouts. On Friday, and for coming couple of days, we see this continuing to happen. The overbought nature of the markets coupled with evident fatigue on the lead indicators is likely to force the Markets for some time into consolidation. We reiterate that purchases should be kept very limited and all up moves should be utilized to protect profits on existing positions. 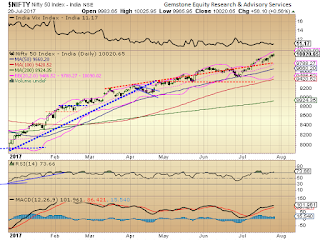 Buoyant behavior of the Indian Equity Markets continued on Wednesday as well as the benchmark NIFTY50 went on to scale and close at record 5-figure mark of 10,020.65 posting gains of 56.10 points or 0.56%. Markets have continued it stellar performance and at the same time have got quite overbought as well. On Thursday, we expect a modestly positive start and expect a minor up tick as well. We also enter the expiry day of the current derivative series and expect volatility to persist and also expect the Markets to encounter bouts at higher levels.

The Relative Strength Index – RSI on the Daily Chart is 73.6635. It has shown a Bearish Divergence as the NIFTY scaled a fresh 14-period high while the RSI did not. Also, RSI remains in overbought territory. The Daily MACD stays bullish while trading above its signal line.

There are all chances that the Markets may continue to out-perform and post some upticks on Thursday as well. However, we cannot ignore the fact that the lead indicators remain overbought and they show bearish divergence against the price. We also need to keep in mind that being the expiry day of the current derivative series; volatility may very much remain ingrained in the session. We recommend extremely caution for short term participants at this juncture and advise to approach Markets with high degree of caution. 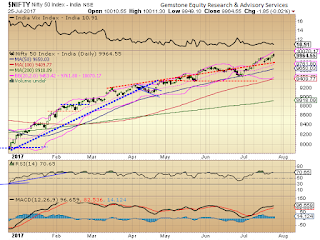 We had categorically mentioned that testing the psychological mark of 10,000 can induce correction in the Markets. Keeping in line with this analysis, the Markets did touch this mark but soon pared nearly 60-odd points from the high levels of the day and ended the day flat with negligible loss of 1.85 points or 0.02%. As mentioned in our yesterday’s note, we do not expect a significant move beyond 10,000 mark too soon. We expect a quiet start tomorrow and also expect a ranged consolidation to continue. Being the penultimate day of the expiry,  we also expect rollovers induced volatility to persist.

The Relative Strength Index – RSI on the Daily Chart is 70.6492. Though it remains neutral showing no divergences, RSI remains modestly overbought. The Daily MACD stays bullish while trading above its signal line.

Pattern analysis show that though the Markets continue to trade comfortably above the rising trend line, some amount of consolidation or range bound correction cannot be ruled out with this trend line acting as strong short term support.

Overall, the Bollinger bands remain nearly 49% wider-than-normal. This is most likely to prevent any significant upside and may force the NIFTY to remain in a range. Further rollovers too are likely to induce some volatility in the trade. With the lead indicators modestly overbought, we continue to reiterate a cautious view on the Markets for the day.

MARKET OUTLOOK FOR TUESDAY, JULY 25, 2017
Markets witnessed a sustained up move on Monday as the benchmark NIFTY50 scaled fresh highs and ended with decent gains of 51.15 points or 0.52%. The Markets have ended within a kissing distance of the 10,000-mark. We expect a positive opening tomorrow but it is beyond doubts that the Markets are heading towards a imminent corrective action. We do not see any significant retracement from current levels but we certainly expect some amount of profit taking coming in around 10,000 mark even if it remains short lived. 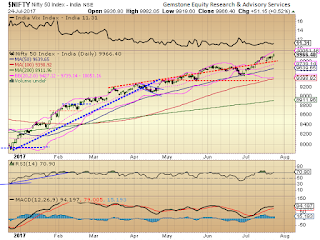 The Relative Strength Index – RSI on the Daily Chart is 70.8978 and now trades in overbought zone. The NIFTY has set a fresh 14-period high while the RSI has not and this has resulted into Bearish Divergence on the Charts. The Daily MACD stays bullish while trading above its signal line.

Overall, the levels that the NIFTY currently trades at are very near to 10,000 mark. It may not be any surprise if the Markets tests those levels but moving past those levels will not be a cake-walk for the Markets. Given the F&O data, the present structure of the Charts and further given the overbought nature of the lead indicators coupled with a bearish divergence, some profit taking bouts cannot be ruled out. We reiterate extremely caution to the short term traders and recommend not getting carried away with the up move and continue to vigilantly protect positions at higher levels. 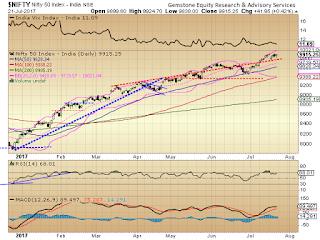 The Markets on Friday saw a remarkable recovery from the lows of the day and ended at a fresh high point as benchmark NIFTY50 posted gains of 41.95 points or 0.42%. On Monday, we once again expect a quiet start to the Markets. On the Charts, the Markets still continue to throw enough signals that some imminent corrective action, even if it is in form of a range bound consolidation is expected. Given the structure of the Markets on Weekly Charts, every up move now has to  be approached with a high sense of caution.

The Relative Strength Index – RSI on the Daily Chart is 68.0091 and it remains neutral showing no divergence against the price. The Daily MACD stays bullish while it trades above its signal line. On Candles, a long lower shadow occurred. This has occurred near the high levels and warrants a caution as it can potentially halt this current up move.

The pattern analysis show that the Markets are trading well above the trend line drawn from 9200 levels and in event of any consolidation or minor corrective move, we can expect this to act as support.

All and all, it would be difficult for the NIFTY to see any unabated up move without any consolidation. As a result of this, we will continue to see volatility remaining ingrained in the markets. Also, the Bollinger bands which are 46.83% wider-than-normal may prevent any sustainable runaway rise. We recommend approaching the Markets with a very cautious view and protect exposures at higher levels.