MARKET TREND FOR TODAY
The Markets saw correction on expected lines yesterday and ended the day with modest losses. For today, expect a moderately positive opening in the Markets and the Markets are expected to trade in a range at least in the opening trade. We may continue to see the Markets in corrective / consolidation mode and thus, the intraday trajectory that it forms post opening would be crucial to dictate the trend for today. The initial positive trade wold  be due to the positive sentiment on Government not relenting for roll backs after the nation wide protests yesterday.

The lead indicators point towards possibility of weakness creeping in. The RSI--Relative Strength Index on the Daily Chart is 67.55 and this has given a "sell" signal on the Charts as it has move below 70 after being in "Overbought" territory. It remains neutral with no bullish / bearish divergence and also it does not show any failure swings. The Daily MACD still continues to trade above its signal line.

The NIFTY and Stock Futures have added moderate open interest and the NIFTY PCR stands at 1.16.

It is important to note that the Government's tough stands on reforms has certainly sent good signals and has helped the sentiments. Further, its not relenting to yesterday's nationwide protest and to other threats from its political allies has also made Government's intentions very clear. HOWEVER, having said this, that if we refer to technical structure of the Markets, it is very much likely that it remains in consolidation / mildly corrective mode for some more time to come. Even on the upside a still resistance is seen at 5630 levels.

All and all, the Markets may see range bound trade and also sharp movements on either side cannot be ruled out. Intermittent profit taking bouts can also be expected and volatility may refuse to go. With no directional trigger on either side, the Markets may see some mild correction or at least consolidation wherein we may see sectoral out performance. While avoiding aggressive position, selective purchases may be made while vigilantly protecting profits on either side. Overall, continuance of cautious outlook is advised for today.
Milan Vaishnav,
Consulting Technical Analyst,
www.MyMoneyPlant.co.in
http://milan-vaishnav.blogspot.com
+91-98250-16331
milanvaishnav@mymoneyplant.co.in
milanvaishnav@yahoo.com

MARKET TREND FOR TODAYExpect the Markets to open on a flat to mildly positive today and also expect the  Markets to continue to consolidate or mildly correct. The Markets have already shown signs of consolidation on Tuesday as it has formed a lower top. In this case, the levels of 5630 has now become  the immediate resistance levels in form of a major double top.

For today, the levels of 5630 and 5650 shall act as resistance. There will be no runaway up move in the Markets until the Markets moves pas these levels.

The lead indicators too  continue to remain overstretched. The RSI--Relative Strength Index on the Daily Chart is 74.37 and though it is neutral it is trading in OVERBOUGHT territory. The Daily MACD too continue to trades above its signal line and is almost oversold.

Having said this, the impending political uncertainty that has come up due to withdrawal of support by TMC at the centre may also  cause some mildly corrective reactions in the Markets. Though this was much expected, the reasons for corrective behavior of the Markets would be more technical. HOWEVER, this holds when there are no rollbacks. If the Government relents to the pressure and induces any roll backs of the announcements made, it would be taken in extremely bad and negative taste by the Markets and international community as a whole.

As of today, range bound corrective movements would be seen, and intermittent profit taking bouts can also be expected. It is advised to avoid aggressive buying and continue to protect profits vigilantly. Any longs or shorts should be taken very selectively. Cautious outlook is advised for today.
Milan Vaishnav,
Consulting Technical Analyst,
www.MyMoneyPlant.co.in
http://milan-vaishnav.blogspot.com
+91-98250-16331
milanvaishnav@mymoneyplant.co.in
milanvaishnav@yahoo.com
Posted by MyMoneyPlant.co.in at 9/20/2012 08:41:00 AM No comments:

Today, expect the Markets to open on a moderately positive note and look for directions. After resisting to the levels of 5630 which are now a major resistance in form of a Double Top, the Markets are likely to continue to resist to these levels. The intraday trajectory, therefore, shall be important for today to determine the trend. The Markets are expected to take some breather today after 10 days of rise and are expected to either consolidate or mildly correct.

For today, the levels of 5630 and 5650 shall continue to act as major resistance.

The lead indicators point towards some weariness in the Markets. The RSI--Relative Strength Index on  the Daily Chart is 75.9195 and though it has reached its highest value in last 14-days which is bullish, it also continues to remain heavily in OVERBOUGHT zone. The Daily MACD continue to trade above its signal line.

Having said this, it is important to note that while continuing to react positively to the unleashed reforms, the CRR cut by the RBI has remained more or less a non event after a mild intraday reaction.  This points towards weariness creeping in the Markets. Further it should also be note that though NIFTY and some Stock futures have continued to add open interest, such rise, however supported by expected change in fundamentals, can get unhealthy if it rises in this manner with OVERBOUGHT technicals. It would be healthy for  the Markets to either see a mild correction or at least consolidate so that it can capitalize on this smart rise of last couple of days and also make it sustainable and healthy.

Therefore, some range bound movement in form of  consolidation cannot be ruled out. Some intermittent bouts of profit taking may also be seen. It is advised that instead of buying aggressively now with rising markets, profits should be protected at higher levels while selective buying can still be done. Overall, neutral to positive outlook with some caution is advised for today. 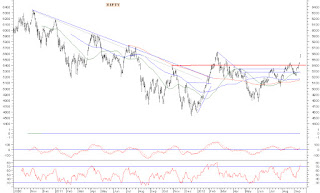 Markets may see positive and strong opening again today. On Friday, the Markets reacted strongly and positively to the QE Easing and hike in Diesel prices. Today, stage is set for yet another positive and strong opening as a reaction to reforms unleashed further by the Government in form of approvals for disinvestments, and approval of FDI in retail and hike of FDI limits in aviation and broadcasting sectors.

The levels of 5630 are immediate resistance for today in form of a major Double Top.

Having said this, there are some important factors too to be kept in mind. There is NO DOUBT that the Government has successfully unleashed reforms and this is what exactly that was required to remove policy paralysis at the Centre. Now it remains to be seen that such proactive measures by the Government are not rolled back in coming days.

Further to this, it is also to be noted that the Markets are now in OVERBOUGHT zone. Today’s positive opening would see the Markets rising over 400-points in straight nine sessions. Also, this would take it further deep into OVERBOUGHT territory.

In such circumstances, the Markets may continue to inch up but at the same time, it is getting dangerous for retail investors at these levels. No doubt, strength will remain in the Markets but the sectoral out performance may be seen. At the same time, investors may also see some intermittent bouts of profit taking seen which can be equally sharp and the levels of 5360 would act as major resistance in the Markets.

All and all, good opening is certain in the Markets today, but at the same time, consolidation and some bouts of profit taking may not be ruled out. There are chances that after the opening gains, the Markets may see little profit taking, if not today, then tomorrow. It is strongly advised to the retail investors that aggressive blind purchases may be avoided and fresh purchases may be done selectively. Though with a tinge of caution, positive outlook is advised for today.