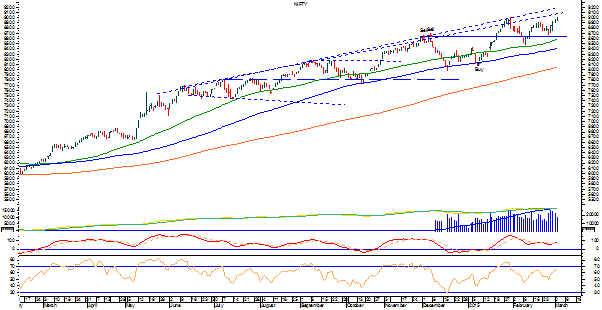 MARKET TREND FOR WEDNESDAY, MARCH 04, 2015
The Markets are expected to take a breather after touching fresh lifetime highs and psychologically important 9000-mark and are expected to consolidate once again. We can expect a quiet to mildly negative opening; however, some amount of volatility and intermittent bouts on either side cannot be ruled out. The Markets continues to remain within its upward channel.

The RSI—Relative Strength Index on the Daily Chart is 65.6048 and it has reached its highest value in last 14-days which is Bullish. It does not show any bullish or bearish divergence. The Daily MACD remains bullish trading above its signal line.

On the derivative front, NIFTY March futures have added another over 12.30 lakh shares or 4.63% in Open Interest. This signifies continuation of creation of fresh longs in the system which is a positive indicator for the immediate short term showing the current trend intact.

Coming to pattern analysis, as we have often mentioned in our previous editions of Daily Market Trend Guide, the Markets may continue to post fresh lifetime highs but at the same time, it will NOT see any break out unless it very significantly breaches the current rising trend line. This would keep the Markets prone to consolidation and profit taking bouts at higher levels.

All and all, we continue to keep the analysis for today on similar lines. With the Markets continuing to remain within the upward channel below the rising trend line, it is yet to achieve a fresh break out. Given this fact that it is vulnerable to profit taking bouts from higher levels, fresh positions should be kept very curtailed and selective while emphasising more on protection of profits at higher levels. 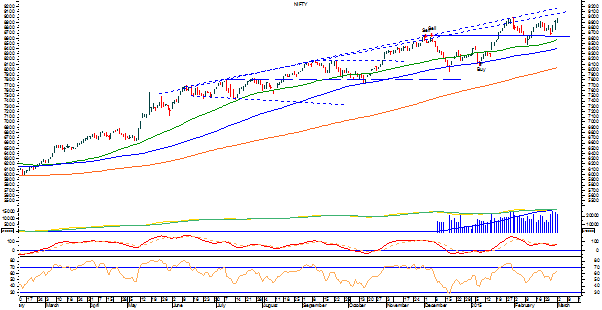 MARKET TREND FOR TUESDAY, MARCH 03, 2015
The Markets are expected to open on a quiet note and faces two-fold possibility today. There are chances that they may attempt to continue its up move and move towards the psychological mark of 9000 and at the same time they continue to remain vulnerable to good amount of volatility and profit taking from higher levels. The Markets now enter a crucial stage wherein they would attempt to touch their life time highs and at the same time might also resort to profit taking as well.

The RSI—Relative Strength Index on the Daily Chart is 63.8821 and it does not show any failure swing. However, NIFTY has continued to post fresh 14-period high but RSI has not yet and this is Bearish Divergence. The Daily MACD has now reported a positive crossover and it is now bullish trading above its signal line.

On the derivative front, the NIFTY March futures have added over 8.73 lakh shares or 3.40% in Open Interest. This is positive indicator signifying the continuation of creation of fresh longs in the system.

While having a look at pattern analysis, the Markets have continued to move towards its life time highs and it is likely that it would continue to do so today as well. There are chances that the Markets attempts to continue with its up move but at the same time, as we had mentioned in our yesterday’s edition of Daily Market Trend Guide, it would be still far from what is known as a “break out” because of ever-rising upper trend line. Therefore, even if it moves towards its highs, it would continue to remain prone to high volatility and profit taking from higher levels.

Overall, it is advised to continue to remain heavily cautious while making fresh purchases. The Markets still has some steam left to not only move towards its life time highs but post fresh lifetime highs as well. However given the technical structure and given the lead indicators, it is advised to continue to keep over all exposure at moderate levels and keeping fresh purchases highly selective. 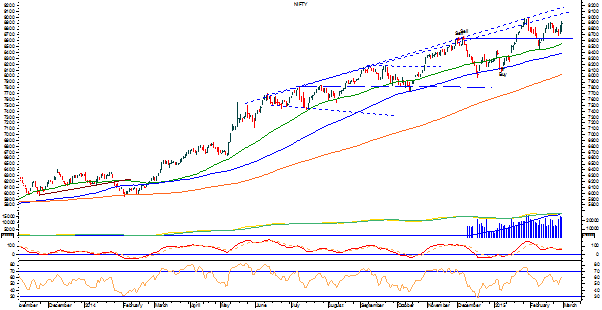 MARKET TREND FOR MONDAY, MARCH 02, 2015
The Markets shall open today after a greatly violent and volatile session on Saturday while reacting to Budget proposals. However, today, we are again likely to see a gap up opening and the Markets are expected to open on a decently positive note. However, at the same time, it is important to note that even if the Markets opens on a strong and positive note, it is likely that the Markets remains within a rising trend line as evident on the Daily Chart. Therefore, the intraday trajectory that the Markets form post opening would be crucial.

The RSI—Relative Strength Index on the Daily Chart is 61.3861 and it shows no failure swing. However, the NIFTY has formed a fresh 14-day high while the RSI has not and this is Bearish Divergence. The Daily MACD still continues to remain bearish trading below its signal line. On the Weekly Charts, Weekly RSI is 68.5577 and shows no failure swing. However, NIFTY has formed a fresh 14-week high but RSI has not and this shows Bearish Divergence as well. The Weekly MACD continues to trade above its signal line and is therefore bullish.

On the derivative front, NIFTY March futures have added over 15.17 lakh shares or 6.27% in Open Interest. This very clearly shows that fresh buying has been done and the rise that occurred in the second half of the session was not merely due to short covering.

Coming to pattern analysis now, it is very important to take note of few important things.
Even if the Markets see a gap up opening and touches the psychological mark of 9000; or while doing so, posts a fresh life time highs, it will NOT be giving any fresh breakouts. It is very much likely that it continues to remain within the upper rising trend line. Though it may continue to remain in overall rising trajectory, fresh lifetime highs should not be taken as fresh breakouts. Therefore, again, in such case, consolidation from higher levels cannot be ruled out.

Overall, keeping in view the overall structure of the Charts, the Markets may open positive and continue with its up move but since it would be far from achieving a break out, it would walk towards its pattern resistance of upper rising trend line. Given this fact, it is advised to use all the up moves that occur to reduce positions or book and protect profits on existing positions while taking fresh exposures very selectively.