Today, again, expect the Markets to open on a mildly positive note and look for directions. The analysis for today remains more or less on yesterday’s lines. The Markets have attempted a breakout and have managed to keep its head above the 7700-level. In order to confirm the breakout and continue with the up move, the Markets will need to trade above 7700 levels. Any drift below this level will bring some consolidation in the Markets again.

The RSI—Relative Strength Index on the Daily Chart is 67.1275 and it is neutral as it shows no bullish or bearish divergence or any failure swings. The Daily MACD continues to remain bearish as it trades below its signal line.

On the derivative front, the NIFTY July futures have shed over 1.65 lakh shares or 1.14% in Open Interest. This certainly translates into unwinding of some positions again from the yesterday’s high levels.

Going by the pattern analysis, the Markets have ended near the low point of the day even if it kept its head above the critical 7700 levels. As mentioned earlier, it will have to trade above 7700 levels in order to prevent any weakness creeping in. Further to this, it would be necessary for the Markets to trade above 7700 levels in order to confirm the breakout. The volumes and the behaviour of the Markets vis-a-vis the levels of 7700 would therefore remain critically important.

Overall, we continue with the strategy of remaining moderately leveraged in the Markets. Fresh purchases should be kept limited to defensives and profits should be vigilantly protected. While maintaining adequate liquidity, continuance of cautious approach is advised in the Markets today.

The Markets will have to maintain levels above of 7700 for today in order to confirm the breakout. The RSI--Relative Strength Index on the Daily Chart is 68.1575 and it does show any failure swing. However, the NIFTY has made a new 14-period high while RSI has not yet and this is Bearish Divergence.

Given the above reading, it is likely that the Markets continues with its momentum and extends its yesterday's gains but in case if the Markets drifts below 7700, which is also likely, may bring us back into consolidation. It is continued to be advised to remain moderate on exposures and stick to defensive stocks while making fresh purchases, that too on extremely selective basis and protecting profits at higher levels.
Milan Vaishnav,
Consulting Technical Analyst,
www.MyMoneyPlant.co.in
http://milan-vaishnav.blogspot.com
+91-98250-16331
milanvaishnav@mymoneyplant.co.in
milanvaishnav@yahoo.com
Posted by MyMoneyPlant.co.in at 7/03/2014 08:55:00 AM No comments: 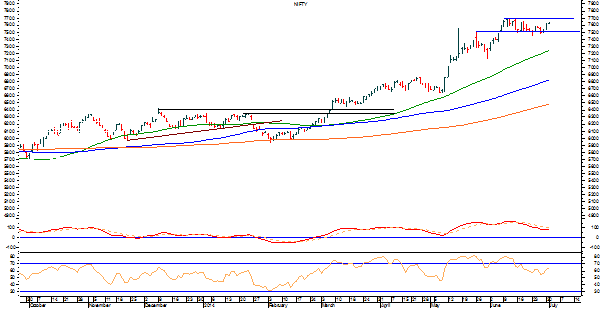 Today would be a crucial session for the Markets. The Markets are slated to open on a decently positive note and look for directions. If the Markets open positive as expected, it would open near its all time high immediate top of 7700 levels and its behaviour vis-à-vis the levels of 7700 would be crucial. The Markets might attempt to move past those levels but at the same time the correction setting in after a positive opening near the resistance levels too cannot be ruled out as the indicators throw contradictory readings.

The levels of 7700 would act as immediate resistance level for the Markets. The supports come in much lower at 7575 and 7510 levels.

The  RSI—Relative Strength Index on the Daily Chart is 63.6290 and it is neutral as it shows no bullish or bearish divergence or any kind of failure swings. The Daily MACD still continues to remain bearish as it trades below its signal line.

On the derivative front, NIFTY July futures have shed over 3.71 lakh shares or 2.65% in open interest. This clearly signifies that selling / offloading in futures have been seen in yesterday’s session.

Going by the pattern analysis, it is clearly evident on the Daily Chart that the Markets have spent last couple of sessions in broad trading range of 200-odd points with the levels of 7500-7510 acting as bottom and the levels of 7700 which have become immediate top for the Markets. The Markets may open positive today but are likely to find resistance near the upper band of the Markets.

Overall, going by the F&O data inputs and the structure of the Daily Chart, the Markets will open higher today but there would be equal amount of chance that some correction or some mild spate of profit taking creeps in from higher levels. It is advised to stick vehemently to defensives and avoid high beta stocks while making purchases and continue to protect profits at higher levels. Moderate exposures and caution are advised or today. 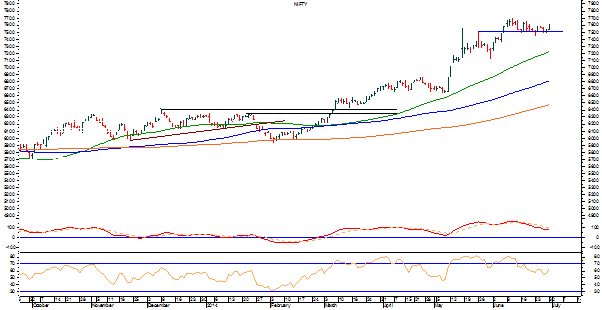 The lead indicators paint a neutral to mildly bearish picture on the Daily Charts. The RSI—Relative Strength Index on the Daily Chart is 62.3454 and it does not show any bullish or bearish divergence or any kind of failure swing and is therefore neutral. The Daily MACD continues to remain bearish as it trades below its signal line.

On the derivative front, the NIFTY July futures have shed a nominal 78,150 shares or 0.56% in Open Interest. This is little interesting as with such a rally yesterday, there has been no addition of long positions at all on one hand and also no significant shedding / unwinding of positions on the other hand as very nominal decrease of Open Interest is observed.

Going by the pattern analysis, one thing remains clear that though the Markets have managed to keep its head above the short term support of 7500-7510 levels, it is unlikely to give a further breakout on the Daily Charts. The reason behind this is the lead indicators paint a neutral to mildly bearish picture on the Daily Charts and the Weekly lead indicators clearly remain “overbought” on the Weekly Charts. This may cause the Markets to remain in a broad trading range for some more time.

Given the above reading, we would continue to advice on the similar lines that we have been advising since couple of sessions. Overall exposures in the Markets should be curtailed and over leverage should be avoided. Any purchases to be made should be done extremely selectively and should be very stock specific an defensive. Overall, continuance of cautious approach is advised for today. 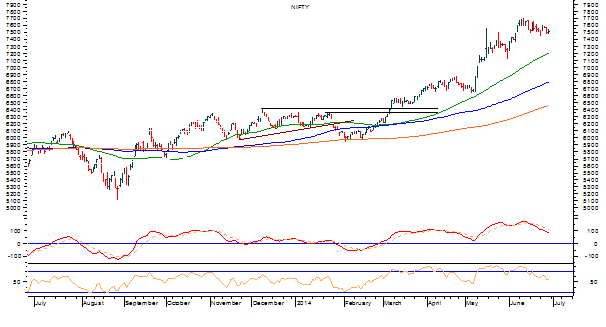 The RSI—Relative Strength Index on the Daily Chart is 56.0144 and it is neutral as it shows no bullish or bearish divergence or any failure swings. The Daily MACD remains bearish as it trades below its signal line. On the Weekly Charts, RSI is 74.3818 and it is neutral without showing any bullish or bearish divergences. However, on the Weekly Charts, it continues to trade in “overbought” territory. The Weekly MACD is bullish but in trades in “overbought” range as well.

On the derivative note, the NIFTY July futures have shed over 1.65 lakh shares  or 1.17% in Open Interest. This indicates some offloading in Friday’s session as well.

Going by the pattern analysis, it is clear that the Markets are struggling to keep its head above its crucial support levels of 7500-7510 levels. Further to this, if we go by the F&O data it clearly points towards consistent shedding of OI , if not at once than gradually. Further, going by the lead indicators, the Weekly Indicators are absolutely in “overbought” territory. This clearly suggests that the Markets will continue to consolidate with clear bias towards some more weakness creeping in.

Overall, with reference to the above reading, it may happen again that we see a positive opening in the Markets but as we go ahead in the session, we may again see the Markets consolidating with negative bias. With the chances of the Markets paring gains in the later part of the day, we continue to reiterate the policy of keeping exposures limited to defensives and keeping them at moderate levels as well. Overall, continuance of cautious approach is advised for today as well.