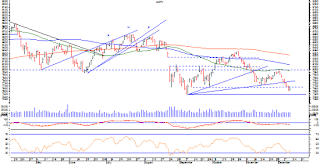 MARKET TREND FOR FRIDAY, DECEMBER 11, 2015
Despite seeing a technical pullback, the Markets have continued to resist to the pattern support of 7680-7700 range that it breached on the downside. Today, we can expect a quiet and flat opening in the Markets but these levels will continue to dictate the trend of the Markets in the immediate short term.  Today’s opening and the behavior of the Markets will be critical as these levels will continue to pose resistance in the immediate short term.

The RSI—Relative Strength Index on the Daily Chart is 36.5019 and it remains neutral as it shows no bullish or bearish divergence or any failure swings. The Daily MACD stays bearish as it continues to trade below its signal line.

On the derivative front, the NFITY December futures have shed over 6.92 lakh shares or 3.54% in Open Interest. This indicates that yesterday’s rally / pullback had to do with heavy short covering. The NIFTY PCR stands at 0.79 as against 0.78.

While having a look at the pattern analysis, the Markets have breached its triple bottom support of 7680 levels. Yesterday, it did see a pullback from the lower side due to it being oversold but quite on expected lines, it resisted to the 7680-7700 levels while pulling up. These levels and few points above will continue to pose resistance to the Markets while pulling back. There are chances that the Markets once again sees a ranged movement before it either attempts to continue with its pullback or see retracements again. The inherent structure of the Markets is weak and there are chances that it tests its lows again in coming session until a significant trigger sees it moving upwards.

Overall, we continue to reiterate to refrain from creating any aggressive long positions. Shorts to should be curtailed as the Markets are now likely to see a ranged movement before it resumes any clear directional call. Any profits on either side should be very vigilantly protected and overall exposures should be kept very limited and curtailed while having a very cautious outlook on the Markets. 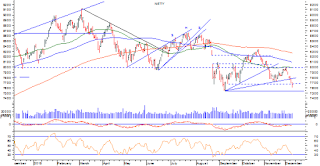 MARKET TREND FOR THURSDAY, DECEMBER 10, 2015
Markets have come off nearly 320-odd points in last six sessions. Today as well, though we can expect a modestly positive but quiet opening, the upsides will remain capped to the extent of pattern resistance that he Markets have broken. Though there are faint chances of technical pullback the upsides will remain limited until the Markets confirm any signs of bottom formation. Slightest of the weakness will see the Markets testing its 52-week lows and another pattern support of 7545 levels.

The RSI—Relative Strength Index on the Daily Chart is 29.4823 and it now trades in oversold territory. Though it does not show any bullish or bearish divergence, it has reached its lowest value in last 14-days which is bearish. The Daily MACD remains bearish as it trades below its signal line.

On the derivative front, the NIFTY December futures have added over 2.93 lakh shares or 1.52% in Open Interest. This signifies some creation of short positions as well. The NIFTY PCR stands unchanged at 0.78.

Coming to pattern analysis, the Markets have breached one of its important triple bottom pattern supports of 7680 levels. This level, since now breached is likely to act as resistance in event of any technical pullback. The Markets may see mild technical pullback but the overall fabric has turned bearish and such pullbacks are likely to remain capped at 7680-7700 levels. Any weakness will see the Markets testing its 52-week lows of 7545 levels, which is also expected to act as support. However, given the oversold nature of the Markets, some technical pullbacks cannot be ruled out, even if it remains limited in nature.

Overall, today we can expect a quiet opening in the Markets. Some pullback may be seen later in the day but at the same time, it will continue to remain vulnerable to further selloffs from higher levels. However, any technical pullbacks / up moves should be utilized to book and protect swing profits but overall, it is advised to continue to remain very limited on exposures and avoid major purchases until the Markets shows some sign of bottom formation. 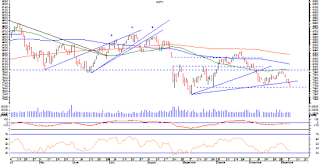 The RSI—Relative Strength Index on the Daily Chart is 33.8617 and it does not show any failure swing. The NIFTY has formed a fresh 14-period low but RSI has not yet and this is Bullish Divergence. The Daily MACD has reported a negative crossover and is now bearish as it trades below its signal line.

On the derivative front, the NIFTY December futures have shed 89,925 shares or 0.46% in Open Interest. The figure remains negligible and shows no major unwinding of positions on net basis. The NIFTY PCR stands at 0.78 as against 0.77.

Coming to pattern analysis, the Markets have finally tested its pattern supports of 7680 levels as yesterday’s low was very near to that level. As of today, this level stands intact and it comes in the form of triple bottom formed since last September. This remains a important pattern support and any breach is likely to see some more weakness creeping in to the Markets. It would be of paramount important for the Markets to hold on to these levels. Today’s expected negative opening is likely to cause the Markets open below or very near to this support level and the Markets will have  to maintain this level by any means to avoid any weakness.

Overall, the Markets continue to wear a bearish undertone as of now. However, in the same breadth, the Markets have not breached its important support levels as yet. It would be important to see that the Markets maintain those levels and in case of expected negative opening, it improves as we go ahead in the session. While remaining away from creating any major exposures, cautious outlook should be continued for today. 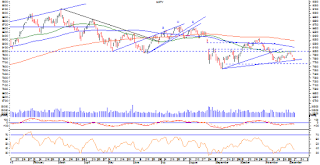 The RSI—Relative Strength Index on the Daily Chart is 37.5615 and it remains neutral as it shows no bullish or bearish divergence or any failure swing. The Daily MACD, however, still continues to remain bullish as it trades above its signal line.

On the derivative front, the NIFTY December futures have shed over 2.01 lakh shares or 1.03% in Open Interest. This indicates moderate unwinding of long positions in the Markets. The NIFTY PCR stands at 0.77 as against 0.79.

Coming to pattern analysis, the Markets yesterday managed to hang on to one of its pattern support in form of a rising trend line. However, today’s lower opening is likely to see it opening below that pattern support. Because of this, we may see the Markets testing another major trend support at 7680 levels. The Markets are likely to see some weakness in the immediate short term because of this. However, the overall volumes have been lower and we may continue to see the Markets remaining resilient at lower levels and also attempting to improve while going ahead in the session.

Overall, some weakness is likely to persist in the immediate short term. However, even if the Markets tests it’s another pattern support at 7680 there will not be any structural breach on the Charts. However, given the overall pattern analysis, the Markets may continue to remain subdued in the immediate short term. It is advised to refrain from taking any fresh exposures and continue to maintain cash along with cautious outlook on the Markets. 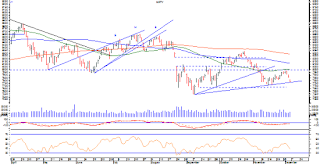 MARKET TREND FOR MONDAY, DECEMBER 07, 2015
The Markets poses itself very precariously at the current levels after Friday’s Close. The Markets have ended their day at a important pattern support. Today, it is likely to see a significantly decent opening but it would be very crucial and important to see if it is able to sustain its opening gains and manages to capitalize on its initial gains. This would be extremely important for the Markets in order to avoid any weakness from creeping in more in immediate short term.
For today, the levels of 7820 and 7875 will act as immediate resistance for the Markets. The supports come in at 7750 and then much lower at 7680 levels.
The RSI—Relative Strength Index on the Daily Chart is 38.5753 and it remains neutral as it shows no bullish or bearish divergence or any failure swing. The Daily MACD continues to remain bullish as it still trades above its signal line. On the Weekly Charts, the Weekly RSI is 41.4043 and is neutral without showing any bullish or bearish divergence or failure swing. The Weekly MACD remains bearish as it trades below its signal line.
On the derivative front, the NIFTY December futures have added over 1.82 lakh shares or 0.94% in Open Interest. This very clearly signifies that there has been creation of net shorts in the Friday’s session. Though this figure may not be significant, it is important enough to indicate that there has been no offloading of long positions. The NIFTY PCR stands unchanged at 0.79.
Coming to pattern analysis, the Markets have proved the levels of 8000 once again as its one of the major pattern resistance as it retraced over 200-odd points after resisting there. As of Friday, it closes at one of its important pattern support once again. Though a positive opening is all likely to day, as mentioned earlier, it would be of paramount importance for the Markets to sustain that positive opening and build up on that later. Until this happens, the Markets remain vulnerable to breach this pattern support as well which may then take the Markets to another important support levels of 7680. However, it is unlikely in the immediate short term if the Markets manages to hang on to its current support.
All and all, the Markets are set to see a positive opening but are just not completely out of the woods. As mentioned earlier, sustaining a possible positive opening would be of paramount importance for the Markets to avoid testing it’s another pattern support. Though the bias certainly remains a bit positive, it is advised to keep the approach heavily selective and stock specific as sector specific out performance will continue. Cautious optimism is advised for today.
Milan Vaishnav,
Consulting Technical Analyst