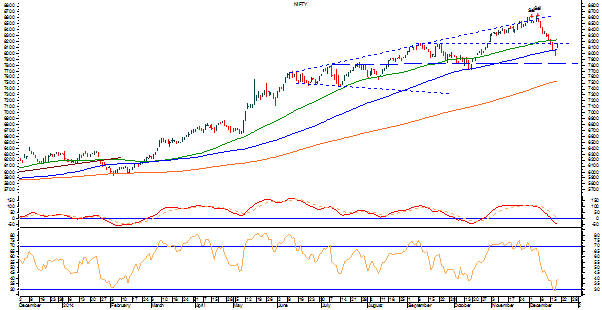 The RSI—Relative Strength Index on the Daily Chart is 39.9828 and it has just moved above from bottoming area which is bullish. It does not show any bullish or bearish divergence or failure swing. The Daily MACD still remains bearish while trading below its signal line. On Candles, A morning star occurred (this is a three-candle pattern).  This is a bullish pattern that often signifies a major bottom.

On the derivative front, the NIFTY December futures have shed over 19.20 lakh shares or over 8.02% in Open Interest. This very clearly signifies that there has been a heavy short covering from lower levels which has fuelled this pullback. It would be extremely important to see that this gets replaced with a fresh buying from here on.

Going on from here, it is extremely necessary to remain highly watchful in the Markets. The Markets have taken a first step towards by giving a technical pullback. It would be necessary that it sees fresh buying going ahead. As the Markets are not yet completely out of the woods, it is necessary to remain highly selective in making fresh purchases. In order to avoid intermediate weakness, it would be necessary for the Markets to move past and close above its 50-DMA. Overall, while maintaining liquidity, positive caution is continued to be advised for the day. 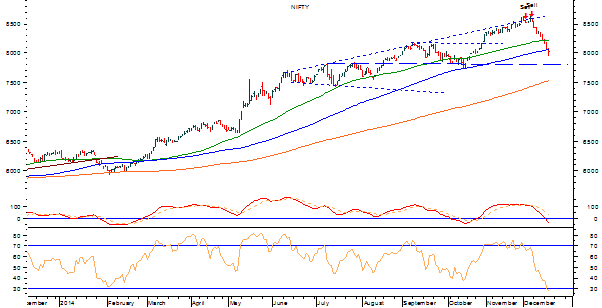 The session remains a very crucial one as the Markets have closed a notch below its 100-DMA. However, we can expect a modestly positive opening in the Markets as they remain oversold and a technical rebound remains imminent. The levels of 8059 remains crucial and it would be important for the Markets to move past and sustain above 8060 levels in order to avoid any further weakness.

The RSI—Relative Strength Index on the Daily Chart is 28.1640 and it has reached its lowest value in last 14-days which is bearish. However, it does not show any bullish or bearish divergence and it now trades in “oversold” area. The Daily MACD remains bearish as it continues to trade above its signal line.

On the derivative front, NIFTY December futures have added modest 12,400 shares or nominal 0.05% in Open Interest. There have been no major unwinding or shorts were seen in the system.

Taking a look at pattern analysis, the Markets have lost nearly 650-odd points of NIFTY in last couple of sessions while resisting to a upper rising trend line of a broadening formation. During this phase, the Markets have now formed a intermediate top at 8623 levels. However, it has seen over 66% retracement and forms a good case for a technical rebound. The constant addition of short positions and the “overbought” nature of the Markets will aid to this.

Overall, the Markets are due for a technical rebound at any time. It has attempted one while recovering from the lows and is likely to continue its effort as well. It can mildly resist to the 100-DMA levels of 8059-60 but it is likely that it would move past this level. It is critically important for the Markets to move past this level in order to successfully attempt an up move. While very small amounts of selective purchases may be made, overall, positive caution is advised while maintaining liquidity for the day. 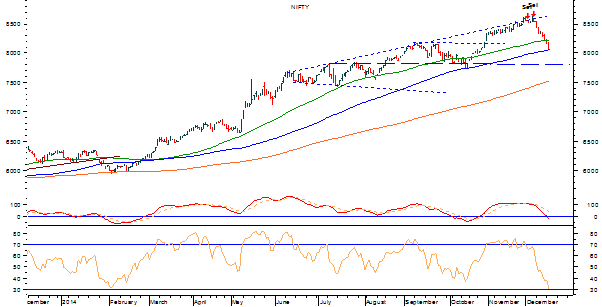 Markets now sit at a great possibility of a technical rebound. It has taken support at 100DMA, which is one of the major support levels and also, at the same time, have got “oversold”. Having said this, we can expect a positive opening in the Markets. In event of a weaker opening, we can expect the Markets to attempt a rebound from lower levels. Until broken, the levels of 100-DMA would continue to act as major support at Close levels.

The RSI—Relative Strength Index on the Daily Chart is 29.7520 and it has reached its lowest value in last 14-days which is bearish. However, it does not show any bullish or bearish divergence and it now trades in “oversold” area. The Daily MACD remains bearish trading below its signal line.

On the derivative front, the NIFTY December futures have added over 4.03 lakh shares or 1.72% total open interest. This signifies that there are big amounts of shorts that exists in the system.

Overall, while NIFTY has corrected over 570-odd points from its lifetime highs, the Markets now attempts to take support at its 100-DMA. Further, over and above now trading in “oversold” area, the Markets is also sitting on significant amount of short positions. It has kept adding  to OI on its way down in almost all sessions. Given this, it sits very favourably on possibility of a technical rebound. Given this possibility, it is advised to now begin making selective purchases as even in event of some weakness,  a technical rebound can be expected.

We have not been able to come out with regular edition of Daily Market Trend Guide in PDF Format. However, Market Forecast for the  Day is reproduced below in brief. Inconvenience caused is sincerely regretted.BRIEF MARKET FORECAST FOR THE DAY
The analysis once again continue to remain more or less on similar lines like yesterday. The Markets have continued to take support at its 50-DMA at Close levels. Today, we can once again expect a lower opening but at the same time we can also expect resilience from the Markets.
The RSI on Daily Chart is 37.6863 and it has reached its lowest value in last 14-day which is bearish. It does not show any bullish or bearish divergence. The Daily MACD trades below its signal line.
Overall, the Markets are likely to see lower opening but at the same time there are bright chances that it improves as we go ahead in the session. The supports would come in at 8150 levels again. It is once again advised to refrain from any fresh shorts and continue to maintain liquidity with positive caution in the Markets. A technical rebound is likely.
Milan Vaishnav,
Consulting Technical Analyst,Af. Member: Market Technicians Association (MTA), USAAf. Member: Association of Technical Market Analysts, INDIAwww.MyMoneyPlant.co.in
http://milan-vaishnav.blogspot.com
+91-98250-16331
milanvaishnav@mymoneyplant.co.in
milanvaishnav@yahoo.com
Posted by MyMoneyPlant.co.in at 12/16/2014 09:04:00 AM No comments: 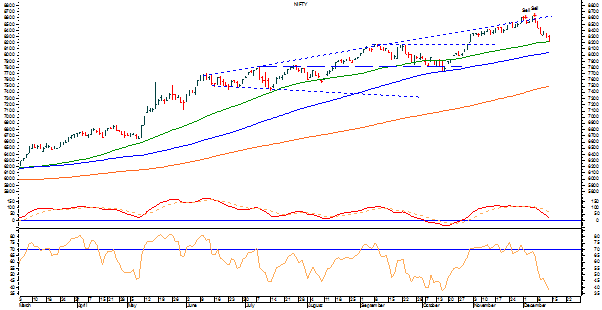 On Friday, the Markets have went on to test its important support levels of 8216 in form of its 50-DMA. Today, the Markets would open reacting to weaker than expected IIP data and also the CPI inflation data which came out little better. However, we can once again expect a negative opening in the Markets. However, it is likely that we see some improvement with the levels of 50-DMA holding out as support as shorts have also continued to get piled up.

On the derivative front, the NIFTY December futures have went on to add another 10.02 lakh shares or 4.53% in Open Interest. This goes on to indicate heavy piling of short positions in the system.

Taking a cue from pattern analysis, on the Weekly and Daily Charts, the Markets have retraced significantly after resisting to the rising trend line of the broadening formation. This formation is more clearly visible on the Weekly Charts. Having said this, it becomes important to point out that there has been no significant breach on the Charts as the Markets continue to trade above all of its DMAs.

Overall, even if we see a negative opening today, there are chances that the Markets improve as we go ahead in the session or at least shows some resilience. In event of closing below the 50-DMA levels, it is likely that it does not break it filter even after that. Given this scenario, it is advised that fresh positions should be restricted to selective stocks. Also, shorts should be avoided as no major breakdown in Markets is expected due the short positions that are being seen built up. Overall, cautious optimism is advised for the day.