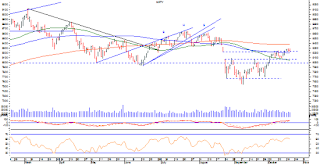 MARKET TREND FOR FRIDAY, OCTOBER 23, 2015
Markets will open today after a holiday yesterday and on Wednesday’s session, it has held on successfully to its pattern support of 8230-40 range and have ended above that. Today, we are set to see a strong and nearly gap up opening today following positive global cues. The cues have been positive following ECB’s surprise comments while reviewing its QE in December. Leaving this apart, the Markets have been displayed resilience while consolidating in previous sessions.

The RSI—Relative Strength Index on Daily Chart is 61.3643 and it remains neutral as it shows no bullish or bearish divergence or any failure swings. The Daily MACD remains bullish as it trades above its signal line.

On the derivative front, the NIFTY October futures have shed over 5.45 lakh shares or 2.78% in Open Interest. This continues to show some amount of unwinding of long positions as well as some short covering from the low point of the day. The NIFTY PCR stands at 1.05 as against 1.04.

Coming to pattern analysis, the Markets have been in congestion zone for over couple of sessions how. The levels of 8230-40 have been its important pattern support in event of any downside. If the Markets breach this support on the downside, it may slip once again in to the broad consolidation zone that it has been trading in this entire month. Keeping this aside, today’s likely gap up opening is likely to cause the Markets open near its resistance levels. It would be very much important to see if the Markets are able to maintain and capitalize on these gains. The Markets may move ahead to test its 200-DMA in short term if today’s opening gains are maintained and capitalized. Also, in the same breadth, given the F&O data, the Markets also remain somewhat vulnerable to get sold into at higher levels once again.

Keeping this in view, until the Markets gives a clear directional breakout on the upsides with good volumes and participation, all these up moves and higher openings should be primarily be used to book and protect existing profits. Going further, if any consolidation is seen then any minor dips should be bought into on a very selective basis. Shorts should be refrained from. Overall, continuance of cautious outlook is advised for today. 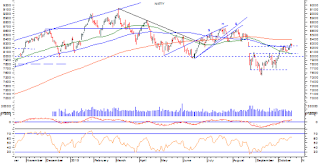 MARKET TREND FOR WEDNESDAY, OCTOBER 21, 2015
The analysis remains more or less on similar lines once again as the Markets continues to remain in consolidation mode. With us having truncated week, (tomorrow being a trading holiday), it is likely that we will continue to see somewhat lack of volumes and participation in the Markets. The pattern resistance that the Markets were able to move past will continue to act as support and any breach of that level will take the Markets back into the big broad consolidation zone once again.

The RSI—Relative Strength Index on the Daily Chart is 62.1962 and it remains neutral as it shows no bullish or bearish divergence or any failure swings. The Daily MACD remains bullish as it trades above its signal line. On the Candles, a Engulfing Bearish Pattern has occurred. This since formation has occurred after a significant up move / pullback; it is likely to keep the Markets in congestion zone for some more time. However, this needs confirmation.

On the derivative front, the NIFTY October futures have shed over 3.44 lakh shares or 1.73% in Open Interest. This figure is little discouraging is it shows some offloading of positions having taken place.

Having a look at pattern analysis, the Markets have managed to keep is head above important resistance levels of 8320-40.  These are the levels that the Markets managed to move past in previous sessions and having done this, these levels are expected to act as support in event of any further congestion / consolidation. It would be important to see that the Markets remain above these levels. Any breach in these levels on the downside will take the Markets back in to the broad consolidation zone and will diminish the chances of any significant and sustainable up move.

Overall, the Markets will see a subdued and quiet opening and will require good amount of involvement / participation for a proper up move. Until this happens it will continue to oscillate in the congestion zone. It would be also important for the Markets to maintain levels above of 8340 to avoid any further weakness. With the Markets not taking any proper convincing directional call, we continue to reiterate our advice of refraining from creating shorts and making selective but limited purchases with any available dip. Overall, cautious outlook is advised for the day. 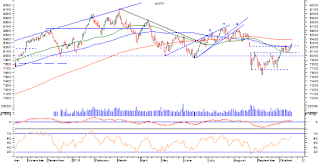 MARKET TREND FOR TUESDAY, OCTOBER 20, 2015
Markets continue to poise them at a critical juncture as it is made a feeble attempt to move out of the congestion zone. Today, we can expect the Markets to open on a modestly positive to flat note and then look for directions. There are chances that the Markets continue to consolidate at higher levels rather than giving a runaway rise. The intraday trajectory that it forms post opening would be crucial to determine the trend for today as well as for immediate short term.

The RSI—Relative Strength Index on the Daily Chart is 63.2688 and it has reached its highest value in last 14-days which is bullish. It does not show any bullish or bearish divergence. The Daily MACD remains bullish as it trades above its signal line.

On the derivative front, the NIFTY October futures have shed over 3.90 lakh shares or 1.92% in Open Interest. This shows some unwinding of positions at higher levels and may cause the Markets to remain in consolidation zone for some more time.

Coming to pattern analysis, the Markets have attempted to move past the upper boundary of the congestion zone but the attempt so far has been bit feeble. Further, it has come while shedding Open Interest and therefore it is likely that the Markets may continue to remain in consolidation zone for some more time. In the same breadth, the 8230-8240 levels which the Markets managed to move past yesterday should act as immediate pattern support. Any breach of the levels on the downside will take the Markets back into the broad consolidation zone. Therefore, it would be important for the Markets to maintain itself above 8230-8240 levels in order to just consolidate for some more time and avoid any weakness.

All and all, the Markets may open flat and see some sideways consolidation in the initial trade. However, given the structure of the technical charts, by no means are the Markets weak and they are in fact making attempts to move out of the consolidation zone that they have been trading in. In event of any more consolidation or temporary downsides, these downsides should be utilized to make  quality purchases on moderate levels while protecting profits going ahead until a clear directional breakout is achieved. 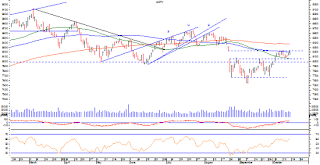 MARKET TREND FOR MONDAY, OCTOBER 19, 2015
Today’s session remain critical for the Markets. The Markets have closed a notch above its 100-DMA but very near to its upper resistance of the pattern. On the other hand, though it is attempting a further breakout, it is likely to open today on a modestly negative note. There are fair chances that the Markets opens a notch below its pattern resistance levels of 8230-8240, just near its 100-DMA and look for directions. The Markets remain inherently buoyant and it would be critically important to see if it attempts a breakout from the congestion zone today.

The RSI—Relative Strength Index on the Daily Chart is 61.5743 and it has reached its highest value in last 14-days which is bullish. It does not show any bullish or bearish divergence. The Daily MACD remains bullish as it trades above its signal line. On the Weekly Charts, the Weekly RSI is 50.5474 and it remains neutral as it shows no bullish or bearish divergence or any failure swing. The Weekly MACD is bearish as it continues to trade below its signal line.

On the derivative front, the NIFTY October futures have added over 2.03 lakh shares or 1.01% in Open Interest. This portrays inherent buoyancy in the Markets. The NIFTY PCR stands at 1.01 as against 1.00.

Coming to pattern analysis, the Markets have been in the congestion zone over last fortnight after it attempted to move past its first pattern resistance. After this, it has been resisting to the upper end of the gap that it formed in the first week of September and this has been acting as its important pattern resistance for quire some time. Though the Markets have attempted to move past and break out of that congestion zone, it still trades a notch below that. Today’s modestly lower opening is likely to keep it below that resistance zone and it would be critically important to see that it moves past that resistance level in order for a fresh sustainable up move.

Overall, until the Markets moves past the levels of 8230-40 levels, it will continue to remain in this broad congestion zone. However, looking at the inherent buoyancy in the Markets, any downsides would remain resilient and it is strongly advised to refrain from creating any short positions. Downsides, if any should be used to make selective modest purchases. While protecting profits at higher levels until a clear breakout, cautious optimism is advised for the day.