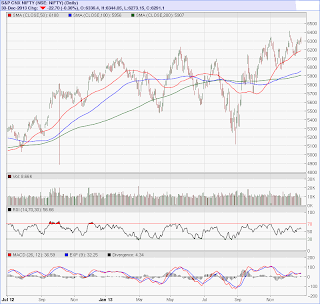 Today’s analysis for the Markets remains more or less on similar lines like yesterday. Today, we are expected to see a modestly positive opening in the Markets. However, given the year-end holidays, the participation in the Markets is likely to remain lower and we might again see a range bound session with low volumes.

On the derivative front, the NIFTY January futures have shed over 4.95 lakh shares or 2.51% in Open Interest. This is little negative as it shows that some profit taking was done yesterday which has resulted in shedding of open interest.

As we have often mentioned in our previous editions of Daily Market Trend Guide, that the patterns on the Daily Chart remain intact. The Markets see no structural weakness as it continues to trade above all of its DMAs at present. However, after yesterday’s session the levels of 6344 have become an intermediate top for the Markets. In order to continue with the up move, it would be very important for the Markets to move past the levels of 6345 and sustain above that.

All and all, we will see modestly positive opening but the overall session is likely to remain range bound with lower volumes. The levels of 6345 would be critical to watch  for as it would act as intermediate top in very short term. Markets will have to move past that level before it continues with its up move. However, the overall trend remans intact. Any downside should be used to make selective purchases. Stock specific and cautiously positive outlook is advised for today. 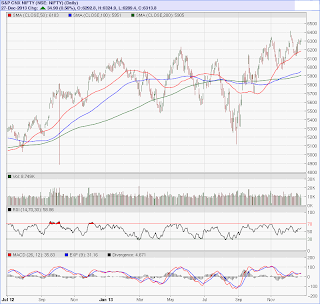 Today, we are likely to see the Markets opening on a flat to mildly positive note and looking for directions again. The year end time after Christmas is seeing very less participation and volumes in the Markets which is usual and it would be like this today as well until next week. The Markets are likely to maintain an overall positive bias while trading in a range.

The lead indicators continue to remain in place. The RSI—Relative Strength Index on the Daily Charts is 58.8605 and it is neutral as it shows no bullish or bearish divergence or any failure swings. The Daily MACD continues to remain bullish as it trades above its signal line.  On the Weekly Charts, the Weekly RSI is neutral at 60.3229. The Weekly MACD too is bullish as it continues to trade above its signal line.

On the derivative front, NIFTY January futures have added over 7.86 lakh shares or 4.15% in Open Interest. This is a positive indication and no unwinding of positions has been observed in the previous session.

Overall, all lead indicators and the overall structure of the Markets on technical chart remain perfectly in shape and intact. Any downside or weakness if at all we see would be more of a consolidation and would be temporary. Any such phase should be used to make selective purchases while protecting profits at higher levels. While continuing to strictly avoid shorts, positive outlook is advised for today. 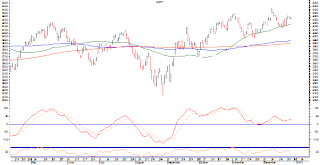 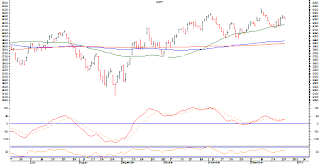