MARKET TREND FOR FRIDAY, SEPTEMBER 30, 2016
The Markets, at this juncture, need to be analyzed from more than one perspective, both technical and otherwise. The breaking of the news in the afternoon about the India carrying out surgical strikes across LoC spooked the equity markets while they ended with a deep cut on heavy volumes. However, this being said, it should also be borne in mind that apart from geopolitical tensions that sprung up suddenly, the Markets had been demonstrating  short term structural weakness on the Daily Charts.  We had categorically mentioned the zone of 8780-8820 being the potential stiff resistance levels for the Markets. Though the news broke out in the afternoon, the Markets were already off its highs of 8800.65. However, it is much evident that the developments after than added to the quantum and ferocity of the downside. Today’s Market action will see some more choppiness while the developments in the region are closely monitored. 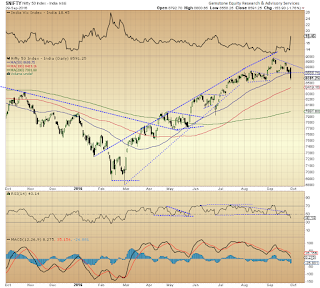 Speaking purely on technical terms, the levels of 8640 and 8680 will now act as major resistance levels in event of any pullback. Support levels of 8530 and 8485 will be important to watch out for.

The RSI—Relative Strength Index on the Daily Chart is 40.1445 and it has reached its lowest value in last 14-days which is bearish. It does not show any bullish or bearish divergence.
The Daily MACD stays bearish trading below its signal line. On the Candles, there is a contradictory reading. A Engulfing Bearish Candle has occurred. On one hand, it can mark a potential pullback as it has occurred after a decline. On the other hand, the Markets have given a downward breach from a pattern and with a Big Black Candle, this has lent credibility to the downward breach and explicitly more weakness in coming days.

The pattern analysis gives a clearer view as well. The Markets have breached on the downside from a Descending Triangle formation on the Daily Charts after forming a lower top at 8900 levels. If we take a purely technical measuring implication of this development, it would be no surprise if the Markets tests its 100-DMA in coming days. On the other hand, the level of 8680 that it breached will now act as a stiff resistance in event of any pullback.

All and all, though we analyzed a technical picture above, the geopolitical developments will continue to dominate the market movement. The volatility and choppiness will continue to remain ingrained and we strongly advise to preserve cash levels. Though downsides may be utilized to make purchases, all technical pullbacks should be vigilantly used to protect positions. Highly cautious approach with preservation of cash is advised.

MARKET TREND FOR THURSDAY, SEPTEMBER 29, 2016
The Markets ended the day with modest gains yesterday after struggling in the initial trade and ended the day with modest gains. The levels of 50-DMA has continued to act as support at Close levels and today, this keeps our analysis on the similar lines. The Markets do not seem completely out of the woods as of now and the levels of 50-DMA and 8680 will remain critical levels to watch out for. Any drift below this will bring short term weakness in the Markets. Today is the expiry day of the current derivative series and we will see the session remaining heavily dominated with rollovers. 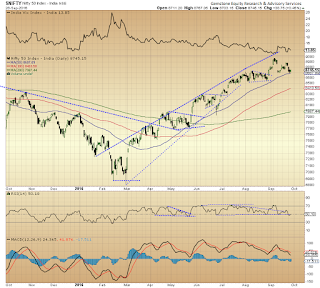 The RSI—Relative Strength Index on the Daily Chart is 50.1787 and it remains neutral as it shows no bullish or bearish divergence or any failure swings. The Daily MACD stays bearish while trading below its signal line.

If we evaluate the overall short term pattern on the Charts, the Markets have formed a lower top at 8900 levels after marking 8968 as its immediate top. The Markets have taken supports around 8680-8700 range twice and this has formed a small Descending Triangle on the Daily Chart. This is potentially bearish in the short term. To fail this pattern, we will need to see the Markets moving above 8870-8900 levels in order to resist from getting weaker. The support zone of 8680 also coincides with 50-DMA which is 8687 and therefore these levels become critically important levels to watch out for. Any breach below these levels will bring in short term weakness on the Daily Charts.

All and all, even if we see short term up move, the Markets will not be completely out of the woods until it moves past 8870-8900 levels.  Until this happens we will see the trading sessions oscillating in a capped range with a negative bias. Today, we might see some consolidation on the Bank stocks while it deals with expectations of a rate cut in coming days. Apart from this, stock specific and sectoral out-performance will continue.

MARKET TREND FOR WEDNESDAY, SEPTEMBER 28, 2016
The domestic equity markets traded precisely on the analyzed lines as they ended with a minor cut after remaining highly volatile and choppy. The levels 8680 continued to remain critical and the Markets nearly tested its 50-DMA. Today, we can see the Markets attempting to stabilize and just like yesterday, the levels of 50-DMA which is 8683 will remain critically important to watch out for. This keeps our analysis on similar lines like yesterday. We also enter the penultimate day of expiry of the current derivative series and this will see the session remaining dominated with rollovers. 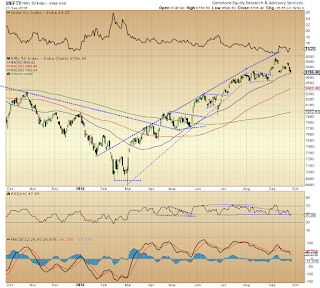 The RSI—Relative Strength Index on the Daily Chart is 47.0865 and it has reached its lowest value in last 14-days and this is Bearish. The Daily MACD stays bearish while it trades below its signal line.

Coming to pattern analysis, it is very much evident that a lower top has been formed at 8900 levels after the Markets formed its intermediate top at 8968 levels. It also becomes important to note that there will be no significant up move unless the Markets move past 8900 levels and until this happens will see the Markets oscillating in a trading range. In the immediate short term, the levels of 50-DMA will continue to act as important support at Close levels. Any drift below this level will induce some more weakness in the Markets.

In the session tomorrow, we may see Banks attempting to find bottom. Select Midcaps and other sector specific out-performance will continue. It is advised to approach the Markets with individual stock specific strategies. Positions on either side should be kept limited and more cash should be preserved as the markets will establish its directional bias on either side. Though, with no structural damage on the Daily Charts, cautious optimism is advised for today.

MARKET OUTLOOK FOR WEDNESDAY, SEPTEMBER 27, 2016
Domestic equity markets had a thoroughly disappointing session as it posted worse-than-expected performance yesterday and ended the day with a deep cut. Today, we once again expect a soft start to the Markets. Though some attempts to stabilize at current levels will be seen, two readings stand established on Daily Charts. First, though there is no structural breach on the Daily Charts as yet, the levels of 8968 have been confirmed as an immediate top for the Markets; and second, the levels of 8900 have been marked as a “lower top” on the Daily Charts. The levels of 50-DMA which is 8680 will be crucial level to watch for. 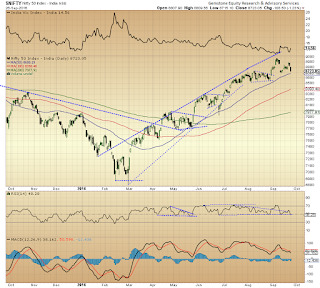 The RSI—Relative Strength Index on the Daily Chart is 48.2820 and it has reached its lowest value in last 14-days which is bearish. Also, RSI has set a fresh 14-period low whereas NIFTY has not yet and this is Bearish Divergence. The Daily MACD stands bearish as it trades below its signal line. A Falling Window (a gap) on the Daily Charts makes it even more likely that we may see some more weakness persisting for some time.

On the derivative front, the NIFTY September futures have shed over 63.49 lakh shares or 20.26% in Open Interest. The October futures added over 56.22 lakh shares or 178.55% as rollovers were visible in the session.

Pattern analysis clearly confirms the level of 8968 as the immediate top for the Markets. After nearly 100% retracement from the breakout levels of 8700-8730, retracement again to these levels from 8900 markets this as the lower top on the Daily Charts. Due to this development, once again the attention shifts to the critical support area of 8700-8730 and the subsequent support levels of 50-DMA which is 8680. Any breach below the 50-DMA mark will bring in more weakness for the intermediate term.

Overall, Markets continues to trade above all of its Moving Averages and therefore there is no structural breach on the Charts as yet. However, as mentioned, the levels of 50-DMA will be critical support levels at Close to watch out for. Some more weakness may creep in if these levels are breached. The rollovers will continue to keep the session choppy and volatile. We will continue to see out-performance from IT, select Pharma and MidCapt stocks.

MARKET TREND FOR MONDAY, SEPTEMBER 26, 2016
Indian Equity Markets have continued to consolidate and Weekly Charts and on Daily Charts as well, they are likely to continue to consolidate in a capped range while the overall trend continue to remain buoyant and intact. Monday’s session is likely to see a modest start to the Markets sand the levels of 8880 acting as intermediate resistance. Beginning tomorrow, we also enter expiry week and we will continue to see the coming sessions remaining dominated with rollover centric activity as well. 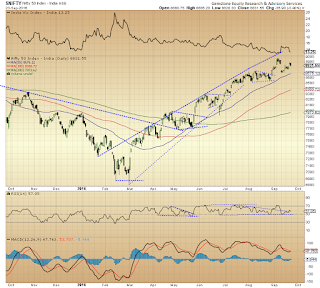 The RSI—Relative Strength Index on the Daily Chart is 57.0474 and it remains neutral as it shows no bullish or bearish divergence or any failure swings. The Daily MACD stands bearish as it trades below its signal line. A Big Black Candle occurring near the 8890 levels have added credibility to the possible resistance levels in this area.

On the derivative front, the NIFTY September futures have shed over 8.88 lakh shares or 2.76% in Open Interest. This continues to point towards some unwinding/offloading of long positions.

Coming to pattern analysis, the Markets have formed an intermediate high at 8968 levels and this level remain sacrosanct as this point of time. A lower top has been observed at 8890 levels and a big black candle formation at this point establishes the credibility of this resistance level and minor confirmation of a lower top. Given this formation, some amount of consolidation cannot be ruled out even if the Markets see some temporary range bound movement.

All and all, the overall structure on the Daily Chart remains intact and inherent trend remain buoyant. The levels of 8750 will be critical support in event of any consolidation. Individual stock specific strategy should be adopted and we reiterate to utilize any dips, if any, to make select purchases as overall trend remains intact.