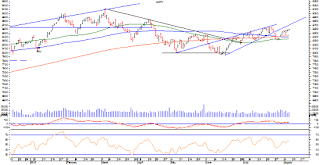 MARKET TREND FOR FRIDAY, AUGUST 07, 2015
Today’s analysis continues to remain once again more or less on similar lines that of yesterday. The Markets are likely to open again on modestly negative note and look for directions. The Markets are likely to once again continue to consolidate on broad lines but the under currents in  the Markets are seen getting buoyant as suggested by F&O data and lead indicators. However, until the consolidation continues, the Markets will continue to trade with some amount of volatility ingrained in it.

The RSI—Relative Strength Index on the Daily Chart is 57.7128 and it continues to remain neutral as it shows no bullish or bearish divergence. The Daily MACD has reported a positive crossover and it now trades above its signal line and is bullish.

On the derivative front, the NIFTY August series has added further over 2.28 lakh shares or 1.37% in Open Interest. This signifies that there has been no offloading of long positions and also some moderate buying has been seen. In any case, this is not a weakening indicator / figure.

Coming to pattern analysis, the Markets have continued to resist to the rising trend line drawn from 8000-levels. As mentioned often in our previous editions of Daily Market Trend Guide, this lines is now a resistance for the Markets. It was a support which the Markets breached on the downside. For the Markets to resume it’s up move, it will have to move past this rising resistance line with volumes and conviction and stay above that. Until that happens, the Markets will continue to consolidate in a broad trading range.

Overall, the Markets may open weak but it is likely to consolidate and even see some improvement as day progresses. However, so long as it continues to trade below its resistance, it would remain susceptible to profit taking bouts from higher levels. However, lead indicators and F&O data suggest some buoyancy building up inherently. Overall, any dips can be continued to be utilized for making fresh purchases. 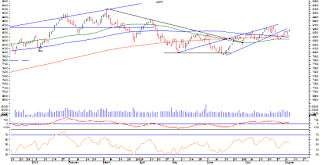 MARKET TREND FOR THURSDAY, AUGUST 06, 2015
The Markets are likely to open on a flat to mildly negative note and find itself continue to consolidate in the given broad range. The intraday trajectory that the Markets forms will be crucial but at the same time, the Markets continue to trade below its pattern resistance and this keeps the Markets vulnerable to profit taking bouts from higher levels.

The RSI—Relative Strength Index on the Daily Chart is 57.5168 and it continues to remain neutral as it shows no bullish or bearish divergence or any failure swings. The Daily MACD too remains bearish as it continues to trade below its signal line.

On the derivative front, NIFTY August futures have added over 5.95 lakh shares or 3.71% in Open Interest. This translates into underlying bullish  bias of the Markets. The NIFTY PCR stands at 0.96 as against 0.92 yesterday.

Coming to pattern analysis, the Markets so far continue to trade below its pattern resistance extended trend line drawn from 8000-levels. So long as the Markets continue to tread below this level, it is likely to continue to remain in a broad consolidation range. Also, this is likely to keep the Markets vulnerable to sharp profit taking bouts from higher levels. However, with the overall structure of the Chart read along with lead indicators and F&O data, the undercurrent continue to portray buoyancy.

Overall, the Markets do have some room for its consolidation to continue. Given this fact, we may continue to make some fresh purchases but do so very selectively. However, as mentioned earlier, the overall undercurrent continues to portray buoyancy, any downsides should be utilized to add quality purchases. Overall, cautious optimism is advised for the day. 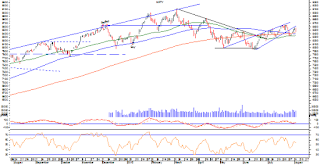 MARKET TREND FOR WEDNESDAY, AUGUST 05, 2015
Markets are again set to open on a mildly positive to quiet note and look for cues. However, given the overall technical structure of the Charts as well as F&O data, it is likely that the Markets continue to remain in consolidation mode for some more time to come. It is likely that is oscillates in a wide range of 8650-8400 range while also remaining above all of its DMAs at the same time. The intraday trajectory that the Markets form post opening would be critical to dictate the trend for the day.

The RSI—Relative Strength Index on the Daily Chart is 54.4982 and it is neutral as it shows no failure swings or any bullish or bearish divergences. The Daily MACD continues to remain bearish as it trades below its signal line.

On the derivative front, NIFTY August futures have shed over 7.96 lakh shares or 4.73% in Open Interest. This can be interpreted in two ways. On one hand, at Close levels, we see clear shedding of Open Interest with the decline in NIFTY. Also, we can observe that the Markets lost OI while it saw a sharp pullback from lower levels yesterday. Overall, this means that there is no comfort levels on either side in the Markets.

Coming to pattern analysis, the Markets are continuing to witness to the rising trend line support which it broke couple of days back. This rising trend line, which was a support earlier is likely to continue to act as its resistance on the upside for couple of days more to come. This would keep the Markets in a consolidation zone while it trades in a bit wide range with some amount of volatility ingrained in it.

Overall, we continue to reiterate cautious stand on the Markets. There has been sharp sectoral out performance and divergence in gains observed. However, the Markets shall also witness sharp bouts on either side leaving it vulnerable to some volatility. It is continued to be advised to keep fresh exposure limited to very select stocks and maintain adequate liquidity and cautious optimism in the Markets.

MARKET TREND FOR TUESDAY, AUGUST 04, 2015
The Markets are once again set for a flat to mildly negative opening. The Markets continue to trade below its resistance zone that we have been mentioning in previous two editions of Daily Market Trend Guide and today as well, it is likely to continue to resist to those levels with a positive bias. The Markets are also set to react to the RBI Credit Policy coming up later in the day. However, with the rates very much likely to remain unchanged, this would remain a non-event for a larger extent.

The RSI—Relative Strength Index on the Daily Chart is 56.4044 and it remains neutral as it shows no bullish or bearish divergence or any failure swings. The Daily MACD still continues to remain bearish as it trades below its signal line.

On the derivative front, NIFTY August futures have shed over 4.04 lakh shares or 2.35% in Open Interest. This figures indicates that there can be some more consolidation in the Markets before it resumes its up move. In other words, such data suggests prevention of runaway rise in the Markets unless the Markets get a immensely positive trigger which is very less likely.

Coming to pattern analysis, the Markets continues to trade below the trend line which is breached on the downside couple of sessions back. As mentioned often in our previous editions of Daily Market Trend Guide, this rising trend line will continue to act as resistance (which was earlier a support). Further, because of the rising nature of this trend line, the levels that the Markets need to move past for a breakout too keeps rising. This prevents a clear breakout, or at least makes it difficult.

Overall, the Markets are likely to continue to see a ranged movement with some moderate amount of volatility ingrained in it. The RBI Policy is likely to remain a non-event but any cut, which is just not expected, will act as a positive trigger. Overall, the Markets are likely to remain in a range with some intermittent bouts of profit taking at higher levels. Purchases should be kept restricted and extremely selective until the directional bias in the Markets gets clear.