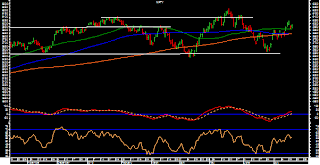 For today, expect the Markets to open on a modestly positive note and continue with the up move. There has been a disruption in the up move that the Markets were witnessing due to RBI Announcements but more or less it should continue as there is no structural breach on the Charts. The Intraday trajectory would be important the Markets would require to maintain the levels above its 50-DMA.

The lead indicators continue to remain firmly in place. The RSI—Relative Strength Index on the Daily Chart is 56.9334 and it is neutral as it shows no bullish or bearish divergence or failure swings . The Daily MACD too remains bullish as it trades above its signal line.

On the derivative front, NIFTY Futures have continued to add nominal open interest. This is minor positive sign as there has been no shedding of open interest reported. However, fresh longs still remains to get built up which shall give impetus to further up move.

Having said this, there are some important things to note. One, there has been no structural breach on the technical charts despite disruption of the up move caused by RBI Announcement on MSF front. Secondly, the Markets have not shown too much of unwinding yesterday. It would be important to see that some fresh longs get build up and the markets remain above the levels of 50-DMA.

All and all, the Markets would see a modestly positive start and continue with its yesterday’s pullback, at least in the initial trade. There will be no structural breach on the Charts so long as the Markets trade above the levels of 50-DMA. However, volatility may remain. In such case, profits on long positions should be protected at higher levels but shorts should still be strictly avoided.  Downticks should be used to make selective purchases. Overall, cautious optimism is advised for today. 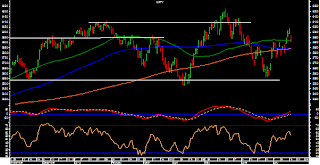 Yesterday we saw deviation of trend as compared to the global markets as the Markets reacted to the RBI Announcements. However, today, on the positive side, even with the Global Markets trading flat, we are likely to see modestly positive opening today and some respite from the weakness that we saw yesterday is certainly on cards. With no technical breach on the Charts as yet, we are likely to recover some of the damage caused yesterday.

All lead indicators still continue to remain in place. The RSI—Relative Strength Index on the Daily Chart is 55.9327 and it is neutral as it shows no bullish or bearish divergence or any kind of failure swings. The Daily MACD is bullish as it comfortably trades above the signal line.

On the derivative front, the NIFTY July Futures have shed over 14.12 lakh shares or over 7.85% in Open Interest. However these are unadjusted figures available from the exchange and the actual figures stands much lower. However, shedding of OI is certainly reported and therefore, it would be important to see that this should get replaced with fresh longs as buying is expected to emerge at lower levels.

Overall, if we look at the technical charts, going by both the lead indicators as well as pattern analysis, there is certainly no breach on the patterns on the technical charts. The Markets continue to trade above all of its 3 moving averages and there are chances that it carries on further from here. It is not likely to see any dip below the levels of 50-DMA.

All and all, it would be important for the Markets to trade above 50-DMA levels of 5914. It would be important to see the Markets not breaching 5900-5915 levels or else some more short term weakness is likely to creep in. However, there are fair chances of this being averted with stock futures reported to have added over 2 Crores shares in OI. With some pressure continuing on select stocks no major breach of any pattern or support is seen. In such case, very selective purchases may be made and shorts should be strictly avoided. Positive caution advised as there is no breach of any pattern on Charts as of today. 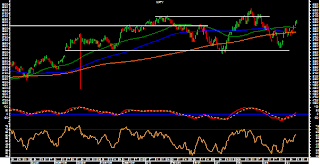 The Markets, even with the global markets trading flat to mildly positive, are likely to see a negative opening today. This would be a knee jerk reaction to the RBI’s announcement post market hours yesterday wherein it recalibrated the Marginal Standing Facility at 10.25% to curb the Rupee market volatility. This has put an end to any rate cut hope in the near future.

The lead indictors continue to remain in place. The RSI—Relative Strength Index on the Daily Chart is 61.4857 and it has reached its highest value in last 14-days which is bullish. It does not show any bullish or bearish divergence. The Daily MACD continues to remain bullish as it trades above its signal line.

On the derivative front, NIFTY has continued to add over 3.23 lakh shares or 1.83% in Open Interest.

Having said this, it is important to note that the Markets have recovered over nearly 450-odd points after it made lows in the last week of June after a brief consolidating period in between. The Markets were headed towards it s pattern resistance of 6095-6100 wherein it were expected to consolidate again. However, the RBI’s announcement is likely to put a break on it midway and this would be a non-technical factor would affect sentiments for the immediate short term and will send the Markets for a knee jerk reaction.

Overall, even with lower opening, it would be around its important supports and there would be no breach on the technicals. Also, this would  be more like knee jerk reaction for the short term. In such circumstances, the Markets do tend to defy technicals, but ultimately the technicals tend to take over. There are chances that the Markets either trades sideways post opening or might improve a bit as well. We strictly advice you to avoid shorts if the Markets open lower. Any dip should be utilized to make selective purchases as selective out performance would be seen.  However, cautious outlook is advised for today. 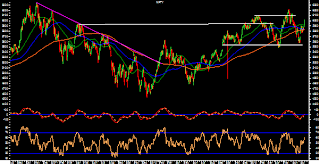 On the Daily Charts, the Markets have successfully achieved a breakout on the upside from the broad trading range and it is expected that the Markets shall extend its gains in the immediate short term. Expect the markets to open on a flat to modestly positive note and look for directions. However, given the sharp rise, minor profit taking at higher levels cannot be ruled out while keeping the overall trend intact.

All lead indicators continue to remain firmly in place. The RSI—Relative Strength Index on the Daily Chart is 60.4332 and it has reached its highest value in last 14-days which is bullish. It does not show any bullish or bearish divergence. The Daily MACD continues to remain bullish as it trades above its signal line. On the Candles, A rising window occurred  (where the top of the previous shadow is below the bottom of the current shadow).  This usually implies a continuation of a bullish trend.  There have been 7 rising windows in the last 50 candles--this makes the current rising window even more bullish.

On the Weekly Charts, the RSI is 56.2327 and it is neutral as it shows no bullish or bearish divergences or any kind of failure swings. The Weekly MACD is bearish as it trades below it signal line but it is moving towards reporting a positive crossover.

On the derivative front, the NIFTY July Futures have continued to add over 8.44 lakh shares or over 5.02% in Open Interest. This further continues to suggest long built up and also signifies that the Friday’s rise has been due to addition of longs and not due to short covering.

Having said this, it is clear that the Markets have added long positions while it broke out from its trading range. The markets have successfully achieved a breakout and now the key would be to see if it sustains it. However, due to sharp rise in previous two sessions, mild chances of minor profit taking at higher levels cannot be ruled out. However, given all the technical factors that remain absolutely in place, the Markets are expected to test 6100 levels before it consolidates again.

All and all, as stated above, all lead indicators and technicals remain firmly in place. There is no external event either that would pose immediate threat to the Markets in the immediate short term. Given this, it is likely that the Markets continue to extend its up move. However, given the sharp rise in previous two session, mild chances of profit taking at higher levels cannot be ruled out. This is keep the markets in trade in narrow band. However, while shorts should be avoided, any dip should be used to add selective long positions. Overall, continuation of positive outlook is advised for today.