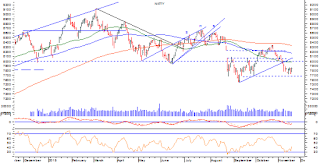 MARKET TREND FOR FRIDAY, NOVEMBER 20, 2015
Though the Markets have rebounded yesterday, the rise has come in purely on account of short covering. The Markets continue to trade in a broad range and today we can expect the Markets to open on a flat to modestly negative note. The Markets are expected to remain bit weak in coming days unless it moves out from a broad trading range that it has formed over couple of days. Today’s opening and the intraday trajectory formed thereafter will play a crucial role to determine the trend. The technical indicators and overall structure suggest some minor weakness to continue in the Markets.

The RSI—Relative Strength Index on the Daily Chart is 41.7189 and it remains neutral as it shows no bullish or bearish divergence or any failure swings. The Daily MACD continues to remain bearish as it trades below its signal line.

On derivative front, the NIFTY November futures have shed over 9.59 lakh shares or 5.49% in Open Interest. This is a clear evidence of short covering in the Markets yesterday. The NIFTY PCR stands at 0.79 as against 0.72 yesterday.

Coming to pattern analysis, the Markets have not shown any significant pullback after forming recent lows. The pullbacks have met with subsequent selling on the other day and this phenomenon has formed a broad trading range / congestion on the Daily Charts. The Markets have certainly attempted to form a bottom but it has not confirmed it so far. Also, all the pullbacks have resulted in to heavy reduction in Open Interests. For the Markets to confirm the pullbacks, it will need up moves supported by fresh long positions. It is important to note that any short term weakness, if at all any, will increase the possibilities of the Markets testing its pattern supports of 7680.

Overall, currently the Markets continue to remain much in the no-trade zone. So far as taking a view is concerned, it is much evident that the Markets are completely lacking directional bias and are oscillating in a given zone. Though the lower levels are met with short covering, it is not being supported by buying as such. We continue to reiterate to keep the exposures very selective and limited while continuing to adopt a cautious outlook on the Markets. 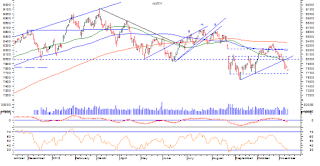 MARKET TREND FOR THURSDAY, NOVEMBER 19, 2015
Technical rebound is likely once again today after yesterday’s sharp decline. Markets are likely to open on a positive note and look for directions. The technical structure remains somewhat weak and it would be critically important to see if the Markets maintain its opening gains and capitalize on it as we go ahead in the session. Markets are not completely out of woods. Though technical rally cannot be ruled out today and in couple of days ahead, the Markets are not completely out of woods until it confirms its bottom.

The RSI—Relative Strength Index on the Daily Chart is 32.1928 and it does not show any failure swing. The NIFTY has formed its fresh 14-day low but RSI has not and this is bullish divergence. The Daily MACD remains bearish as it continues to trade below its signal line.

On the derivative front, the NIFTY November futures have added over 6.52 lakh shares or 3.84% in Open Interest. There has been addition in short positions with yesterday’s decline. The NIFTY PCR stands at 0.71 as against 0.72.

Coming to pattern analysis, the Markets once again moved yesterday towards one of its important pattern support levels of 7680. So far, the Markets continues to trade above this critically important support level of 7680 and today’s positive opening is likely to keep Markets well above that. The nearly oversold nature of the Markets and the immediate indications from the lead indicators suggest that the Markets will once again have relief technical rebound from these levels. However, if we extend the reading to couple of days more ahead of us, it is equally likely that the Markets once again see some selling pressure from higher levels.

Overall, technical rebound is likely but the Markets are expected to continue to remain in a broad range. It will certainly see a technical pullback and as of now it has not breached any of its important support levels as well. However, the key would be to see if the Markets build up on its opening gains. Also in coming days, it would be equally important to see if the Markets forms and later confirms its bottom. Until then, it is most likely that the Markets trade in a broad range remaining vulnerable to selling pressure at higher levels. 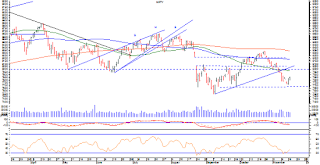 MARKET TREND FOR WEDNESDAY, NOVEMBER 18, 2015
Analysis for today remains more or less on similar lines that of yesterday. Reason being, the Markets are expected to open on a quiet note and it has been displaying lack of conviction and participation while pulling back. This may keep the Markets a range movement with some intermittent downsides as well. Today, post quiet opening, the intraday trajectory that it forms and the levels of yesterday’s low would be important to watch out for.

The RSI—Relative Strength Index on the Daily Chart is 37.6376 and it remains neutral as it shows no bullish or bearish divergence or any failure swings. The Daily MACD continues to remain bearish as it trades below its signal line.

On the derivative front, the NIFTY November futures have further shed over 1.56 lakh shares or 0.91% in Open Interest. The NIFTY PCR stands a t0.72 as against 0.71 levels. The reduction of Open Interest conveys one fact that there is clear discomfort in the Markets at the levels of 7750-7800 zones as it gets nearly oversold by then. However,  it also points out to a fact that the OI drops with any upside and this also shows that though the Markets are supported by short covering at the lower levels, it certainly lacks the conviction of a fresh buying.

Coming to pattern analysis, the Markets have so far held the pattern support levels of 7680 as it has attempted a rebound / pullback from 7714 levels. However, as mentioned above, the technical pullbacks have seen lower volumes and also a reduction in OI. This keeps the Markets little vulnerable to some more range bound movements and some intermitted selling bouts. However, so long as the Markets rule above 7680 levels, there wont be any significant downward breach in the Markets.

Overall, though the Markets have been little less strong that what it should have been otherwise during a technical pullback, it has not displayed any structural technical breach on the Charts. However, given the lack of conviction on the upside, we continue to reiterate to restrict fresh buying only to selected stocks and keep high vigil over existing profits, if any. Cautious outlook is advised for today. 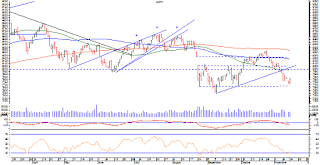 MARKET TREND FOR TUESDAY, NOVEMBER 17, 2015
After attempting to form a base yesterday after being nearly oversold, the Markets are set to open once again on a positive note and look for directions. Though somewhat modestly positive opening is expected, the Markets are not completely out of the woods and have not confirmed any reversal. However, given the technical structure of the Charts, some technical relief rally is expected to continue to a modest extent.

The RSI—Relative Strength Index on the Daily Chart is 34.6331 and it remains neutral as it shows no bullish or bearish divergence or any failure swings. The Daily MACD still continues to remain bearish as it trades below its signal line.

On derivative front, the NIFTY November futures have shed over 3.98 lakh shares or 2.27% in Open Interest. This makes fairly evident the fact that the yesterday’s rise has been primarily on account of short covering in the Markets. The NIFTY PCR stands at 0.72 as against 0.71 yesterday.

While having a look at pattern analysis, the Markets nearly approached its important pattern support levels of 7680 while it formed its intraday low of 7714 yesterday. So far, the Markets have maintained support at the vicinity of this level. Short covering saw the Markets giving a modest relief rally yesterday while holding on this support. Technical structure and the lead indicators on the Daily Chart suggest continuation of such modest technical pullback in immediate short term. However, it is important to note that the Markets have not formed / confirmed any reversal and it awaits structural confirmation for any reversal even if it continues with its up move. In event of any downsides in immediate future, the levels of 7680 would be of critical importance.