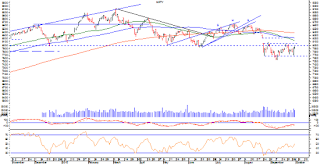 The RSI—Relative Strength Index on the Daily Chart is 50.7506 and it has reached its highest value in last 14-days which is bullish. Also, the RSI has formed a fresh 14-period high but NIFTY has not yet and this is Bullish Divergence. The Daily MACD remains bullish as it trades above its signal line.

On the derivative front, the NIFTY October futures have shed over 1.71 lakh shares or 0.91% in Open Interest. Individually speaking, this figure is insignificant but it has certainly shown some amount of short covering involved in the trade yesterday.

While looking at patterns, pattern analysis makes it evident that the Markets still continue to remain in a broad trading range and have currently closed below its key resistance levels as of yesterday. The Markets face formidable multiple resistances ahead in terms of the breach supports on its way down and the Gap that it created couple of weeks back. All these will act as major pattern resistances on its way up. The Markets are likely to face serious resistance at 8000-8060 levels. It will have to move past these levels and attempt to fill up the gap that it had created. In nutshell, though the Markets have shown decent up moves it still remains much in the woods and it requires up moves with conviction and volumes to move  past its key pattern resistances.

All and all, it is pretty evident that we are set to see a decently positive opening but at the same time also acknowledge the fact that the Markets will trade very near to its important and multiple pattern resistances. This will continue to keep the Markets vulnerable to seeing profit taking at higher levels.  Also when today is the last working day of the Week once again, we can see some consolidation at higher levels. It is strongly advised to use any available up moves to book and protect profits at higher levels while continuing to keep purchases at moderate levels. 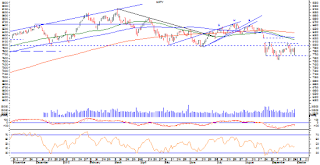 MARKET TREND FOR WEDNESDAY, SEPTEMBER 30, 2015
The Markets have remained in a broad trading range after taking support near the prescribed pattern supports. Today, we can see the Markets opening on a modestly positive note and look for directions. They way the Markets have not breached its support levels, on the same lines; they are not completely out of the woods as well. They continue to remain in a broad trading range while still continuing to trade below its key resistance zone.

The RSI—Relative Strength Index on the Daily Chart is 45.4254 and it remains neutral as it shows no bullish or bearish divergence or any failure swings. The Daily MACD still continues to remain bullish as it trades above its signal line.

On the derivative front, the NIFTY October series have added over 2.25 lakh shares or 1.21% in Open Interest. The NIFTY PCR stands at 0.91 as against 0.90 yesterday. Some fresh shorts have been added as the Markets have reported net increase in Open Interest after coming off nearly 100-odd odd points from the high point of the day.

Coming to pattern analysis, the Markets have continued to remain in a broad trading range after yesterday’s pullback from lower levels. The pattern support of 7650-7670 level still hold good for the Markets. However, on the upside, the Markets continue to face resistance near its key resistance zone of 7960-8000 levels. The Markets have not been able to move past this zone after breaking it on the downside. Currently it continues to trade in a very broad trading range. The overall trend in the Markets remains sideways and due its  is broad trend, some good amount of volatility have continue to remain ingrained in it.

Overall, it is pretty clear from the technical charts that the Markets have failed to form any directional bias. It still continues to trade with uncertain bias and remains in a broad trading range. The key resistance zone of 7960-8000 levels still hold good for the Markets. There will be no sustainable up move until the Markets moves past this level. However, with the trading range remaining quite broad, the Markets too will witness some good amount of volatility as well. It is advised to continue to remain very modest on exposures and maintain liquidity in the Markets. 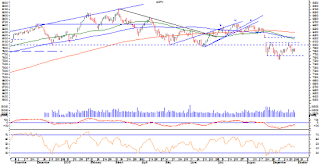 MARKET TREND FOR TUESDAY, SEPTEMBER 29, 2015
Markets are poised at a very critical juncture today. Global set up remains and we are likely to open on a gap down opening today again as well. However, the Markets are likely to see openings around the important pattern support at 7660-7675 zone and the behaviour of the Markets vis-à-vis this level would be extremely important to watch out for. There are chances that the Markets remain sideways in the morning trade and then react to the RBI Credit Policy review wherein the 0.25% cut remains discounted for.

The RSI—Relative Strength Index on the Daily Chart is 42.8384 and this remains neutral as it shows no bullish or bearish divergence or any failure swings. The Daily MACD continues to remain bullish as it trades above its signal line.

On the derivative front, the NIFTY October futures have added over 2.30 lakh shares or 1.26% in Open Interest. This signifies creation of fresh shorts of modest quantities in the index futures. The NIFTY PCR stands at 0.90 as against 0.93.

Coming to pattern analysis, the Markets have failed to clear the 7960-8000 resistance zone. This was the support that it broke further following the breakaway gaps on the downside in the first week of September. Since then, the Markets have failed to clear these levels and continue to trade below that with uncertain bearish bias. Having said that, the Markets have a downside pattern support of 7650-7670 levels. Today’s imminent gap down opening is likely to see the Markets trade near those supports. After such imminent gap down opening, the Markets are expected to trade sideways until it reacts to RBI Credit Policy review. If the Markets breach this support zone of 7650-7670, it will get weaker in coming days but the intraday behaviour of the Markets vis-à-vis this level will be important to watch out for.

Overall, some chances of the Markets improving in the second half of the session cannot be completely ruled out for. But some amount of uncertainty will continue to persist. It is advised to refrain from shorts until the Markets breach its pattern support. While remaining completely light and moderate on positions, conservation of cash is advised for today. 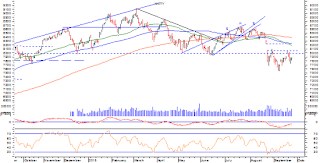 On the derivative front, the NIFTY October series have added over 38.55 lakh shares or 26.56% in Open Interest. The Thursday’s up move has been largely on account of short covering and the overall rollovers have been slightly below average of past six months but in line with last three months. NIFTY PCR stands at 0.93 as against 0.95.

Coming to pattern analysis, we once again come to the major support zone of 7960-8000 levels that the Markets broke on the downside after forming a bearish breakaway gap in the first week of September. The Markets have not been able to fill up those gaps and that area continues to act as major resistance while it moves up. Before that, it will also face resistance in 7960-8000 levels as well. These were the major triple support pattern support that the Markets broke on the downside. These levels, i.e. 7960-8000 will continue to pose resistance as well. Until the Markets moves past these levels, it will continue to remain vulnerable to selling pressure from higher levels.

Overall, the Markets will continue to remain in a broad trading range with the zone of 7960-8000 levels continuing to act as a resistance. Until the Markets remain below these levels, we will continue to see the Markets also remain vulnerable to selling bouts from higher levels. Keeping this in view, we continue to reiterate very cautious stand on the Markets. While avoiding shorts, dips should be used to make fresh purchases but in moderate quantities and maintain a selective approach.