MARKET TREND FOR FRIDAY, MAY 20, 2016
The Markets have given a downside breakout yesterday from the symmetrical triangle formation precisely on the expected lines. Today, the Markets may see a quiet opening today but the upsides are likely to remain capped as the levels of 200-DMA which is 7801 today is likely to act as resistance as the Markets have breached it on the downside yesterday. The intraday trajectory would be critical to watch out for but as of now, every bounce is all likely to get sold into. 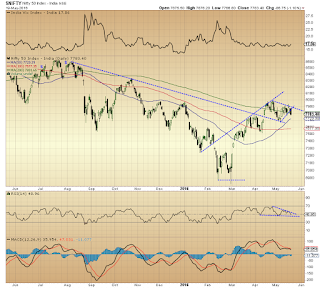 The RSI—Relative Strength Index on the Daily Chart stand at 48.95 and it does not show any failure swing. It shows a bullish divergence as it has not formed a fresh low even when NIFTY reported a fresh 14-week low. The RSI stays within its formation and has not reported a lower low.

On the derivative front, the NIFTY May futures have added over 4.07 lakh shares or 2.53% in Open Interest.

Coming to pattern analysis, we had mentioned in our yesterday’s edition that the more the Markets move towards its apex, more are the chances that we witness a downward breakout. It happened precisely that way but in case of breakout on either side, the intensity is likely to be relatively less. The Markets have breached the support of 200-DMA but continues to stay within its filter. Next logical support for the Markets rests at 50-DMA, which is 7720. It is very much likely that the Markets once again consolidates in a given range before taking a larger directional bias but in any case the levels of 7970-7990 has established themselves as a sacrosanct resistance for the markets in the immediate short term. There would be a bearish under tone at an intensified level if the Markets also breach the 50-DMA. Until then, range bound consolidation cannot be ruled out.

Overall, the Markets will see a quiet opening it is also likely that it sees a volatile movement on either side. We continue to reiterate the strategy of avoiding shorts, and making purchase on a very moderate note in very select defensives until the directional bias is established. It would be equally important to keep protecting profits at higher levels.

MARKET TREND FOR THURSDAY, MAY 19, 2016
Markets continued to consolidate and continued to seek support at its 200-DMA and managed to keep its head above it yesterday. Today, the Markets are likely to see a negative opening once again and the analysis would continue to remain once again on similar lines like yesterday. The Markets continue to remain in symmetrical triangle formation and moving towards its apex and this is likely to see either trading range remaining extremely capped or Markets finally taking a directional call for the immediate short term. 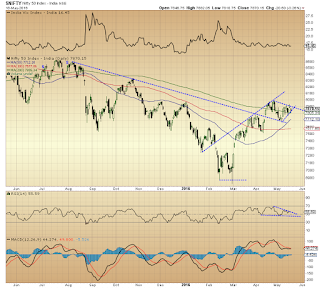 The RSI—Relative Strength Index on the Daily Chart is 55.59 and it remains neutral as it shows no bullish or bearish divergence. The Daily MACD stays bearish as it trades below its signal line.

On the derivative front, the NIFTY May futures have shed yet another 5.12 lakh shares or 3.09% in Open Interest. The NIFTY PCR stands at 0.99 as against 0.96 yesterday.

Coming to pattern analysis, the Markets have continued to remain in symmetrical triangle formation. Further to this, it is under this formation for quite a time now and has moved more towards apex. Usually, if a breakout on either side is not achieve around 75% distance from apex, the intensity or effectiveness of the breakout reduces by nearly a high and this has adverse effects, especially on the upside breakouts. Having said this, the RSI too remains under such formation and has not formed a higher high as well. Overall, there are chances that the Markets may see some short term weakness coming in. In any case, the upside will continue to face stiff resistance around 7970-7990 zones.

Overall, the Markets will have to watch itself vis-à-vis the levels of 200-DMA which stands at 7805 today. Any breach below this will see some more weakness creeping in. It is also important to note that the Markets are overdue to take a directional call and volatility on either side cannot be ruled out. While continuing to keep analysis on yesterday’s line, making moderate purchases while vigilantly guarding profits at higher levels is advised for today.

MARKET TREND FOR WEDNESDAY, MAY 18, 2016
Markets are likely to see a modestly negative opening once again and look for directions. The fact that the Markets continue to remain in the symmetrical triangle formation keep the analysis for today once again on similar lines that of yesterday. On the upside, the Markets continue to face stiff pattern resistance in the 7970-7990 zones and on the downside, its behavior vis-à-vis the levels of 200-DMA will be critical to watch out for. 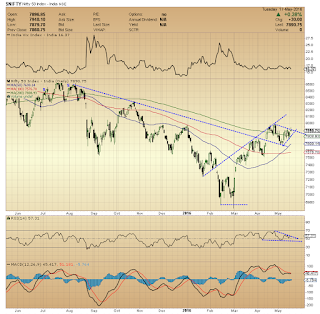 The RSI—Relative Strength Index on the Daily Chart is 57.31 and it remains neutral as it shows no bullish or bearish divergence or failure swing. The Daily MACD stays bearish as it trades below its signal line.

On the derivative front, the NIFTY May futures have added over 4.05 lakh shares or 2.50% in Open Interest. The NIFTY PCR stands at 0.96 as against 0.92 yesterday.

Coming to pattern analysis, the Markets continue to remain in a stiff range while forming a symmetrical triangle on the Daily Charts. The movement of the Markets has narrowed wit it facing stiff resistance in the 7800-7950 zones and the levels of 200-DMA which is 7808 today has been acting as support for the Markets. Though the Markets currently lacks a clear directional bias, the upsides will remain capped at 7970-7990 zones as these level offer very stiff pattern resistance for the Markets. On the downside, any breach below the 200-DMA will see the Markets getting weaker in the immediate short term.

Overall, even if the medium term view of the Markets may remain bullish, the Markets lack directional bias in the immediate short term. It is important to note that no sustainable up moves shall occur until the Markets comprehensively move past 7970-7990 resistance zones. Until this happens we continue to reiterate to use every up move to book and protect existing profits.

MARKET TREND FOR TUESDAY, MAY 17, 2016
The Markets have remained within their pattern formation and the levels of 200-DMA continued to act as support. Today, once again, the analysis continues to remain on similar lines. The Market is expected to open on a modestly positive note and look for directions. However, the opening will have the Markets remain within the symmetrical triangle formation and the rise may be met with resistance at higher levels and the zones of 7970-7990 will continue to act as major pattern resistance for the Markets. 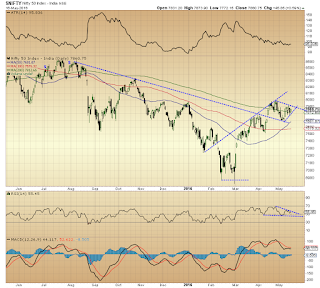 The RSI—Relative Strength Index on the Daily Chart is 55.45 and this shows no failure swings. However, the RSI has not made a fresh 14-period and this is Bearish Divergence on the Daily Charts. The Daily MACD too continues to remain bearish as it trades below its signal line.

Coming to pattern analysis, though the Markets took support at its 200-DMA which stands at 7812 today and rose nearly 60-odd points from there, it still continues to remain well within the symmetrical triangle and has shown no break out until today. Even if its shows some breakout the zones of 7970-7990 will continue to pose formidable pattern resistance on the upside. Having said this, it becomes important to note that the symmetrical formation acts both as a continuation and a reversal pattern. Therefore, until the Markets show directional bias on either side, it is likely to continue to trade in a ranged manner.
However, the intraday trajectory and the behavior of the Markets vis-à-vis the levels of 200-DMA will be critical to watch out for.

All and all,  some sectoral and stock specific out-performance will continue, it is advised to utilize any up move that is seen to book and protect existing profits. Fresh positions on the long side should be initiated on extremely selective and cautious note. With no clear directional bias, shorts should be avoided. While maintaining moderate exposure, continuance of cautious outlook is advised for the day.

MARKET TREND FOR MONDAY, MAY 16, 2016
The Markets are poised at a critical juncture and the analysis for today continues to remain on similar lines that of Friday. The Markets are likely to see a quiet and modestly negative opening and would look for directions. The Markets have made a lower low after forming a intermediate top of 7970 levels and currently rest at its 200-DMA which is 7915.99 today. Any opening below this will have the levels of 200-DMA acting as resistance and it would  be critically important for the Markets to try and trade above its 200-DMA to continue to remain under consolidation and avoid any downward breach. 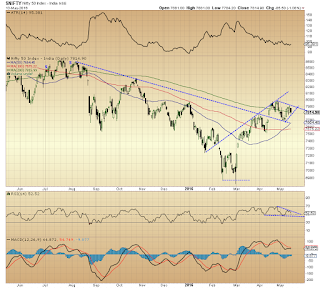 The RSI—Relative Strength Index on the Daily Chart is 52.52 and it remains neutral as it shows no bullish or bearish divergence or failure swings. The Daily MACD remains bearish as it trades below its signal line. On the Weekly Charts, the Weekly RSI is 52.59 and this too remains neutral without showing any bullish or bearish divergence. The Weekly MACD is bullish as it trades above its signal line.

On the derivative front, the NIFTY May futures have shed yet another 7.57 lakh shares or 4.44% in Open Interest. The NIFTY PCR stands at 0.88 today.

Coming to pattern analysis, after reversing its trend from the February lows, the Markets moved past all of its DMAs and formed its intermediate top in the zones of 7970-7990 levels. Having said this, since last couple of sessions, the Markets have formed a symmetrical triangle formation and this formation can act both as a continuation pattern as well as reversal in some cases. The RSI on Daily Charts too has reported a lower high and currently is within that formation. Having said this, it would be crucially important for the Markets to trade above 200-DMA which stands at 7815 today in order to avoid any weakness. On the Weekly Charts as well, the Markets have resisted to a falling trend line pattern resistance drawn form 8600-levels. Overall, in given circumstances, if the Markets see a downward breach it will also see itself breaching on the downside from this symmetrical triangle formation as well as 200-DMA and this will bring some more weakness in the Markets, at least in the immediate short term.

Overall, having said this, while watching the behavior of the Markets vis-à-vis the levels of 200-DMA, we reiterate a caution in the Markets once again and no major purchases should be made until the Markets sees a significant up move above 7950 levels. Until this happens we are likely to see all up moves getting sold into and in any case of downward breach, the levels of 7700-7650 cannot be ruled out. Maintaining liquidity along with cautious outlook is advised for today.