MARKET REPORT FOR FRIDAY, FEBRUARY 06, 2015
The Markets have remained dominated with volatile movement on either side and it is likely to remain this way for some more time. Expect a quiet opening in the Markets but the Markets are likely to trade with downside bias for some more time while it attempts to find a bottom through mild pullbacks which we can certainly expect. The level of 8830 will act as intermediate resistance in the immediate short term.

The levels of 8830 and 8875 will act as resistance and the level of 8640 will continue to act as immediate support for the Markets.

The RSI—Relative Strength Index on the Daily Chart is 57.6199 and it has reached its lowest value in last 14-days which is bearish. Further Bearish Divergence is also seen as the RSI has set a fresh 14-day low whereas the NIFTY has not yet done so. As we had mentioned in our yesterday’s edition of Daily Market Trend Guide, the Daily MACD has reported a negative crossover and now trade below its signal line and is now bearish.

On derivative front, the NIFTY February future have shed over 4.46 lakh shares or 1.77% in Open Interest. This signifies unwinding of long positions from higher levels.
Returning to pattern analysis, as we have often mentioned in our previous editions of Daily Market Trend Guide, that even if the Markets tests the levels of 8640, there will be no significant breach of any type on the  Daily Charts. However, there are chances that the Markets now attempts to find bottom and halts its corrective activity in the near term. However, volatility will continue to remain ingrained in the day to come.

The Markets are now trading near its short term, but important support levels of 8640. While it is likely that the Markets will test these levels, at the same time, it is also likely to show intermittent pullbacks as well. In view of this, it is advised to continue to adopt highly stock specific approach and also continue to keep exposures at moderate levels. 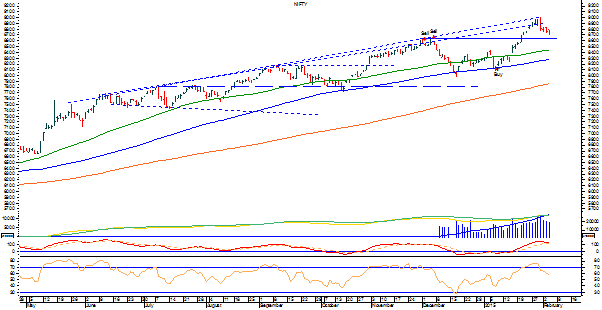 MARKET TREND FOR THURSDAY, FEBRUARY 05, 2015
Markets are likely to remain in consolidation mode in the immediate short term. With the opening expected on a quiet note, it is important to note that post breaking out on the upside from 8640 levels, the Markets have retraced over 73% of its gains. This makes it more likely to remain in some consolidation / corrective mode for some more time in immediate short term.

The levels of 8790 and 8840 will act as immediate resistance for the Markets. The level of 8640 is likely to act as its immediate and important support.

The RSI—Relative Strength Index on the Daily Chart is 58.5275 and it has reached its lowest value in last 14-days which is bearish. Further, it has also formed a fresh 14-period low whereas NIFTY has not yet and this is Bearish Divergence. The Daily MACD remains bullish trading above its signal line but is moving towards reporting a bearish crossover.

On the derivative front, the NIFTY February futures have shed over 1.15 lakh shares or 0.45% in Open Interest. Though this shedding is nominal, but it is enough to suggest that no major shorts seem to have been created in the system.

Coming to pattern analysis, as mentioned earlier, the Markets have retraced and corrected over 73% of its gains from the levels of 8640, the levels which from which it gave an upward breakout. The Markets may attempt to reverse from here but at the same time, even if it continues to retrace and tests 8640 levels, it would be perfectly fine on the  Daily Charts. Therefore, the levels of 8640 will be the important levels to watch out for in the immediate short term.

Overall,  as of now, the Markets are not showing an signs of a pullback and therefore we will continue with our analysis on more or less the same lines. We continue to reiterate to continue to maintain adequate liquidity and keep overall exposures at moderate levels. While maintaining vigil on existing profits, continuance of cautious approach is advised for the day. 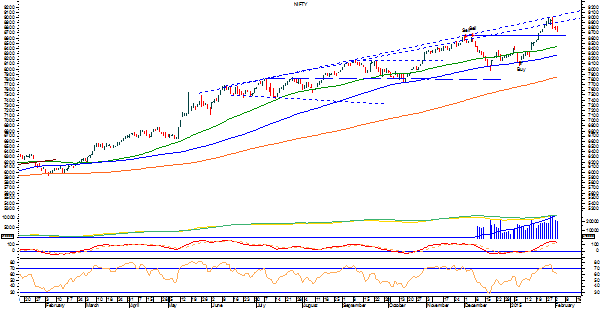 MARKET TREND FOR WEDNESDAY, FEBRUARY 04, 2015
Expect a quiet start to the Markets again as the RBI Policy review remained a non event on expected lines. Speaking on technical terms, we will continue to see the Markets remain in consolidation and in corrective mood. The levels of 8640 will continue to act as a good pattern support at Close levels in the immediate short term.

The levels of 8830 and 8895 will remain immediate resistance levels for the Markets. The support will come in much lower at 8640 levels.

The RSI—Relative Strength Index on the Daily Chart is 60.9686 and it remains neutral while showing no bullish or bearish divergences or failure swings. The Daily MACD  continues to remain bullish trading above its signal line.

On the derivative front, the NIFTY February futures have added over 4.26 lakh shares or 1.71% in Open Interest. This signifies that some amount of shorts seem to have been added in the system.

Coming to pattern analysis, as mentioned in our previous editions of Daily Market Trend Guide, the Markets are correcting after forming its immediate top. The Markets will remain in some corrective mode in the immediate short term but the pattern support at 8640 will act as important levels to watch out for.

Apart from technical structure which certainly remains mildly bearish, the outcomes of Delhi elections will also cast its effect on overall sentiments. Given this thing, overall primarily dominated with little bearish technicals, the Markets may see itself continuing to correct. In event of any up move, the Markets will continue to trade in a broad trading range. Secotoral out performance would continue. While maintaining enough liquidity, selective approach is advised for the day.

MARKET TREND FOR TUESDAY, FEBRUARY 03, 2015
The Markets have chosen to consolidate on Close levels. We can expect a quiet opening to the session and the Markets would react to the RBI Credit Policy review coming up. The opening trade is likely to see ranged movement but the  Markets would give some knee-jerk reactions to the RBI inputs. Though any immediate rate cut is discounted by the Markets but the any cut would trigger a positive surprise.

The RSI—Relative Strength Index on the Daily Chart is 64.0535 and it remains neutral without showing any bullish or bearish divergences or failure swings. The Daily MACD continues to remain bullish trading above its signal line.

On the derivative front, the NIFTY February futures have shed over 5.36 lakh shares or 2.10% in Open Interest. This very clearly suggests that the pullback that we saw in the previous session was purely on account of short covering from lower levels.

Coming to pattern analysis, as mentioned in earlier editions, the Markets have formed an immediate top of 8985 levels and have seen correction. It resisted to a rising trend line and in the process this rising trend line continues to remain an extended resistance for the Markets. Any up move, shall occur only after Markets moves past 8985-95 levels after a proper and fresh area pattern. Until this happens, we would continue to see a broad ranged consolidation in the Markets.

Overall, the Markets are going to remain volatile with some negative bias. Positive trigger would come in for the short term only with the RBI cutting rate again but this remains discounted to a much larger extent by the Markets as no cut is expected. Speaking purely on technical terms, the Markets would continue to consolidate with mild downward bias. It is continued to adopt a cautious outlook for the day.