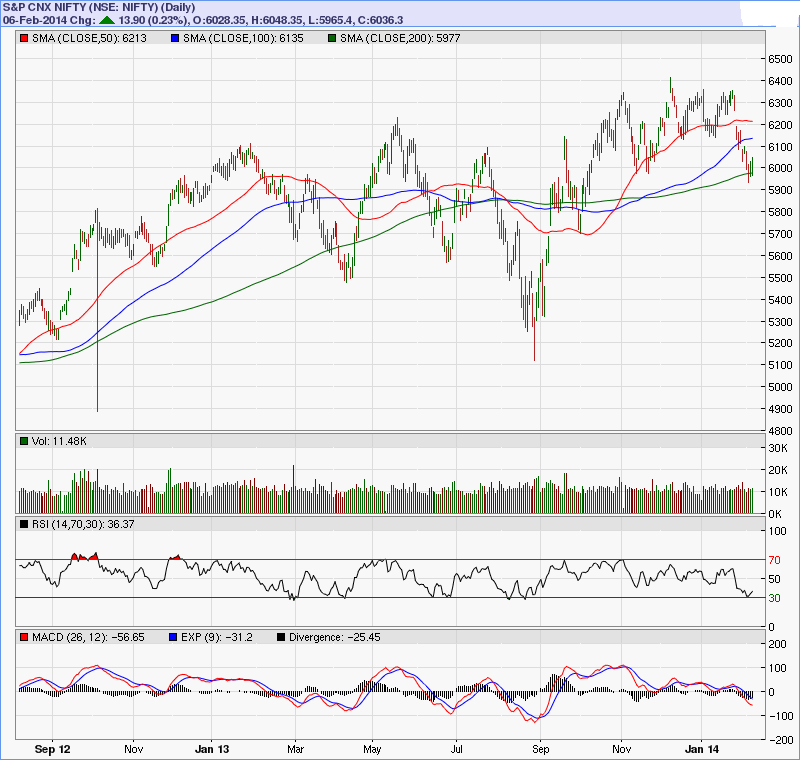 The Markets have taken support for three times in last three session and have successfully managed to keep its head above the levels of 200-DMA at Close. Today, expect the Markets to open on a decently positive  note and continue with its up move. The global cues are supportive as the US Markets too have ended in the green after a pullback post falling below its 200-DMA. The intraday trajectory would continue remain important.

The RSI—Relative Strength Index on the Daily Chart is 36.67 and it continues to remain neutral without showing any bullish or bearish divergence or failure swings. The Daily MACD remains bearish as it trades below its signal line.

On the derivative front, NIFTY February futures have shed 3.41 lakh shares or 2.08% in open interest. This shows some profit taking has been seen in the rise that we saw yesterday and the pullback may be because of short covering from lower levels. In either case, this signifies that a bottom has been attempted at the levels near the 200-DMA.It remains to be seen if we see fresh long positions getting built up after this. In any case, both FIIs and DIIs have remained net buyers in both derivative and cash segments yesterday.

Going by the pattern analysis, the Markets have attempted to find a bottom and reverse its trend. It is likely to continue with the advance today with a positive opening and might resist around its 100-DMA levels. It would consolidate around those levels again and only after that it can be confirmed that a trend reversal has happened if it moves beyond those critical resistance levels.

Overall, today, we are set to see a positive opening and the positive moves shall continue. The intraday trajectory would be important and the Markets will have to remain in rising trajectory in order to capitalize on the gains. Select buying can be done while protecting profits at higher levels. Overall, cautiously positive outlook is advised for today. 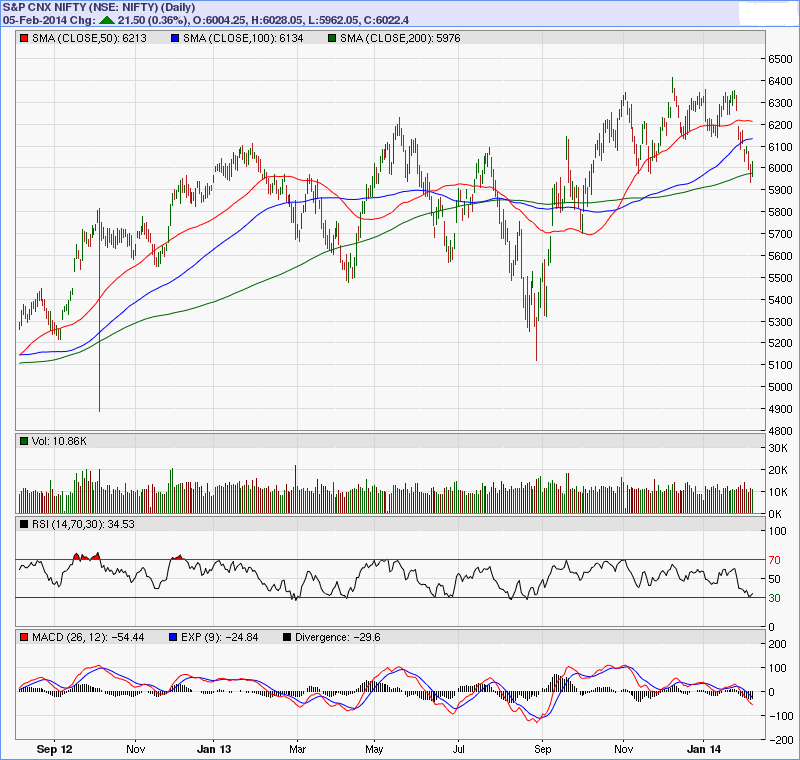 Today, expect the Markets to open on a flat to modestly positive note and look for directions. The Markets are expected to continue with its up move at least in the initial session. The Markets have held on to the support of 200-DMA at Close levels and are attempting a trend reversal. The intraday trajectory and the volumes would continue to play a critical role in this.

The levels of 6045 and 6080 would act as immediate resistance levels whereas the levels of 5976, the 200-DMA would continue to act as major support at Close levels.

The RSI—Relative Strength Index on the daily chart is 34.53 and it is neutral without showing a failure swings or any bullish or bearish divergences. The Daily MACD still remains bearish as it continues to trade below its signal line.

On the derivative front, the NIFTY February futures have added over 1.36 lakh shares or 0.84% in open interest. This signifies that exactly like day before, the rise in the Markets have seen some more fresh buying and not just short covering. This continues to remain a positive indicator. The NIFTY PCR stands at 1.11 as against 1.08.

Having said this, going by the pattern analysis, the Markets have held on to the support of 200DMA at Close levels. Any intraday dip below this level have seen recovery coming in. The Markets are attempting to reverse its trend. This attempt might see the Markets moving towards its 100-dma but it will require consistent higher top and higher bottom formations with volumes to successfully attempt a trend reversal.

All and all, we continue to advice to remain light on the positions and avoid aggressive positions. Any profits on either side should be protected and liquidity should be preserved. Very selective purchases may be made. Overall, very selective stock specific purpose with mild optimism is advised for today. 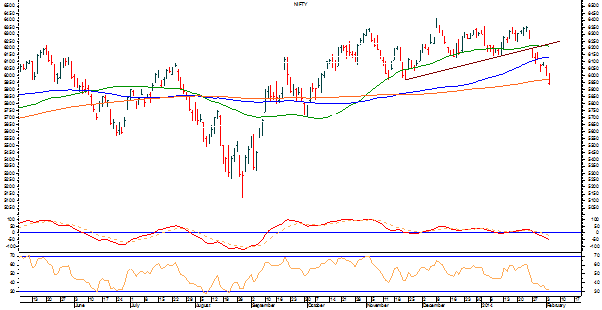 Today’s analysis continue to remain on the similar lines like yesterday. Today, we are expected to see a flat to mildly negative and quiet opening and the Markets are again likely to hover around its 200-DMA. It is likely that the Markets consolidate a bit and attempts to find bottom around this levels. The intraday trajectory and the behaviour vis-à-vis the levels of 200-DMA would continue to remain crucial.

The RSI—Relative Strength Index on the Daily Chart is 31.6784 and it has reached its lowest value in last 14-days which is bearish. It does not show any bullish or bearish divergences. The Daily MACD continues to trade below its signal line.

On the derivative front, the NIFTY February futures have added over 1.95 lakh shares or over 1.22% in open interest. This figure clearly shows that the rise of over 80-odd points that we saw yesterday from the lows of the day was just not merely on account of short covering. It has  seen some fresh buying as well which is clearly a positive indication.

All and all, we continue to reiterate the analysis reading given yesterday. The Markets are attempting hard to find a bottom and reverse the trend. It is advised to continue / begin making fresh purchases on a very selective note while maintaining adequate liquidity and protecting profits at higher levels. Overall, positive outlook with a tinge of caution is advised for today. 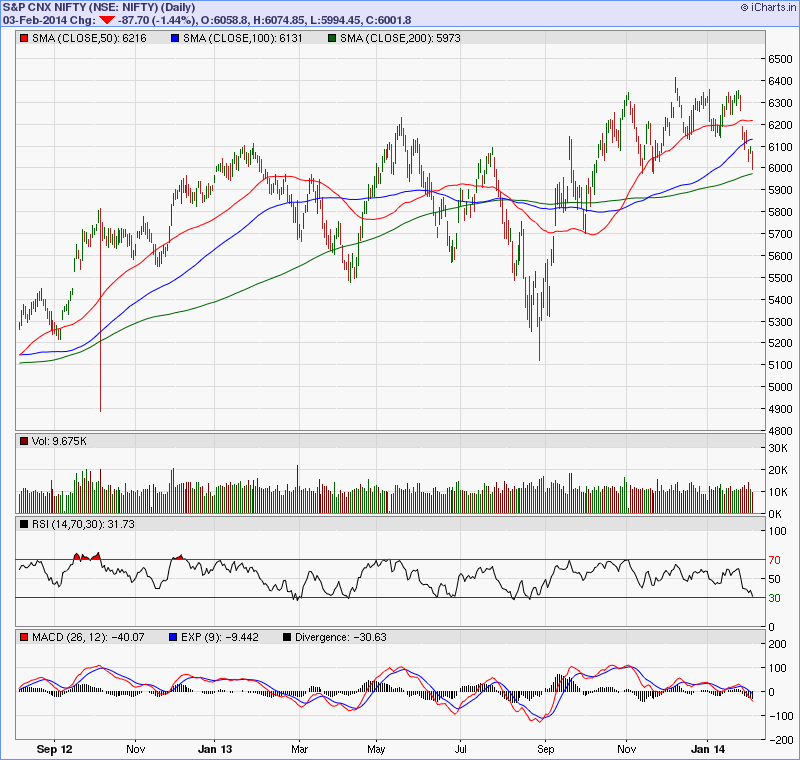 The RSI—Relative Strength Index on the Daily Chart is 31.7321 and it has reached its lowest value in last 14-days which is bearish. It does not show any bullish or bearish divergences. The Daily MACD continues to trade below its signal line.

On the derivative front, NIFTY February futures have shed over 1.72 lakh shares or just around 1.72% in Open Interest. This shows that some offloading has certainly been done, but the extent has remained limited and not brutal.

Having said all this, it is clear that the Markets will have a lower opening today and the levels of 200-DMA would get certainly tested. The only thing remains to be seen is the Markets would get immediate “oversold” and having tested 200-DMA while getting oversold will certainly create a favourable circumstance for the Markets to either show a strong resilience or show a sharp rebound sooner or later. So far as US Markets go, the Dow has declined over 1300 odd points from its all time high, has slipped below its 200-DMA and that too not stays “oversold”. The worst of the weakness in the US Markets seems to be nearly over.

All and all, given the above reading, it is advised to stay away from aggressive activities in the Markets. Shorting remains out of question at these levels but aggressive buying too should be avoided. It is advised to continue to make very select buying while preserving liquidity and positions as chances of improvement after a weaker opening just cannot be ruled out . 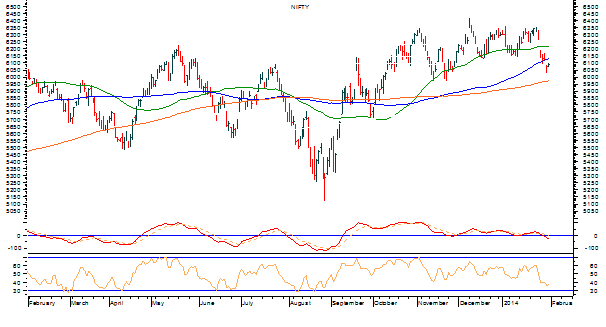 Expect the Markets to open on a modestly negative note again and look for directions. The consolidation in the Markets is likely to continue and the intraday trajectory that the Markets forms after opening would be crucial to decide the trend. The Markets will need up move with good volume participation to reverse its trend.

The RSI—Relative Strength Index on the Daily Chart is 37.4722 and it is neutral as it shows no bullish or bearish divergence or any kind of failure swings. The Daily MACD continues to remain bullish as it trades below its signal line. On the Weekly Charts, the RSI is 50.4384 and it has reached its lowest value in last 14-periods. The Weekly RSI has set a new low but NIFTY has not yet, and this is a minor bearish divergence on the Weekly Charts. The Weekly MACD remains bearish as it trades below its signal line.

On the derivative front, NIFTY February futures have added over 2.72 lakh shares or 1.71% in Open Interest. This signifies that the Markets have not seen any selling in the consolidating session that it witnessed on Friday.

All and all, the Markets still have not found the bottom successfully, though on Friday, it has attempted to do so. The Markets are likely to continue to see pressured movements in a given range until it moves past it 100-dma. Until this happens, we would continue to see direction-less movement and range bound trades in the Markets. We continue to advice to refrain from taking aggressive long positions. Liquidity should be maintained and profits should be protected at any levels. Cautious optimism is advised for today.