MARKET TREND FOR WEDNESDAY, JANUARY 25, 2017
The Indian Equities continued to display strength perfectly on the analyzed lines as the benchmark NIFTY50 resisted to 100-DMA zone in the first half of the session and then broke out on the upside while ending the day with decent gains of 84.30 points or 1%. We expect the up move to continue and expect the Markets to test the 8530-8550 zones wherein it can meet another major pattern resistance as indicated in the Chart. Today, we enter the expiry of the current derivative series and we expect some amount of volatility to remain as well. The session will remain dominated with rollover centric activity and some intermittent bouts from higher levels cannot be ruled out given the indications thrown by the lead indicators. 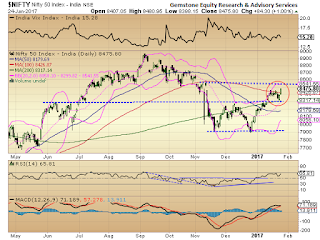 The Relative Strength Index – RSI on the Daily Chart is 65.8237 and it does not show any failure swings. However, the NIFTY has set a fresh 14-period high while the RSI has not and this has resulted into Bearish Divergence on this lead indicator. The Daily MACD remains bullish while continuing to trade above its signal line. On Candles, a strong white candle that has occurred signals potential continuation of up move.

While having a look at pattern analysis, it becomes clear that the NIFTY has attempted to move out of the broad trading range that it had formed. This trading range had resistance levels of 8430-8460 zones which also consist the 100-DMA of the NIFTY. The NIFTY deliberated in the previous session around 100-DMA and then it moved up further. We can expect the up move to continue and there are chances that the NIFTY tests 8530-8550 levels in short term.

MARKET TREND FOR TUESDAY, JANUARY 24, 2017
The Markets showed inherent buoyancy as it witnessed a classical intraday correction while it ended the day with modest gain of 42.15 points or 0.50%. Very much on projected lines, the zone at the 200-DMA which also converges with a major pattern support saw the benchmark NIFTY50 rebounding from there. Today, we expect a flat to modestly positive start to the Markets. Though positive trade is expected in the morning, the NIFTY is still likely to remain in a defined broad trading range with the zones of 100-DMA acting as immediate resistance. 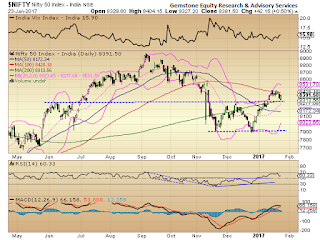 The Relative Strength Index – RSI on the Daily Chart is 60.3418 and it remains neutral. It does not show any failure swing or any kind of bullish or bearish divergence. The Daily MACD is bullish while it trades above the signal line. On Candles, a piercing line has occurred. This implies evident show of strength and usually implies shifting of momentum in the bullish hands.

Coming to pattern analysis, the NIFTY has kept itself in a broad trading range which exists between the area support and the 200-DMA levels on the lower side and the 100-DMA levels on the upper side. This has seen the formation of broad 150-odd points trading range and the NIFTY is expected to continue to oscillate between these two levels with a positive bias. As mentioned often, no runaway rise would occur unless the NIFTY moves past 8460 level and closes above it.

Overall, we enter the penultimate day of expiry of the current derivative series. The expiry being one day earlier and this being a truncated week, we may see some caution weighing in at higher levels. Also, the wider than normal Bollinger Bands on the  Daily Charts may keep the NIFTY in a broad trading range for some more time but the undercurrent continues to remain intact. We expect the volatility to remain and even increase as we approach the expiry. The softened US Bond Yields and the US Dollar Index may aid the Markets to remain stable with upward bias in the immediate short term. Overall, positive outlook for the Markets is advised for today.

MARKET TREND FOR MONDAY, JANUARY 23, 2017
The Markets on Friday saw its first corrective move after couple of days of narrow consolidation as it ended the day with a net loss of 85.75 points or 1.02%. The move remained on expected lines as the NIFTY50 continues to consolidate in a defined range. For today, we expect a mildly negative to stable start to the Markets. The levels of 200-DMA which stands at 8314 which also converges with one of the major pattern support as evident from the Daily Charts will be the important level to watch for. So long as the NIFTY trades above 8290-8320 zones, there will not be any structural breach on the Charts. The intraday trajectory that the NIFTY forms will dominate the trend.

The Relative Strength Index – RSI on the Daily Chart is 57.1507 and it does not diverge with the price and it remains neutral. The Daily MACD continues to remain bullish while trading above its signal line. On the Candles, a black candle occurred. It has occurred after resisting multiple times to the 100-DMA and therefore establishes credibility of this resistance level.

The pattern analysis represents a clearer picture. The NIFTY retraced from the 8440-8465 zones are resisting there for multiple times. The 100-DMA also remains present in that area resistance. The Friday’s decline has established the temporary credibility of that area resistance. It can be safely interpreted that the until the NIFTY moves past 8460-8480 zones, there will be no significant up move. Until this happens we are all likely to see the NIFTY50 oscillating in a broad trading range with the levels of 8290-8320 zones acting as very important pattern support area. It would be critically important for the NIFTY to trade above this zone in order to avoid any more weakness from creeping in.

Overall, we enter the expiry week of the current derivative series, we will see volatility remaining ingrained in the Markets. Moreover, we have a truncated week with the expiry happening one day earlier due to a public holiday. We had also mentioned that though the structure on the Weekly Chart remains intact, there are some divergent signals on the Daily Charts which may force NIFTY50 to remain under ranged consolidation. However, there is no structural dent on any Daily or Weekly Charts. Given this fact that undercurrent remains intact, dips should be continued to be utilized to make stock specific purchases so long as NIFTY trades above its 200-DMA.

WEEKLY MARKET OUTLOOK FOR JANUARY 23 THRU JANUARY 27, 2017
The ending of the benchmark NIFTY into negative on Friday’s session summed up the entire week on a relatively flat note. The NIFTY50 ended the week with a net loss of 51 points or 0.61%. It was the Friday’s session that took the entire week into negative territory. The coming week is crucial as we enter the expiry of the current derivative series. Also, the previous Week has seen the NIFTY moving beyond the 8250-8275 zones and this week has seen the NIFTY sustaining above these levels. The opening of the coming week is expected to be modestly negative but relatively stable. Markets will see some stability returning and the levels of 8270-8300 zones will act as crucial support in coming days. 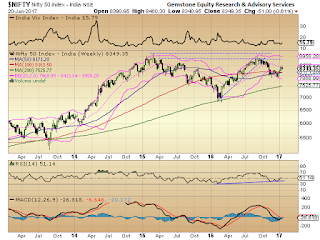 The coming week will find resistance  at 8420 and 8465 levels. The supports will exist at 8310 and 8270 levels. Any slip in the NIFTY levels below this will see some tempory weakness creeping in.

The Relative Strength Index – RSI on the Weekly Charts is 51.1492 and it does not show any failure swings. It does not show any bullish or bearish divergence either and therefore it remains neutral. The Weekly MACD is currently bearish and it is trading below its signal line. However, it is important to note that any consoldiation in the NIFTY or some up move will see this lead indicator reporting a positive crossover. No signficant formation is observed on Candles. An upper shadow is formed but it is not long enough to create any major potentially bearish situation.

Pattern analysis presents a simpler picture. NIFTY has seen a very distinct Double Top formation around 8968 levels on the Weekly Charts. After forming this evident formation, the NIFTY retraced but it has attempted to form a higher bottom by halting the retracement and attempting to move up from 7900-7920 zones. Post pullback of 500-odd points at Close levels, we are seeing the Markets consoldating in a broad 150-odd points range. It would be critically important for the Markets to sustain th e 8270-8300 zones as supports. Any dip below this will bring in some more temporary weakness in the immediate short term. The Bollinger Bands on the Weekly Charts are just 6.5% wider than normal. This reading singularly do not suggest any conclusive about the future movement but the wider-than-normal bands on the Daily Charts are likely to keep this week under consoldiation. Fresh sustainable up move shall occur only above 8460 levels.

All and all, other factor which is likely to play the spoil sport is are the rising US Bond yields. Volatility will remain  ingrained as we enter into expiry. The coming week is short as Thursday, January 26th remains a Republic Day holiday and the expiry happening a day earlier. There is no structural breach on the Charts and we therefore advise refraining from creating any major short positions. Sector churning is likely as few of the sectors are seen improving while some are distinctly losing momentum. While remaining moderate on the overall exposure, we advise cautious optimism in the coming Week. 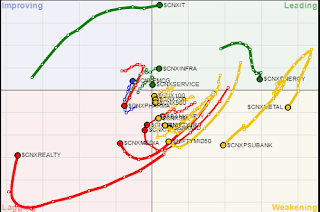 A study of Relative Rotation Graphs – RRG suggest bulk of the damage on IT stocks is done and they might exhibit strength and eventually attempt to outperform. This is with a caveat of possible headwinds of negative news flows from US, if any, which with see some knee jerk reactions. Otherwise, we may see distinct relative outperformance from CNXIT. The FMCG and CNXIFRA stocks are likely to see continued performance. CNXSERVICE may relatively outperform but may also take a breather. We will see REALTY stocks consolidating on week-on-week basis and attempting to improve. The broader markets will see some possible slowdown in momentum and this will be reflected in METALS and CNXMID100, CNXMID50 and NIFTYJR stocks. The PHARMA may remain selectively weaker and we can expect CNXAUTO stocks consolidating their performance and attempt to relatively outperform.