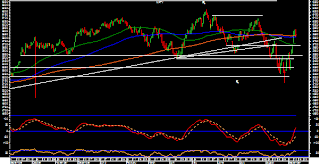 Today, expect the Markets to open on a modestly negative note and it is likely that the corrective activity continues at least in the initial session. The Markets have closed a notch above 200-DMA which is 5838.85 and any opening below this would cause further weakness in the Markets. The opening levels of the Markets and its behaviour vis-à-vis this 200-DMA and 100DMA levels would dictate the trend for today.

For today, the levels of 5880 and 5920 would act as immediate resistance levels for the Markets. The supports exists at 5802 and 5775 levels on the downside.

The lead indicators remain neutral. The RSI—Relative Strength Index on the Daily Chart is 59.9808 and it is neutral as it shows no bullish or bearish divergence or any kind of failure swings. The Daily MACD continues to trade above its signal line. On the Candles, An engulfing bearish line occurred (where a black candle's real body completely contains the previous white candle's real body).  The engulfing bearish pattern is bearish during an uptrend (which appears to be the case with NIFTY).  It then signifies that the momentum may be shifting from the bulls to the bears.

On the derivative front, NIFTY September futures has continue to shed 1.73 lakh shares or 0.91% in Open Interest. Though major offloading was not seen yesterday, but at the same time, no major shorts were seen being created as well.

Overall, if the Markets opens and drifts below the 200-DMA levels, it is likely that further weakness creeps in to it. It would be very necessary for the Markets to trade above the levels of 200-DMA in order to just consolidate and not weaken further. As mentioned earlier, the opening levels and the intraday trajectory it forms vis-à-vis the levels of 200-DMA would determine if the Markets are just consolidating or it is continuing to see some correction.

All and all, the final reading remains on similar lines like yesterday. No fresh long positions should be taken until the Markets moves past the levels of 5930-5935 and until this happens it is likely to see a range bound consolidation with greater chances of weakness if it drifts below 200-DMA. Until this directional trend gets clear, any profits should be vigilantly protected. Overall, continuance of cautious outlook is advised for today. 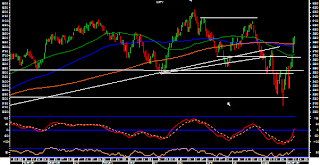 The Markets are likely to open again on modest gains but the analysis for today remains more or less on similar lines like yesterday. The Markets have risen over 600-odd points last week and there are very bright chances that we are set for correction from higher levels on account of profit taking. At least a consolidation cannot be ruled out. Intraday trajectory would remain crucial.

The lead indicators continue to remain in place. The RSI—Relative Strength Index on the Daily Chart is 63.1444 and it has reached its highest value in last 14-days which is bullish. It does not show any bullish or bearish divergence. The Daily MACD continues to trade above its signal line.

On the derivative front, NIFTY September futures have shed over 10.23 lakh shares or 5.08% in open interest. This is the first indication of tiredness in the Markets. This shows that Markets have got little weary    and fatigued and some range bound consolidation / minor correction cannot be ruled out.

Overall, the lead indicators continue to remain in place but the F&O data clear show some fatigue in the Markets at higher levels. Further to this, given the shedding of OI by over 5%, there are high chances that the Markets pares its opening gains and we see some correction setting in to the Markets. Possibilities of this cannot be ruled out and remain high.

All and all, we may see modestly positive opening but at the same time the chances of correction from higher levels or account of profit taking remains very high and cannot be ruled out. If not then consolidation like yesterday remain imminent and given this fact, we advice not to create fresh longs in aggressive manner while profits on open positions should be protected. Volatility shall remain and cautious outlook is advised for today. 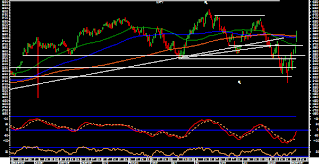 The Markets have risen nearly 800-odd points since the lows it made on 28th August , and nearly 600-odd points in straight 4-day rally. Given this reading, it is extremely likely that the Markets see some consolidation or minor profit taking from higher levels. Today, expect the Markets to open on a flat to mildly negative note and correct. Intraday trajectory would be important to determine if the Markets are consolidating or correcting.

Today, the levels of 5925 and 5940 are immediate resistance levels. The support exist in form of 200-DMA which the Markets moved past yesterday. Levels of 5835 and 5810 shall act as immediate supports.

The lead indicators continue to remain buoyant. The RSI—Relative Strength Index on the Daily Chart is 62.6642 and it has reached its highest value in last 14-days which is bullish. It does not show any bullish or bearish divergence. The Daily MACD continue to remain bullish as it trades above its signal line.

On the derivative front, the NIFTY September futures have added over 20.04 lakh shares in or over 11.28% in Open Interest. This is certainly a positive factor and shows that the rally that we saw yesterday was on account of pure buying and not just on short covering.

All and all, the trend in the Markets remain intact. The only fact of one way rise of over 600-odd points is something that can cause the Markets to either consolidate of correct a bit. Even if it consolidates, it shall keep the session volatile and volatility shall refuse to away. It is also likely that the Markets consolidates above its 100 and 200-DMA levels and spends a day or two in a capped range. Given this scenario, it is extremely important to protect long profits at higher levels while fresh purchases should be made very selectively. Cautious outlook is advised for today. 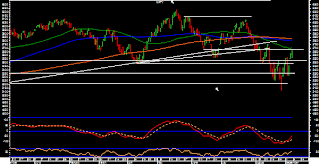 The Markets will open today after an extended weekend with the Monday being a trading holiday on account of Ganesh Chaturthi. Today, the Markets are likely to open on a positive note and continue with its up move. However, given the rise that we have seen in recent sessions and more importantly, the opening levels would bring the Markets near its 50-DMA, some consolidation at these levels post opening is likely.

For today, the levels of 5705 and 5720 are likely to act as immediate resistance levels on the Daily Charts. The supports exist lower at 5620 and 5590 levels.

The lead indicators continue to remain buoyant. The RSI—Relative Strength Index on the Daily Chart is 55.5735 and it has reached its highest value in last 14-days, which is bullish. It does not show any kind of divergence on the Daily Charts. The Daily MACD continues to trade above its signal line and is therefore bullish. On the Weekly Charts, the RSI is 47.3103 and it is neutral as it shows no negative divergence or any kind of failure swings. The Weekly MACD is bearish as it trades below its signal line.

On the derivative front, the NIFTY September futures have added over 3.08 lakh shares or 1.74% in Open Interest.

Given the above reading, the lead indicators and the F&O data remains steady and positive and this may cause the Markets to continue with its up move. However, we cannot rule out the fact that today’s opening and further possible up move shall take the Markets near its 50-DMA and some consolidation or minor profit taking from those levels cannot be ruled out.

All and all, today, intraday trajectory would continue to remain crucially important. It would be important to see if the Markets sustains the opening gains as some consolidation / minor profit taking cannot be ruled out. However, it is advised to strictly refrain from creating shorts but profits in long positions should be protected vigilantly. Overall, cautious optimism is advised for today.