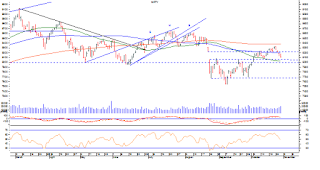 MARKET TREND FOR FRIDAY, OCTOBER 30, 2015
Markets have remained particularly dominated with rollovers, especially since last two sessions. Today, we can expect the Markets to open on a flat note and may trade in a range in the initial session. The Markets have slipped back into its broad consolidation zone of 8050-8220 and it would now be a while as the Markets will consolidate to attempt an up move again. In event of any weakness, the levels of 8050 would again become critical to watch out for.

The RSI—Relative Strength Index on the Daily Chart is 48.6514 and it has reached its lowest value in last 14-days which is bearish. The RSI has set a  fresh 14-period low where as NIFTY has not yet and this is Bearish Divergence. As expected in our yesterday’s edition, the Daily MACD has reported a negative crossover and it is now bearish as it trades below its signal line.

On the derivative front, the NIFTY and Market Wide rollovers have remained strong and above its last 3-series average. The NIFTY November series began adding Open Interest of 42.06 lakhs shares or 30.88% and has begun the series with NIFTY PCR at 0.86 as against 1.04.

Coming to pattern analysis, as we had mentioned in our previous edition of Daily Market Trend Guide, the Markets have slipped back into the trading range that it was previously in the month of October. This range is bit broad ranging nearly 170-odd points (8050-8220) and therefore, it can once again cause the Markets to move and oscillate within this range. In event of any weakness, it  would not be surprising if the Markets tests its lower bottoms but in the same breadth, it is very much unlikely that the Markets will see any significant downside breach in the immediate short term.

Overall, the Markets may remain subdued and range bound but is not likely to see any significant breach on the downsides. However, given the fact that the Markets are back into the broad trading range, some directionless oscillation within this range may not be ruled out. It is advised to continue to refrain from shorts and continue to utilize the dips to make modest quality purchases. 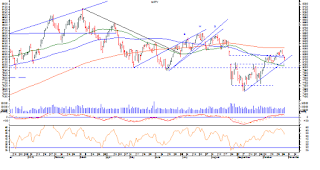 MARKET TREND FOR THURSDAY, OCTOBER 29, 2015
Markets are poised at a critical juncture as it slipped below its 100-DMA levels and has entered again in the broad consolidation zone that it had been trading in for the most part of the October month. Also, we can expect a modestly negative opening once again and the Markets are set to remain heavily dominated with rollover centric activities like yesterday as today is the expiry of the current series.

The RSI—Relative Strength Index on the Daily Chart is 56.0661 and it has reached its lowest value in last 14-days which is bearish. Also, a Bearish Divergence is spotted as the RSI has formed a fresh 14-period low whereas NIFTY has not yet.  The Daily MACD continues to trade bullish as it trades above its signal line. However, it is likely that it reports a negative crossover if the Markets continues to remain in corrective mode.

Coming to pattern analysis, the Markets had been in congestion zone between 8205 and 8280 levels in the previous week. This was after it cleared the broad rectangle formation wherein in consolidated in the broad range. The Markets had moved past its upper band of 8205-8230 range and it was expected to continue to move ahead. However, after the brief congestion, the Markets have slipped below the important pattern support of 8205, which also happens to be the 100-DMA of the Markets. Not only have the Markets slipped back into the broad consolidation zone, but the levels of 100-DMA will now pose resistance once again on it sway up.

Given this reading, and also given the fact that that today is the expiry day of the current series, some good amount of volatility cannot be ruled out today. There are fair chances that the Markets improve as we go ahead in the session post opening but at the same time, volatile oscillation like yesterday cannot just be ruled out. Keeping this in view, while continuing to refrain from shorts, purchases should be kept very limited and cautious outlook is advised for the Markets today. 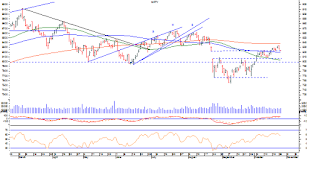 MARKET TREND FOR WEDNESDAY, OCTOBER 28, 2015
The Markets continues to consolidate and thus continues to keep the analysis once again on similar lines. Today, we are set to see a subdued opening in the Markets and we will also see the session remaining dominated with rollover centric activities as we enter the penultimate day of the current derivative series. The levels of 8230 and 8204, which is the 100-DMA of the Markets will be crucial to watch out for as any dip below this will send the Markets again in the broad consolidation range.

The RSI—Relative Strength Index on the Daily Chart is 58.1513 and it remains neutral as it shows no bullish or bearish divergence. The Daily MACD continues to remain bullish as it trades above its signal line. An on-neck-line occurrence on the Candles makes this day potentially bearish if yesterday’s low is penetrated.

While having a look at the pattern analysis, the Markets have their important pattern support at 8230 and further down at 8204 which is the 100-DMA of the Markets. The Markets will have to trade above these levels, at least 100-DMA, in order to keep its head above water. If the Markets are successful in maintaining itself above this, it would continue to consolidate in that congestion area. However, any breach below 8200 levels will see the Markets getting weaker for the immediate short term as it would send it again in the broad rectangle consolidation zone. Therefore, it would be imperative for the Markets to maintain itself above 8200 in order to avoid any further weakness. 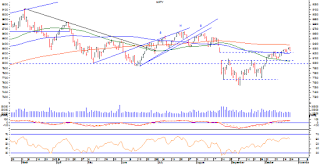 The RSI—Relative Strength Index on the Daily Chart is 60.5664 and it remains neutral as it shows no bullish or bearish divergence or any failure swing. The Daily MACD remains bullish as it continues to trade above its signal line.

While having a look at pattern analysis, the Markets have been consolidating between 100-DMA and its 200-DMA after having filled up the gap that it created in the first week of September. While doing so, it has moved past its two pattern resistance levels as well, the second on being the 8230-8240 level. Having said this, it would be important for the Markets to maintain itself above 8230-8200 levels as any breach below this will take itself once again in the broad trading range which can also cause it to consolidate for some more time. Because of this, with the Markets set to open around its immediate support levels, the intraday trajectory would be important to watch out for.

After a careful look at the technical charts, and the lead indicators, as of today it is clear that the Markets have not shown any signs of evident weakness. However, at the same time, it is very much likely that it consolidates for some more time to come. Given this scenario, we continue with our cautiously positive outlook on the Markets. While refraining completely from shorts, dips should be utilized to make moderate quality purchases.