MARKET TREND FOR FRIDAY AUGUST 26, 2016
The Markets witnesses a selloff in the second half of the session and failed to capitalize on its positive opening while ended the day with losses. Yesterday’s negative close keeps the Markets within the congestion zone that it has been trading in past couple of sessions. Today, we once again expect the Markets to open on a flat to mildly positive note and look for directions. Overall, it is likely to remain range bound and is likely to trade in the sideways congestion zone while the levels of 8500-8480 acting as critical supports on the downside. 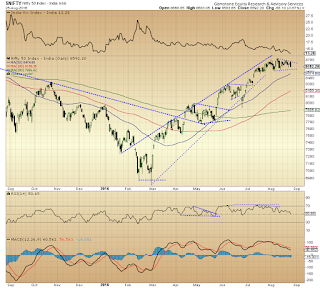 The RSI—Relative Strength Index on the Daily Chart is 50.6502 and it has reached its lowest value in last 14-days which is bearish. The RSI has set a fresh 14-period low while NIFTY has not yet and this shows Bearish Divergence. The Daily MACD stays bearish while trading below its signal line. On the Candles, following two long lower shadows / hammer-like  an  engulfing bearish pattern. Such patterns are more effective and preferable after a downtrend to mark a potential reversal. But in case of NIFTY this has appeared in a congestion and during a sideways movement. However, this still throws some potential possibility of up move but in any case this needs confirmation.

On the derivative front, the NIFTY September series has begin with net addition in Open Interest. The NIFTY PCR stands more favorably at 0.88 as against 1.04.

Coming to pattern analysis, as mentioned in our yesterday’s edition, Markets stood the chances of breaking free out of the congestion zone and attempt to more towards its previous high had it capitalized on the positive opening that it got. Instead, the Markets came off nearly 80-odd points from the high point of the day and continued to remain within the congestion zone. The Markets have been witnessing sideways consolidation over past couple of days. In event of any downsides, the levels of 8500-8480 are likely to act as sacrosanct supports. In event of up move, the levels of 8700-8728 will post stiff resistance to the Markets before any sustainable up move occurs.

Keeping in view the sideways range bound movement; we continue to remain in line with the analysis carried out over past couple of days. The undercurrent continues to remain buoyant and the structures on the overall charts continue to remain intact. While avoiding major shorts, all dips should be continued to be utilized to make selective purchases. While profits still needs to be protected at higher levels, cautious optimism is advised for today.

MARKET TREND FOR THURSDAY, AUGUST 25, 2016
While consolidating over previous week, the Markets have continued to display good amount of inherent strength and it ended the day once again on a positive note after recovering from the low point of the day. Today, we enter the expiry of the current derivative series and the Markets poise themselves at a critical point so far as current congestion zone is concerned. We expect the Markets to open on a modestly positive note and look for directions in the initial trade. If the Markets are able to sustain its expected opening gains, then we may see the Markets attempting to move out from the congestion zone. 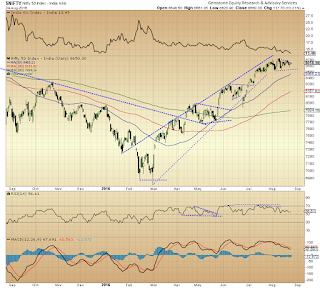 The RSI—Relative Strength Index on the Daily Chart is 56.6102 and it remains neutral as it shows no bullish or bearish divergence or any failure swings. The Daily MACD stays bearish as it continues to trade below its signal line. On the Candles,  a Doji Star  and  a long lower shadow  occurred. Though it requires confirmation, it certainly has a potential to halt the decline and create some possibility for a up move. However, as just mentioned, this requires confirmation.

On the derivative front, heavy rollovers continued as the NIFTY August futures shed over 30.56 lakh or 24.75% in Open Interest whereas the September futures added over 29.80 lakh shares in Open Interest. The NIFTY PCR stands at 1.04 as against 0.99 yesterday.

Coming to pattern analysis, the Markets have spent the enter week trading sideways in a range bound trajectory after the up move was halted at 8728 levels which act as immediate top for the Markets. As mentioned often in our previous editions, no sustainable up move shall occur until the Markets moves past the 8700-8730 resistance levels. Having said this, we have also been mentioning that the corrective activity of the Markets will remain in the form of limited downsides, intermittent selling bouts and a sideways range bound movement. Markets have traded very much on these analyzed lines.

Today’s expected positive opening is likely to see the Markets trying to move more towards
its immediate resistance levels and subsequently move beyond that in coming days. However, the expiry is also likely to keep some good amount of volatility ingrained in the Markets. While avoiding shorts, we continue to reiterate our view to continue to make modest selective purchases while vigilantly protecting profits at higher levels.

MARKET TREND FOR WEDNESDAY, AUGUST 24, 2016
Markets continued to severely consolidate and ended on a flat note with a minor gain after recovering nearly 50-odd points from the low point of the day. Today, we again expect the Markets to open on a modestly negative note and look for directions. It is once again expected to continue to consolidate and therefore it once again keeps the analysis for today on similar lines that of yesterday. Today we enter the penultimate day of expiry of current series and we will see the session remaining dominated with rollover centric activities. 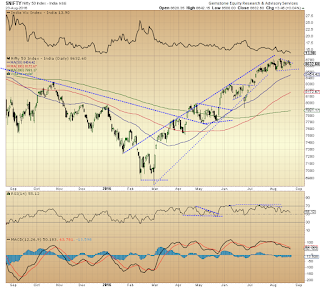 The RSI—Relative Strength Index on the Daily Chart is 55.1161 and it continues to remain neutral as it shows no bullish or bearish divergence or any failure swings. The Daily MACD remains bearish as it trades below its signal line. On the Candles, a long lower shadow has occurred. Though it has occurred in an uptrend, it has more significance if it had occurred during a downtrend. However, we may see some losses getting arrested for a while but this is only subject to confirmation today.

Coming to pattern analysis, the Markets have turned sideways after forming a intermediate top at 8728 levels. This has occurred after the Markets remained in upward rising channel drawn from February lows. However, as mentioned, this corrective state has resulted in a sideways range bound movement for the Market while witnessing intermediate selling bouts and has not resulted in to any major downsides. Overall, if we read the F&O data along with the lead indicators, Markets will continue to remain in such ranged movements but the downsides will continue to remain limited.

Overall, with the expiry underway for today and tomorrow, we will see the session remain dominated with rollover centric activity. We continue to reiterate our recent view to avoid any major shorts in the Markets and continue to utilize dips to make fresh purchase as stock specific performance will continue. Overall, positive but cautious outlook is advised for today.

MARKET TREND FOR TUESDAY, AUGUST 3, 2016
The Markets continued to correct yesterday much on expected lines while it ended the day with modest losses while making a lower high for itself. Today, we expect the Markets to continue to remain in corrective mode and also continue to consolidate while the mentioned levels will continue to act as immediate resistance for the Markets. While there is no structural breach on the Daily Charts, we expect the Markets to open flat with a slight negative bias and look for directions. 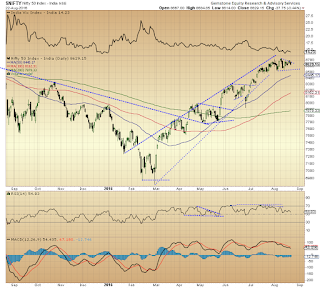 The RSI—Relative Strength Index on the Daily Chart is 54.8347 and it remains neutral as it shows no bullish or bearish divergence or any failure swings. The Daily MACD stays bearish as it trades below its signal line.

Coming to pattern analysis, after forming an immediate top at the levels of 8728, the Markets have now turned sideways and have remained in consolidation stage for couple days now. Though the Markets have shown no structural damage or any major decline, the fatigue has once again become visible on the Charts. There will be no significant sustainable up move unless the Markets moves past the 8700-8728 resistance / congestion zone. However, at the same time, with the overall structure and long term trend remaining buoyant, the corrective activities are expected to remain limited to intermittent selling bouts and sideways range bound movements.

Overall, given the overall structure of the Markets, no major downsides are expected but at the same time it is very much likely that the Markets remain in corrective mode. It is important to note that with the inherent buoyancy, we continue to reiterate our view to avoid any major shorting in the Markets. Also, some fresh shorts positions are visible and this may aid the Markets at lower levels. Overall, continuing to use the dips to make selective purchases is advised while maintaining a positive caution on the Markets.

MARKET TREND FOR MONDAY, AUGUST 22, 2016
The Markets continued to remain in consolidation mode and ended the day flat after a range bound move on Friday. Today as well, we are all likely to see the Markets remaining in consolidation mode once again. The Markets are likely to see a flat to mildly negative opening and likely to trade in a congestion zone created and the levels of 8700-8725 will continue to act as immediate resistance levels for the Markets. We also enter the expiry week of the current series and the Markets are likely to remain dominated with rollovers as well. 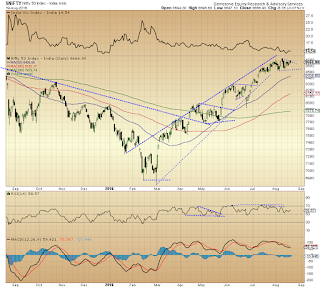 Overall, nothing changes much for the analysis like the previous week as the Markets continue to remain in congestion zone. With the Markets remaining inherently buoyant, we do not recommend any major positional shorts in the Markets. However, though there is evident need to protecting profits at higher levels all dips should be utilized to make selective purchases.