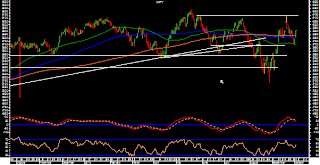 The RSI—Relative Strength Index on the Daily Chart is 56.5665 and it continues to remain neutral as it shows no bullish or bearish divergence or any kind of failure swing. The Daily MACD too continue to remain bearish as it trades below its signal line.

On the derivative front, NIFTY October futures have added over 10.09 lakh shares or 6.18% in Open Interest. This is certainly a positive indication as this indicates creation of fresh long positions in the Markets. This also very clearly suggests that the rally that we saw yesterday has not be due to mere short covering.

Given the above reading, and taking the lead indicators into account, the Markets are now preparing stage for a upward movement but before that, they are equally likely to consolidate around these levels. The Markets would see a decisive upward move once its moves past the levels of 5940. If it moves past this level, it can touch 6125 as well. However, before this happens, there are chances that the Markets consolidate with 200-DMA acting a support and keeping itself into a broad trading range.

All and all, from the reading above, it is advised not to attempt to create any short positions in the Markets. Even if the Markets consolidate, they would do so with a positive bias and even in time of consolidation or minor profit taking at higher levels, selective out performance would continue. Any consolidation or any profit taking should be used to make selective purchases. Profits too need to be protected at higher levels. Overall, cautiously positive outlook is advised for today. 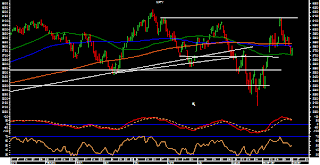 The Markets are expected to open on a flat to mildly positive note. The Markets are in a strong trading range as it took support on its 50-DMA in the previous session and today, it is likely to open around its 100-DMA or 200-DMA and this would act as resistance. Given this, the trajectory that the Markets form post opening would be critical to determine the trend for today.

The RSI—Relative Strength Index on the Daily Chart is 50.3135 and it is neutral as it shows no bullish or bearish divergence or any kind of failure swing. The Daily MACD continues to remain bearish as it trades above its signal line.

On the derivative front, the NIFTY October futures have shed over 5.58 lakh shares or 3.31% in Open Interest. This is little negative as it signifies that no fresh longs were added during the modest rally that we saw on Tuesday.

Given the above reading, it very clearly appears that the Markets are in a consolidation phase with little downward bias. This is conclusion is drawn, going by both , the pattern analysis and reading of F&O data. The Markets have taken support on its 50-DMA on Tuesday, but at the same time, even if it gets a positive opening, it will have to move past its 100 and 200-DMA which are in striking distance before it can continue with any decisive up move.  However, given the reduction in Open Interest seen on Tuesday, there are chances that even if we see a positive opening, some minor shedding of gains can be seen and some downside or a ranged session cannot be ruled out.

All and all, on this is for certain that the Markets have roadblocks ahead before it can continue with any decisive up move. It will have to move past its 500-DMA of 5840 before a sustainable up move occurs. Given this, it is likely that we continue to see the Markets in a trading range and also bit volatile. It is advised to avoid shorting in the Markets as there is no structural breach on the Charts as yet. At the same time, very selective purchases should be made while protecting profits vigilantly at higher levels. Overall, cautious optimism is advised for today. 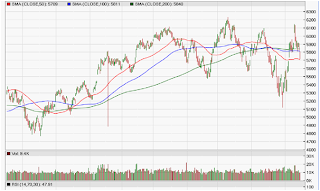 After paring of almost 200-odd points in two sessions, we are likely to see some respite from the weakness that the Markets are exhibiting and see some positive ticks today. Expect the Markets to open on a modestly positive note and look for directions.  The supports of 200DMA and the 100DMA that the Markets broke on the downside would act as resistance and this may kept he Markets range bound.

For today, the levels of 5810 and 5840 would act as immediate resistance on the Daily charts. The support exist at 5709, which is the 50-DMA for the Markets today. If the Markets breach this level on the downside, we will see some more weakness creeping in.

The RSI—Relative Strength Index on the Daily Chart is 47.91 and it has reached its lowest value in last 14-days which is bearish. The Daily MACD, as expected from last two days has reported a negative crossover and it now trades below its signal line which too is a bearish indicator.

On the derivative front, NIFTY October futures have went on to shed yet another 10.44 lakh shares or 5.82% in Open Interest. This is further clear indicator that there was a clear offloading of long positions and no shorts were seen being created.

Taking into account pattern analysis, we may see some support coming in near the 50-DMA levels but at the same time, it is likely that the Market may take only temporary support at these levels. This is because if F&O data is relied upon, it clearly indicates that some more downside is likely in the Markets.  We gave a truncated week as tomorrow is a trading holiday on account of Mahatma Gandhi Jayanti.

All and all, there are chances that the Markets may see positive opening today in the initial trade but the weakness might creep in at higher levels. Alternatively, it is also likely that the Markets remains in a capped range for some time before its takes further directional course. In both of these circumstances, we continue to advice to avoid shorts at these levels and use the downside in making selective purchases while vigilantly protecting any existing profits.  Caution with mild optimism is advised for today. 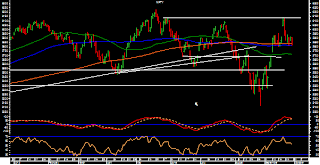 MARKET TREND FOR TODAY
The Markets have closed a notch below its 200-DMA. Today, it is likely to see a negative opening and this is likely to see the Markets opening well below its 200DMA and 100DMA and given this, these levels would become resistance for today. Intraday trajectory would be crucial to see if the Markets recovers after opening lows but otherwise, the charts suggests that the correction in the Markets would continue.
For today, the levels of 5841 and 5875 would act as immediate resistance levels for the Markets. The supports exist lower at 8790 and 5750 levels.
The RSI—Relative Strength Index on the Daily Chart is 53.1311 and it has just reached its lowest value in last 14-days which is bearish. It does not show any bullish or bearish divergence. The Daily MACD trades above its signal line but it is moving towards reporting a negative crossover. On the candles, An engulfing bearish line occurred (where a black candle's real body completely contains the previous white candle's real body).  The engulfing bearish pattern is bearish during an uptrend (which appears to be the case with NIFTY).  It then signifies that the momentum may be shifting from the bulls to the bears.
On the weekly charts, RSI is 51.5670 and it remains neutral with no failure swings or any divergences.  The Weekly MACD remains bullish as it trades above its signal line but this too is moving towards reporting a negative crossover.
On the derivative front, NIFTY October Futures have shed over 1.54 lakh shares or 0.85% in open positions. This signifies that there has been offloading of positions and no significant amounts of shorts have been added.
Given from all the readings above, i.e. taking the pattern analysis read along with F&O data and lead indicators, the Markets are more likely to see continuation of corrective actions in the Markets. The Markets are likely to see itself drop below 200DMA and 100DMA and it is likely that these levels act as resistance later on. The chances of the Markets testing the levels of 50-DMA which is 5713, cannot be ruled out if the weakness persists.
All and all, the Markets are set for negative opening today and given this, it is recommended to wait before initiating any fresh positions today. Unless the directional bias gets determined, shorts should be avoided. Selective purchases may be made as selective sectoral out performance would be clearly seen. Overall, continuation of modestly positive outlook without any over exposure in the Markets is advised for today.