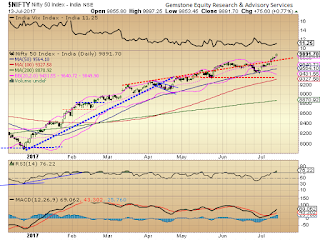 MARKET OUTLOOK FOR FRIDAY, JULY 14, 2017
Global positivity fueled by Federal Reserve’s Chair Janet Yellen’s comments coupled with favorable macro economic data pushed the buoyant Markets even higher as the benchmark NIFTY50 scaled yet another fresh high and ended the day with decent gain of 75.60 points or 0.77%. On Friday, a positive start yet again is expected. Despite the overbought nature of the Markets which certainly compels the participants to remain vigilant at these levels, buoyancy is likely to persist in the Markets going ahead.

The Relative Strength Index – RSI on the Daily Chart is 76.2165 and it has marked a fresh 14-week high which is bullish. However, it trades in overbought territory. The Daily MACD stays bullish while trading above its signal line. On Candles, a rising window occurred. This is essentially a gap which indicates buoyant uptrend to persist and continue.

Pattern breakout is seen as the Markets continue to chart in uncharted territory marking higher tops and higher bottom in a rising channel. It is approaching the measuring implications of the breakout that occurred from 8900-8950 levels but it still has some distance to travel.

The Markets are overbought and the lead indicators remain in overbought territory. This certainly warrants caution from the Market participants but it is much evident from the F&O data and the overall structure that the buoyancy is likely to persist. We reiterate to avoid shorts at any levels, remain stock specific and continue to protect profits at higher levels vigilantly while we chase the momentum. Markets continued to scale fresh highs amid tentative mood as the benchmark NIFTY ended yet another day with gains ending the day with rise of 30.05 points or 0.31%. We expect a positive opening on Thursday and we see that Markets will continue to attempt to move up on a very cautious note. We are likely to see global markets reacting positively to Yellen’s testimony wherein it was indicated that Fed would need to keep gradually raising its benchmark interest rate over next few years, but that rate won’t need to rise to levels seen in previous cycles. We see Indian Markets too receiving this positively.

The Relative Strength Index – RSI on the Daily Chart is 72.1126. Though it trades in overbought trajectory, it has continued to mark fresh 14-period high which is bullish. The Daily MACD stays bullish while trading above its signal line.

The pattern analysis show NIFTY moving past the resistance of a rising trend line successfully after a brief breach on the downside. This rising line will continue to act as support for the Markets in the immediate short term.

All and all, we are set to see a positive opening but at the same time, we cannot discard the fact that we need to continue to approach the Markets with caution given its overbought nature. We will see buoyancy being reflected in the session but it is recommended that the Markets should be approached with caution and each fresh purchase should be monitored in a very vigilant manner going ahead.

MARKET OUTLOOK FOR WEDNESDAY, JULY 12, 2017
In our previous note, we had cautioned about not getting carried away by the Monday’s up move as the NIFTY moved up more because of short covering than anything else. The signs of fatigue remained evident in Tuesday’s session as the Markets pared most of its gains after marking fresh life time highs. The benchmark NIFTY50 ended with minor gains of 15 points or 0.15%. We expect a quiet start to the Markets and see the Markets remaining in a capped range. Some shorts were seen added and we expect some consolidation to return to the Markets. 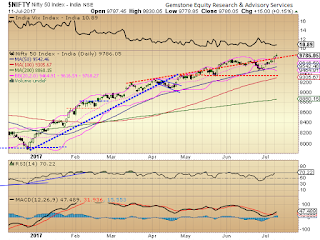 The Relative Strength Index – RSI on the Daily Chart is 70.2157 and it has marked a fresh lifetime high which is bullish. However, this trades mildly overbought. The Daily MACD stays bullish while trading above its signal line.

The pattern analysis shows Market successfully moving past the rising trend line drawn from 9200 levels. In event of any consolidation, this trend line is once again expected to act as support. 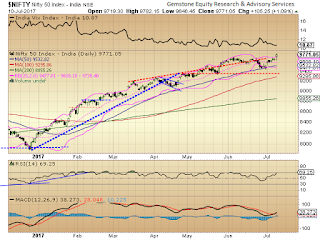 Markets had a very eventful session for Monday and NSE made headlines but all for the wrong reasons. Normal trading in the Cash segment remained halted for the first three hours of the day due to a technical glitch. Amid such chaos, the NIFTY went on to form fresh lifetime highs and ended the day with decent gains of 105.25 points or 1.09%. At this juncture, we wish to point out that the rise that we saw on Monday has been grossly due to short covering. Without disputing the underlying trend which remains absolutely intact, we recommend not getting carried away with Monday’s rise.

The Relative Strength Index – RSI on the Daily Chart is 69.2461 and it has reached its highest value in last 14-period which is bullish. No divergence is seen against the price. The Daily MACD stays bullish while trading above its signal line. A Candle with a long lower shadow occurred. It has potential to halt the up move given the fact that it has occurred near the high price levels.

Going by the pattern analysis, it is seen that the NIFTY has attempted to move past the resistance of the rising trend line. This was acting as resistance as the NIFTY has breached it on the down side.

Overall, there is no disputing the fact that the overall structure continue to remain perfectly buoyant. However, NIFTY stands overbought on the Stochastic and is on the verge of getting overbought on the RSI. Further, the OI has decreased with the rise and this indicates that heavy short covering has occurred. Even if the NIFTY attempts to continue it’s up move, some loss of momentum is likely. Maintenance of vigil at higher levels is reiterated. 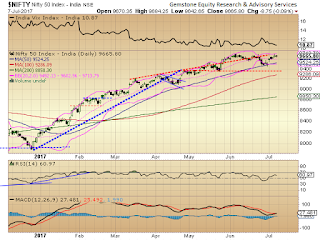 The Markets had a quiet session on Friday much on the expected lines. The NIFTY oscillated in a 40-odd point range with not much volatility and ended the day with a net loss of 8.75 points or 0.09%. We do not see the Markets making much headway and the levels of 9700-9725 will remain important levels to watch out for. No major up move is expected unless the NIFTY breaches these levels in a convincing manner. We expect positive consolidation to continue in the Markets.

The Relative Strength Index – RSI on the Daily Chart is 60.9671 and it remains neutral showing no divergences against the price. The Daily MACD has reported a positive crossover and it is now bullish trading above its signal line. Occurrence of a Spinning Top indicates indecisiveness and also signals loss of momentum at higher levels.

The pattern analysis show that the NIFTY has resisted precisely to the rising trend line which it broke on the downside while it corrected previous month. Further to this, the rising nature of the trend line makes it even more difficult for the Markets for a clear breakout.

Overall, the structure of the Chart suggests that consolidation is expected to continue. However, this is likely to turn out to be a positive consolidation and downsides are likely to remain limited. We will see clear sector specific rotations leading to stock specific out-performance. Though we continue to maintain positive bias we continue to recommend protection of profits at higher levels even with the underlying trend remaining intact. 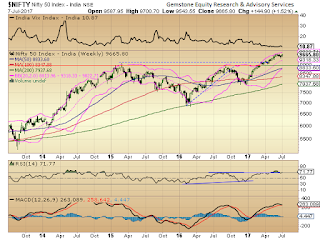 In a Week that remained better-than-expected for the Markets, the benchmark NIFTY50 ended with net gains of 144.90 points or 1.52% on week-on-week basis. Though the Markets remain overbought on Weekly Charts, we see the Markets remaining in a broad range. Though a fresh breakout is not expected this week as it would be too soon and too fast, we certainly expect the Markets to trade with a positive bias.

The Relative Strength Index – RSI on the Weekly Chart is 71.7787. Though it shows no divergence against the price, it stays in overbought territory. The Daily MACD stays bullish while trading above its signal line. However, it is sharply moving towards reporting a negative crossover.

The pattern analysis on the Weekly Chart the Markets consolidating in a narrow range after the up move that it saw from 8950-9000 mark as it achieved a breakout from there. We expect this consolidation to continue and some area pattern to develop before Markets move up again.

Overall, we should not fail to understand that long the period of consolidation, healthier it will be for the Markets. Such consolidation would give Markets more impetus to head higher over coming week. So for as the coming week is concerned, we strongly recommend that unless the Markets breach the previous high of 9700-9710 mark, it should be approached with caution and profits should be protected at higher levels. 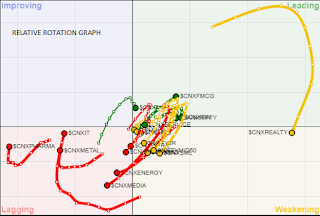 A study of Relative Rotation Graphs – RRG very clearly show that REALTY which led the relative outperformance over past 10 weeks is now ready to take the back seat. REALTY will be seen losing momentum over coming Week. FMCG will continue its stellar show in the coming Week. PHARMA, IT and Metal Stocks will considerably improve their ground and will ready itself for serious up ticks over coming week. We will see broader indices like NIFTY Next 50, MID50, NIFTY 100,etc losing momentum in the coming week.

Important Note: RRG™ charts show you the relative strength and momentum for a group of stocks. In the above Chart, they show relative performance as against NIFTY Index and should not be used directly as buy or sell signals.
(Milan Vaishnav, CMT, is Consultant Technical Analyst at Gemstone Equity Research & Advisory Services, Vadodara. He can be reached at milan.vaishnav@equityresearch.asia)