Markets remained thoroughly volatile as expected and ended the day with minor gains. Today, we can once again expect a negative start to the Markets and we can certainly expect some amount of weakness to return again as the Markets are likely to test its pattern supports in the immediate short term. Today, with the negative start expected once again, it will not be a surprise if we see some ranged weakness persisting in the Markets. Any up moves, shall remain limited with good amount of volatility remaining ingrained in it. 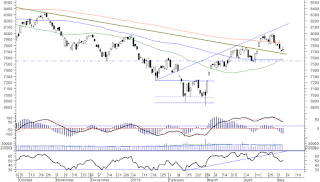 The RSI—Relative Strength Index on the Daily Chart is 49.4172 and it remains neutral as it shows no bullish or bearish divergence or any failure swings. The Daily MACD stays bearish as it trades below its signal line.

On the derivative front, the NIFTY May futures have over 9.39 lakh shares or 4.89% in Open Interest. This number continues to show good amount of unwinding of long positions in the Markets. The NIFTY PCR stays unchanged.

Coming to pattern analysis, the Markets have breached its 200-DMA which stands at 7837 and this level will continue to pose resistance to the Markets in the immediate short term. On the medium to  long term, there has been slight improvement in the structure as the 50-DMA has shown a positive crossover to 100-DMA as it has moved above the 100-DMA. However, given a immediate short term view, the Markets are likely to remain ranged and in any case of weakness persisting, the Markets may test its pattern supports of 7670 levels. Any breach below that will induce some more weakness.

MARKET TREND FOR THURSDAY, MAY 05, 2016
We continue to keep today’s analysis on more or less on similar lines. The Markets have continued its moderate drift over couple of days and is likely to continue to do so. Today, we can once again see the Markets opening on a quiet note and look for directions. Some up move can be seen but it would be extremely important to see if the Markets are able to sustain any intermediate up moves. The intraday trajectory of the Markets would be important to watch out for. 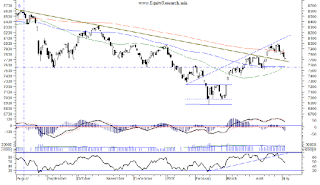 The RSI—Relative Strength Index on the Daily Chart is 47.3244 and it has reached its lowest value in last 14-days which is bearish. It does not show any bullish or bearish divergence.
The Daily MACD remains bearish as it trades below its signal line.

On the derivative front, the NIFTY May futures have shed over 6.03 lakh shares or 3.05% in Open Interest. This certainly suggest offloading / unwinding of long positions in the Markets. The NIFTY PCR stands at 0.82 as against 0.86.

Coming to pattern analysis, the Markets have continued to drift steadily after it’s broke its 140-odd point trading range which had support at its 200-DMA which stands at 7840. This level, i.e. 200-DMA will continue to pose resistance to the Markets in the immediate short term until the  Markets move past this level. Having said this, if the weakness persists, the Markets are likely to test its pattern support at 7675 levels. If this level is breached, we will see some more weakness creeping into the Markets. On the up side, they are likely to remain capped in a limited range.  Any weakness will not rule out the possibility of the Markets testing 7550 levels wherein multiple supports converge.

Overall, we may see some stability returning to the Markets. However, there are chances that this remains a temporary affair and any up moves may get possibly sold into. The lead indicators read along with the F&O data suggest that we may continue to see some more weakness in the immediate short term and any respite from this, if any, will remain temporary. Fresh buying may be done at lower levels but at the same time, profits should be protected with every up move.

MARKET TREND FOR WENDESDAY, MAY 04, 2016
Though the Markets had a better than expected first half of the session yesterday, it continued to resist at its 200-DMA very much on expected lines and ended yet another day with losses. Today, we can expect the Markets to open again on a lower note and trade negative at least in the initial trade. The Markets are expected to continue to show weakness and in event of any upswings, the 200-DMA which is 7843 will continue to pose resistance. 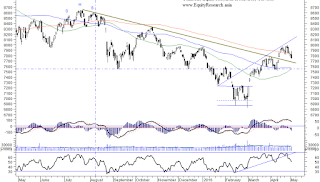 The RSI—Relative Strength Index on the Daily Chart is 50.0089 and it has reached its lowest level in last 14-days which is bearish. The RSI has made a fresh 14-period low while NIFTY has not yet and this is Bearish Divergence. The Daily MACD stays bearish as it trades below its signal line.

On the derivative front, the NIFTY May futures have 17,100 shares or nominal 0.09% in Open Interest. This figure remains nominal and NIFTY PCR stands at 0.86 as against 0.90 yesterday.

Coming to pattern analysis, the Markets finally gave up its support of 200-DMA after oscillating in a 140-odd points range with the support of 200-DMA and the upper band of 7980. Having said this, it is important to note that with the Markets now slipping below 200-DMA level, any upswings will continue to face resistance at this level. In case of weakness continuing, it is likely to test its multiple support levels around 7600-7550 levels. These levels have 2 of its DMAs converging and also has a pattern support around these levels. Even if the Markets tests these  levels, there won’t be any significant breach of trend that the Markets have formed after forming lows around 6800 in February. It is also important to note that any further breach below this will dent the reversal of the Markets and will have some structural damage to the Charts.

Overall, it would be important to observe Market’s behavior around 200-DMA in case of any up move and around 7550 in case of further weakness. It is likely that the Markets will see some intermittent selling bouts from higher levels and we continue to advice to utilize these up swings below 200-DMA for booking profits and protecting existing positions. Volatility will continue to remain ingrained in the Markets. Continuance of cautious outlook is advised for today.

MARKET TREND FOR Tuesday, May 3, 2016
After taking support on the 200-DMA which stands at 7846 today, the Markets slipped a bit below that on yesterday’s close. Today, we can once again expect the Markets to open on a quiet note and look for directions. The analysis remains more or less on similar lines today as well as the levels of 200-DMA will continue to pose resistance intraday as well as at Close levels. The intraday trajectory that the Markets form would be important to watch out for and any continuing weakness will see the Markets testing 7775 and 7750 levels. 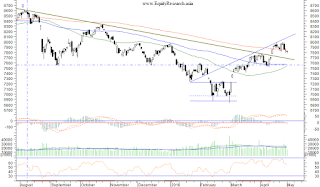 The RSI—Relative Strength Index on the Daily Chart is 54.1632 and it remains neutral as it shows no bullish or bearish divergence or any failure swing. The Daily MACD is bearish post reporting negative crossover and it now trades below its signal line.

Coming to pattern analysis, the Markets have retraced after forming an intermediate top at 7879 levels and have since then made multiple attempts to move past it. While doing so it also tested its 200-DMA for multiple times and while oscillating in a 140-odd points range for couple of days finally slipped below the 200-DMA. Though it continues to stay within a filter, the level of 200-DMA will continue to pose resistance intraday as well as at Close levels. In the immediate short term, the Markets may see some weakness continuing and if the weakness persists, then it may test some lower levels like 7750 and downwards. Having said this, if we take a intermediate view, the Markets have so far formed a strong bottom around 6580 levels and there would be no fear of reversal of trend so long as Markets trade above 7550 levels.

Overall, if we take a immediate short term view, there are chances that we may see the Markets remaining range bound and little weak while continuing to resist to 200-DMA. Purchases should be kept selective and limited to defensives and up moves should be continued to be utilized to protect profits. Continuance of positive outlook is advised for today as well.

Though the Markets oscillated in a 80-odd points on Friday, it remained in a corrective mode, much on analyzed lines. Today as well, the Markets are likely to see a negative opening and is likely to open well below its 200-DMA which stands at 7850 today. The Markets will confirm its signs of fatigue that it had been displaying over past couple of days and this will keep the short term top of 7978 sacrosanct at least in the immediate short term. 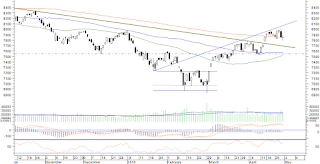 While having a look at pattern analysis, the Markets attempted to move past its 200-DMA but failed to give a clear breakout after that. It has oscillated some 150-odd points while forming an intermediate top at 7978 after failing to clear this level twice. On the Weekly Charts, not breakout has been attempted. Returning to Daily Charts, today’s expected negative opening is likely see the Markets opening below its 200-DMA levels and this level will now continue to act as resistance for the Markets. No significant strength can be expected from the Markets until it moves past its 200-DMA and clears the intermediate top that it has formed. In event of weakness continuing, it would not be a surprise if the Markets test 7700-7750 levels.

Overall, the Markets have started to confirm all the signs of fatigue that it has been displaying over last couple of days. There are bright chances that we see some more weakness lingering in the Markets. Any fresh exposures should be kept limited to the defensives while keeping overall purchases limited. Until the critical resistance levels are cleared, all the up moves should be utilized for booking profits at higher levels.