MARKET TREND FOR FRIDAY, OCTOBER 21, 2016
Domestic Equity Markets showed good amount of resilience near the resistance levels of 8690-8710 zones as it resisted to these levels throughout the day yesterday while it ended the day with modest gains. Today, we will continue to see the NIFTY trading with resilience with somewhat positive bias and the levels of 8690-8710 will remain important to watch out for. There are chances that the NIFTY will attempt to resume its up move if it manages to move past 8750 levels. This chances of this happening remain relatively high given the pattern of the lead indicators. 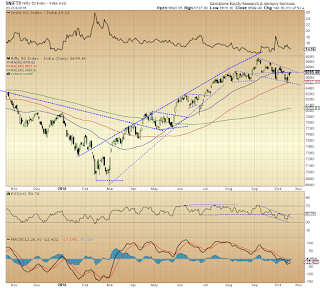 The RSI—Relative Strength Index on the Daily Chart is 50.7563 and it remains neutral as it shows no bullish or bearish divergence or any failure swings. The Daily MACD remains bearish as it trades below its signal line. However, it is likely that it reports a positive crossover if the Markets do not weaken and if it consolidates in coming days.

On the derivative front, the NIFTY October futures have added over 6.45 lakh shares or 3.59% in Open Interest. This throw a significant input which suggests that unwinding has stopped and so has short covering and fresh longs are seen being built in the system.

Coming to pattern analysis, it still remains evident that the NIFTY now remains in the falling channel drawn from 8968 levels. Though it continues to remain in this channel, it faces resistance at 8709, which is the 50-DMA level and then at 8755 which is the falling trend line pattern resistance for the NIFTY. If the NIFTY manages to move past the 8755 level in coming days, we will witness fresh resumption in the up move. However, until that happens, range bound oscillation of the NIFTY will continue with volatility remaining ingrained in it.

All and all, though the 50-DMA levels might resist at Close levels, the lead indicators and the F&O data show the bias shifting to positive. Even if the NIFTY consolidates, it seems that the downside may be range bound and we might see the NIFTY attempting resumption of up move if it manages to move past 8750-8760 zones. Until this happens, though profits be vigilantly protected at higher levels, very selective purchases too should be made keeping in view the imminent chances of stock specific out-performance.

MARKET TREND FOR THURSDAY, OCTOBER 20, 2016
The Markets on Wednesday traded precisely on analyzed lines as it continued to resist to the 8690-8700 zones for the entire trading day before ending the day with marginal losses. Today, the analysis remains more or less on similar lines once again. We will see NIFTY continuing to resist at 8690-8710 zones and these level will continue to pose some formidable resistance before NIFTY resumes its up move. Volatility and choppiness will continue to remain ingrained in the Markets. 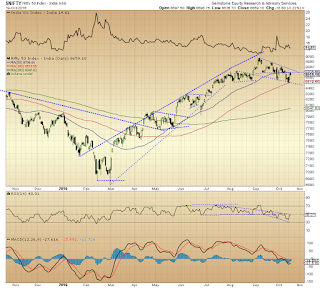 The RSI—Relative Strength Index on the Daily Chart is 48.01 and it remains neutral as it shows no bullish or bearish divergence or any failure swings. The Daily MACD still remains Bearish as it trades  below its signal line.

On the derivatives front, the NIFTY October futures have shed yet another 4.50 lakh shares or 2.45% in Open Interest. This indicates continuing offloading of long positions in the system.

Coming to pattern analysis, the neckline levels of descending triangle pattern that the Markets breached on the downside are acting as resistance in the times of pullback. The zones of 8690-8710 will continue to resist until the NIFTY sees a successful resumption of up move. Until this happens we will continue to see NIFTY oscillating in a broad trading range with some amount of volatility ingrained in it.

Overall, we will not see any meaningful up move only after NIFTY moves past the levels of 8755-8775 zones which will take it out of the falling channel it has formed. Until this happens, we will see NIFTY continuing to remain vulnerable to selling bouts from higher levels. Though stock specific out performance will continue, we continue to reiterate our cautious view on the Markets today.

MARKET TREND FOR WEDNESDAY, OCTOBER 19, 2016
Domestic equity markets had a decent day yesterday as it saw a technical pullback. We had mentioned in our yesterday’s edition that the NIFTY has achieved a measuring implication arising out of a breach from descending triangle formation. Following this, a technical pullback was expected however, the yesterday’s session remained better than expected. Today, we can expect a mildly positive opening but the NIFTY is likely to continue to find resistance at 8690 and then the 50-DMA which stands at 8704. 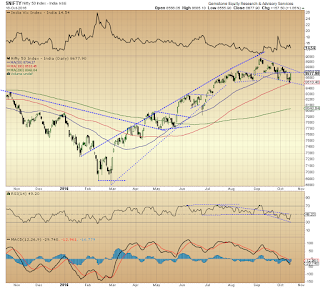 The RSI—Relative Strength Index on the Daily Chart is 49.2011 and it remains neutral as it shows no bullish or bearish divergence or any failure swings. The Daily MACD still continues to remain bearish as it trades below its signal line.

On the derivative front, the NIFTY October futures have 3.35 lakh shares or 1.79% in Open Interest. This clearly signifies heavy short covering in the Markets.

Coming to pattern analysis, the NIFTY not only achieved the lower target arising out of its negative breach from a Descending Triangle Formation, but also tested its 100-DMA levels. While taking support at these levels, a technical pullback was expected. This happened yesterday, however, it becomes important to note that the NIFTY still continues to trade below its 50-DMA which is 8704 and the level of 8690 which was the support that it broke on the downside.  Both of these levels will continue to act as resistance for the NIFTY in the near term.

Overall, even after yesterday’s rise, the NIFTY is not completely out of the woods. It continues to remain in a falling channel created from 8968 levels and also it trades below the 8690-8710 resistance zones. Further, it is also evident that the rise that we saw yesterday was more on account of short covering it is important that this gets replaced with fresh buying. Until this happens, we will continue to see the NIFTY oscillating in a broad trading range and it will also remain vulnerable to selling bouts from higher levels. We reiterate our cautious view and advise to continue to use all up moves in protecting profits on existing positions.

MARKET TREND FOR TUESDAY, OCTOBER 18, 2016
While trading precisely on analyzed lines, the domestic equity markets ended yesterday with losses while heading towards the 8500-100DMA support zone. Today, we may see the Markets attempting to gain some stability but just like yesterday, the levels of 8500 and the 100-DMA which is also 8500 will be crucial level to watch for. It would be extremely important for NIFTY to trade above this level in order to avoid any more weakness from creeping in. Any breach below this will lead to some more weakness in the Markets. 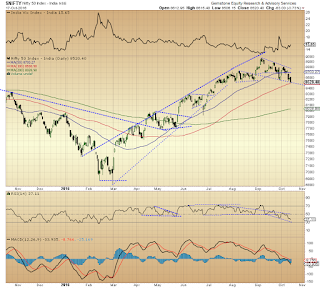 The RSI—Relative Strength Index on the Daily Chart is 37.1088 and it has reached its lowest value in last 14-days which is bearish. It does not show any bullish or bearish divergence.
The Daily MACD stands bearish as it trades below its signal line.

On the derivative front, the NIFTY October futures have shed yet another over 4.86 lakh shares or 2.53% in Open Interest. This clearly indicates continuation of long unwinding / offloading in the Markets.

Coming to pattern analysis, NIFTY breached a Descending Triangle pattern on the Daily Charts as it went below the 50-DMA which was also its neckline level of 8690. With yesterday’s decline, it has completed its expected measuring implication. While it reached its expected levels post negative breakout, the level of 8500 is important pattern support as well. Post recent high of 8968, the NIFTY has formed a small falling channel as well. The level of 8500 is a pattern support of the lower support line of the Channel and is also the 100-DMA which is expected to act as support in the near term at Close.

All and all, we are likely to see NIFTY consolidating again and attempting to gain some stability. With the level of 8500 being all important support, any pullbacks will continue to meet with intermittent selling pressures / bouts from higher levels. This will continue to happen until we see clear sign of resumption of up move. This will also keep volatility and choppiness ingrained in the Markets. Selective outperformance will be seen and it is advised to adopt highly stock specific approach in such Markets.

MARKET TREND FOR MONDAY, OCTOBER 17, 2016
The domestic equity markets witnessed a range bound session on Friday and while it ended with very minor gains, the vulnerability continued to remain very much visible on the Daily Charts. Today, we might see a stable opening and some technical pullback as well but in any case, the up moves are likely to remain limited and the level of 8500 would now be the key support levels for the Markets as it also it is a important pattern support and also falls in close vicinity of the 100-DMA which is 8493. 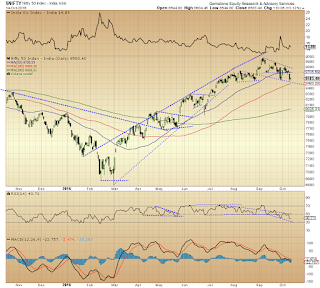 The RSI—Relative Strength Index on the Daily Chart is 40.7080 and it remains neutral as it shows no bullish or bearish divergence or any failure swings. The Daily MACD stays bearish as it trades below its signal line.

On the derivative front, the NIFTY October futures have 5.57 lakh shares or 2.81% in Open Interest as it continued to see unwinding of long positions in the Markets.

Coming to pattern analysis, the NIFTY has clearly shown a downward breach from the Descending Triangle formation on the Daily Charts. On the Weekly Charts as well, short term weakness remains evident and visible. Returning back to Daily Charts, it is likely that in event of some more weakness, the NIFTY has major support at 8500 level. This is a major pattern and also coincides with 100-DMA which is 8493. This zone should act as major support for the Markets. In event of any technical pullback, the level of 8690 will remain a very stiff and sacrosanct resistance in immediate short term.

All and all, it is also important to note on fact that the while the Markets have declined, it has consistently seen reduction of open interest. This is because of steady unwinding / off loading of long positions. At the same time, a fact needs to be observed that there is no visible creation of major shorts in the system. This requires us to sound some more caution as in event of any further downsides, the NIFTY will see difficulty finding support from the short positions. We reiterate to use all technical up moves in protecting profits and maintain cautious outlook on the Markets.