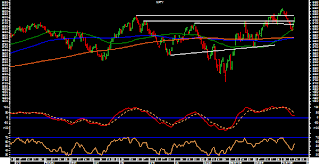 The Markets have risen over 230-odd points in last two sessions and today, we can see a flat opening and see the Markets consolidating a bit. If the Markets consolidate, and even if it mildly corrects, it would be healthy for the Markets in the immediate short term. The Markets would open flat to mildly negative and look for directions while intraday trajectory playing a important role to decide the trend for today.

For today, the levels of 6225 and 6240 would act as immediate resistance for the Markets. The levels of 6150 and 6110 are immediate supports for the Markets.
The RSI—Relative Strength Index on the Daily Charts is 56.1796 and it is neutral as it shows no bullish or bearish divergences or any kind of failure swings. The Daily MACD still continues to trade below its signal line. On the Candles, A rising window occurred  (where the top of the previous shadow is below the bottom of the current shadow).  This usually implies a continuation of a bullish trend.  There have been 7 rising windows in the last 50 candles--this makes the current rising window even more bullish.
On the derivative front, NIFTY November futures have shed over 3.94 lakh shares or 2.20% in Open Interest. This signifies that the short covering in the Markets have continued. Additions of fresh longs would be required to take the rally ahead.
Given the above reading, with the Markets rising over 230-odd points in previous two session and with the total open interest being reduced, some correction in the Markets, or at least consolidation is imminent and also required. There are fair chances that we see the Markets consolidating in the near term. Addition of fresh longs and increase in OI would be required to set the base for a further up move.
All and all, the Markets are likely to see a mild correction or at least consolidation in the near term especially after one way 230-odd points rise. We would see the Markets consolidating but the undercurrent would continue to remain buoyant and bullish and the defensives are likely to out perform. Any downside should be used to make selective purchases. Overall, positive outlook is continued on the Markets.

The Markets took a breather as it gave a much needed relief rally ending its  7-day losing streak as it ended the day in the green, though after coming off from its highs on Thursday. Friday was a trading holiday. The Markets saw a positive and decent opening on Thursday and in the morning trade, it continued to inch upwards giving day’s high of 6101.65 The Markets though maintained its gains, it came of its highs as the session progressed. However, it maintained most of its gains and finally ended the day at 6056.15, still posting a decent gain of 66.55 points or 1.11% forming a higher top and higher bottom on the Daily High Low Charts. 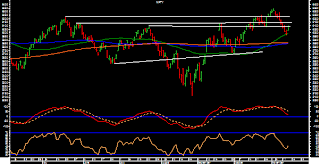 At least as of now, the levels of 50-DMA, which is 5994 has held out as support at Close levels. Today, the Markets are set to see yet another positive opening and continue with its reversal that it began on Thursday. However, the opening levels of the Markets would be around the Thursday’s high, and it would be critically important to see that the Markets sustains and continues with its up move from there.

The RSI—Relative Strength Index on the Daily Charts is 46.5682 and it is neutral as it shows no bullish or bearish divergences or any kind of failure swings. The Daily MACD continues to trade below its signal line.

On Weekly Charts, the RSI is 54.4430 and is also neutral with no divergences or any failure swings. The Weekly MACD is bullish as its trades above its signal line.

On the derivative front, NIFTY November futures have shed over 9.34 lakh shares or 4.94% in open interest. This shows that the rise that we saw has been more on account of short covering and no fresh buying is reported, at least as of now.

The pattern analysis, the lead indicators and the F&O data presents a mixed picture. The pattern analysis clearly shows that the Markets have taken support at its 50-DMA at Close levels, at least as of now. The lead indicators show that there might be some temporary weakness persisting in the Markets but on Weekly Charts, all such indicators remain in place. The F&O data, however, shows that the rise that we saw on Thursday has been more on account of short covering than on any fresh buying. This remains a grey area it would be critically important to see if the Markets report fresh buying today as well as in coming session so as to confirm the attempt of reversal.

All and all, we are set to see the Markets opening on a positive note and continuing with its up move, at least in the initial session. It would be, however, very important for the Markets to add fresh positions to sustain and continue with its up move and confirm the reversal. The Markets are not completely out of the woods as yet it is advised to remain very moderate with the positions, avoid over exposure and shorts. Overall, cautious optimism is advised for today.