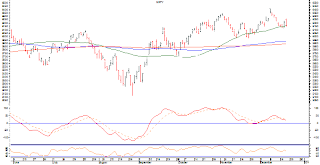 The RSI—Relative Strength Index on the Daily Chart is 49.2470 and it is neutral as it show no bullish or bearish divergence or any kind of failure swings. The Daily MACD still continue to remain below its signal line and is therefore, bearish.

On the derivative side, NIFTY December futures have shed over 30.69 lakh shares or 13.92% in Open Interest. This can be attributed to some rollovers that were seen. Also, while remaining sellers in Futures segment, FIIs have been reported net buyers in Cash segment. This signifies that while making purchases in cash segment, FIIs have preferred to hedge these positions by shorting in the derivative segments.

Given this, the pattern analysis of the Markets shows that the levels of 50-DMA have hold good so far as of today. However, today’s negative opening would cause the Markets open lower than its 50-DMA and this is likely to cause some temporary weakness in the Markets. However, even with this, the intraday trajectory would remain very critically important as this can turnout to be mere consolidation at these levels than a downward breach.

All and all, given this reading, we continue to advise to refrain from creating short positions in the Markets. This is because of two reasons. One – there has been significant creation of short positions in the Markets that can cause short covering; and second – the defensive stocks will continue to out perform and sectoral out performance can be seen. While remaining light on positions and avoiding over exposure and shorts, cautious outlook is advised for today. 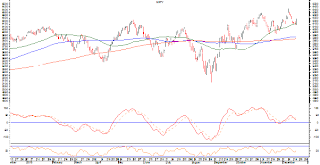 Today, expect the Markets to open on a modestly positive note again and continue with its up move at least in the initial trade. The overall triggers remain supportive and it is likely that the Markets would sustain its positive opening and build up on it. The levels of 50-DMA has so far nicely continued to act as support at Close levels.

The lead indicators continue to remain in place with no negative breach on either side. The RSI—Relative Strength Index on the Daily Chart is 53.0737 and it is neutral as it shows no bullish or bearish divergence or any failure swings. The Daily MACD, however, continues to remain bearish as it trades below its signal line.

On the derivative front, NIFTY December futures have added over 1.76 lakh shares or 0.81% in Open Interest. This can be sees as no profit taking or short covering was seen during yesterday’s rally and this is a positive indication as well.

The basic structure, going by the pattern analysis on the Daily Charts remains in place as the Markets continue to trade above all of the three DMAs while 50-DMA holding out as support during the entire last week. Even F&O data shows nothing negative as of now. Going by this, the undercurrent remains intact and even if the Markets consolidates, it should be a fairly range bound consolidation with the levels of 50-DMA continue to holding out as support.

All and all, it is very much likely that we see a decently positive opening and also that the Markets sustains them, at least in the opening trade. Given this overall reading, it is recommended to continue to avoid shorts and utilize any minor profit booking events to make selective purchases. Overall continuation of positive outlook is advised as undercurrent remains intact and buoyant.

MARKET REPORT
The caution reigned heavier than optimism as the Markets declined for the sixth day in a row after a stable and positive start ahead of RBI Credit Policy that is slated to come in later today. The Markets opened on a stable and positive note and gave its intraday day of 6190.55 in the early minutes of the trade. The entire morning session saw the Markets moving in much capped range while resisting further upside. The Markets gradually gave up in the afternoon session to trade flat as it pared its morning gains. It slipped further into negative in the last hour and half of the trade and went on to give the day’s low of 6133. It ended the day a notch below its 50-DMA at 6139.05, posting a net loss of 15.65 points or 0.25% while forming a higher top and higher bottom on the Daily High Low Charts. 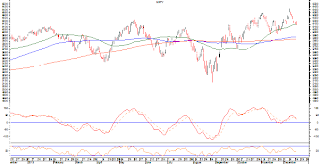 Today, the analysis remains more or less on the similar lines that of yesterday. The Markets are slated to react to the RBI Credit Policy coming in later today. Expect the Markets to open on a modestly positive note today and remain in capped range until the RBI comes up with the policy. The Markets would give its knee-jerk reactions to this later. Consensus is on a rate hike of 25bps. It would be critically important for the Markets to maintain levels above its 50-DMA.

The RSI—Relative Strength Index on the Daily Chart is 47.1796 and it has reached its lowest value in last 14-days which is bearish. Also, the RSI has set a new 14-day low while NIFTY has not and this is bearish divergence. The Daily MACD remains bearish as it trades below its signal line.

On the derivative front, NIFTY December futures have shed 5.96 lakh shares or 2.66% in Open Interest. This shows that there has been shedding of long positions as there has been heavy caution ahead of RBI Policy.

Given all this, the Markets show some signs of temporary weakness. It has closed a notch below its 50-DMA at Close but stays comfortably within its filters as of now. It would be critically important for the Markets to maintain and trade above its 50-DMA and any significant breach below this level is likely to bring in temporary weakness. Though there has been a consensus on the rate hike of 25 bps, any surprise on either side would make the markets extremely volatile.

All and all, there are high chances that the Markets remains in a capped range in the beginning and also show quite good amount of volatility in the afternoon trade. In case of weakness, it is strongly advised to refrain from creating shorts. The defensives can out perform and sectoral out performance is likely to be seen. Given the lack of directional bias, it is advised to avoid over exposure in the Markets and maintain current positions. Overall, cautious outlook is advised for today. 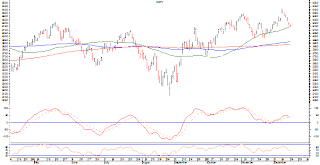 The Markets have took support near its 50-DMA on expected lines and that support has held on as of today. Today, we can expect the Markets to open on a positive stronger note and continue with its up move, at least in the initial trade. It would be equally critical for the Markets to sustain the opening levels and in any case of downside the 50-DMA still continue to hold as important support.

Even after decline of five days in a row, the lead indicators continue to remain in place. The RSI—Relative Strength Index on the Daily Chart is 48.3087 and it continues to remain neutral as it shows no bullish or bearish divergences or any kind of failure swings. The Daily MACD however has reported a negative crossover and it now trades below its signal line. This is expected  to reverse again if the Markets sustains its opening gains and capitalizes on its stronger opening.

On the derivative front, the NIFTY December futures have added 4.56 lakh shares or 2.07% in Open Interest. This is a positive sign showing addition of fresh positions yesterday.

If we go by the pattern analysis, there is no negative breach on the technical charts. The Markets have held on to its support of 50-DMA at Close levels and currently trades above all of its moving averages. The lead indicators show a very minor immediate weakness but that should be taken care of if the Markets attempt a pullback. The derivative figures show good amount of Open Interest addition in last five sessions indicating more likelihood of the Markets taking support at these current levels.

All and all, there are chances that the Markets see a positive and stronger opening today and importantly sustain them. Though the intraday trajectory would continue to remain very important, any minor declines should be continued to be used for making fresh purchases. Shorts should be strictly avoided. Overall, positive outlook is advised for today.