MARKET TREND FOR THE DAY
The session yesterday turned out to be precisely in the way it was analysed by us. We had categorically stated that the Markets will see a gap up opening but at the same time, they are likely to resist at its 50-DMA and therefore intraday trajectory would be very crucial and critically important.
Perfectly keeping in line with the above analysis, the Markets did see a gap up opening in the Morning but gave its intraday high of 5011.90 as against the 50-DMA of 5022 in the early minutes of the trade and thereafter remained in a sideward / falling trajectory for the rest of the session. The Markets pared its early morning gains a bit to end the day at 4936.85, posting a net gain of 104.80 points and still forming a sharply higher top and higher bottom on the Daily High Low Charts as evident from the below given chart. 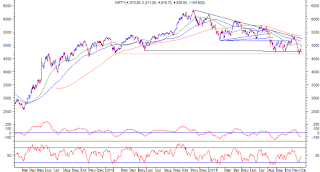 Today, the Markets are expected to see a flat opening and shall look for directions and it shall be important for the Markets to remain in positive trajectory to avoid weakness.
The Indian Markets are too likely to see some consolidation with the levels of 5020 acting as immediate resistance and the levels of 4880 and 4835 acting as supports. All lead indicators continue to remain in place with RSI—Relative Strength Index at 48.4468 and is neutral as it shows no negative divergence or failure swings. The Daily MACD, though it is improving, is still below its signal line. On the Candles, A rising window occurred  (where the top of the previous shadow is below the bottom of the current shadow).  This usually implies a continuation of a bullish trend.
Another important thing to note that the Open Interest figures in NIFTY Futures has remained unchanged. This signifies that there has been no significant short covering in the Markets. Further to note is the fact that the Indian Markets remained underperformer as compared to its peers. Both of this factor leave gap for a continuation of up move. However, as mentioned above, the intraday trajectory would be crucial and critically important.
The resistance near the 50-DMA has been a technical factor and this level shall continue to act as temporary resistance and the Markets are likely to see some consolidation around these levels. Also, therefore, further sustainable up move shall occur only above this, but the Markets are likely to remain in a range, bit volatile and consolidate with a upward bias. Shorts should be avoided. Overall, cautious but positive outlook is advised for today.
Milan Vaishnav,
Consulting Technical Analyst,
www.MyMoneyPlant.co.in
http://milan-vaishnav.blogspot.com
+91-98250-16331
milanvaishnav@mymoneyplant.co.in
milanvaishnav@yahoo.com
Posted by MyMoneyPlant.co.in at 12/02/2011 08:59:00 PM No comments:

MARKET TREND FOR TODAY
The Markets had a volatile session yesterday, and after moving on either side in a volatile manner, finally ended the day with moderate gains and in the process formed a lower top and lower bottom on the Daily High Low Charts. But still the Markets managed to end the day near the high point of the day on improved volumes which is a positive sign for the Markets.
We have been mentioning in past issues of Daily Market Trend Guide that after the 150-point spurt that we saw couple of days back, the Markets were likely to consolidate and at the same time, it was also important for the Markets to maintain support levels of 4780-4820. The Markets precisely did the same thing as it maintained a Close above these levels and also consolidated mildly with very less volumes. The Markets did not breached any significant supports either. 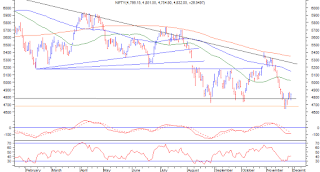 As evident from the above Chart, though the Markets rested precariously near the multiple supports, the OVERSOLD lead indicators prevented it from breaking down.
For today, expect a huge gap up opening following collective Central Banks action in Europe which as sparked off a huge rally in the global Markets. This will ensure a gap up opening in the Indian Markets. The Markets are expected to open very strong but are likely to find resistance near the 50-DMA levels of 5022.
The RSI—Relative Strength Index on the Daily Chart is 41.5530 and is neutral as it shows not negative divergence or failure swings. The Daily MACD too continues to trade below its signal line.
Having said this, the Markets are expected to open strong and as mentioned earlier, it would be very necessary for the Markets to maintain positive trajectory in order to capitalize on today’s strong opening. Secondly, this should not be construed as resolution of European crisis and there are strong chances that some profit booking may be seen today, OR the Markets may consolidate again at higher levels.
All and all, this spurt should be used in selective stock picking and the profits at these higher levels should be very vigilantly protected. Even if the upside sustains, we may see consolidation again at these levels. Positive outlook is advised for today.
Milan Vaishnav
Consulting Technical Analyst,
www.MyMoneyPlant.co.in
http://milan-vaishnav.blogspot.com
+91-98250-16331
milanvaishnav@mymoneyplant.co.in
milanvaishnav@yahoo.com
Posted by MyMoneyPlant.co.in at 12/01/2011 09:59:00 AM No comments:

MARKET TREND FOR TODAY                                          November 29, 2011
The Markets yesterday a saw a gap up opening on back of OVERSOLD technicals and very positive global cues as it extended its opening gains 2.5 fold and ended the day on a robust note at 4851.30, posting a strong gain of 141.25 points or 3% and thus formed a sharply higher top and higher bottom on the Daily High Low Charts.
The biggest concern yesterday has been the volumes that were much below average and they will continue to remain a concern today.


Technically speaking, since the Markets have ended the day yesterday near the high point of the day, it should continue with its up move today, at least in the initial session, but as said above, lack of volumes will remain a concern.
For today, expect the Markets to open on a flat and look for directions. The Markets have hold good the support of 4720 and have also managed to move past the levels of 4780-4820 and have thus entered successfully into the broad trading range of 4780-4820 on the lower side and 5270 on the upper side.


Today, with flat opening expected, the intraday trajectory would remain crucial and in any kind of correction seen, the Markets will have to remain above the levels of 4820 in order to avoid slipping into weakness again. For today, the levels of 4880 and 4935 shall act as resistance and the levels of 4820 and 4780 are likely to act as supports.
The RSI—Relative Strength Index on the Daily Chart is 41.82 and is neutral as it shows no negative divergence or failure swings. The Daily MACD continues to trade below its signal line.


With all lead indicators in place and with all stocks and Nifty showing overall minor addition in total Open Interest, the technicals point towards continuation of up move, however, some consolidation and sideward movements cannot be ruled out. There are also chances that some mild profit taking may be seen, but at the same time, the up move is likely to continue.
All and all, stock specific activities shall be seen. Selective purchases may be seen while vigilantly protecting profits at higher levels. Overall, positive outlook is advised for the day.

MARKET TREND FOR TODAY                                             November 28, 2011
We had categorically mentioned in our Friday’s edition of Daily Market Trend Guide that the levels of 4780 would be critical as the Markets will have to move past them in order to re-enter the broad trading range and avoid further weakness. Also, along with that we had mentioned that the levels of 4720 would be equally critical and the markets will have to ensure that it trades above that to avoid weakness. The Markets did so for the most of the trading session, but finally ended the day notch below it at 4710.05 ending the day with loss of 46.40 points. With this, the Markets ended the week with net loss of 195.75 points or 4% and in the process formed a Similar Top but higher bottom on the Daily High Low Charts.
Technically speaking, it would be critical for the Markets to open above 4720 to avoid any weakness. This is likely as Friday’s session witnessed very low volumes relatively and today’s with the global scenario remaining positive, we are likely to see a positive opening today.
Thus, expect the Markets to open on a positive note today and look for directions. For today, the levels of 4720 and 4680 shall act as support on the lower side and on the upper side, the levels of 4780 shall continue to act as immediate resistance. As mentioned on Friday, the markets will have to move past the levels of 4780 in order to avoid any weakness.
The RSI—Relative Strength Index on the Daily Chart is 30.9593 and is neutral as it shows no negative divergence or failure swing. But it has move out of its Oversold range and thus, this is bullish. The Daily MACD still continues to trade below its signal line.
On the Weekly Charts, the RSI is 37.2604 and it does not show any failure swing. However, NIFTY has set a new 14-week low but the RSI has not and this is BULLISH Divergence. The Weekly MACD on the other had has reported a bearish signal as it has given a negative crossover and now trades below its signal line.
Given the above reading, it is extremely critical for the Markets to, firstly, maintain the levels above of 4720 to avoid any kind of further weakness. Secondly, it will have to move past the levels of 4780 so that it is able to move back into the broad trading range and this would mean that the Markets are under no negative breach as on immediate basis.
Thus, until this happens, we are likely to see volatile movements in the range of 4720-4780 and the intraday trajectory would be crucial. However, given the lead indicators, the bias remains positive. Over all, cautious optimism is advised for today.
Milan Vaishnav,
Consulting Technical Analyst,
www.MyMoneyPlant.co.in
http://milan-vaishnav.blogspot.com
+91-98250-16331
milanvaishnav@mymoneyplant.co.in
milanvaishnav@yahoo.com
Posted by MyMoneyPlant.co.in at 11/28/2011 10:18:00 AM No comments: