The correction in the Markets continued as it ended the day after coming off over 100-odd points from its intraday highs and ended the day at 6187.25, posting a net loss of 27.90 points or 0.45%.

Today, expect the Markets to open again on a modestly negative note and continue with its corrective activities. We had mentioned in our previous edition of the Daily Market Trend Guide that if the Markets breaches the levels of 6230, it might test its another support levels of 6140-6155 levels. Today's opening might cause the Markets to test these levels.

The RSI--Relative Strength Index on the Daily Chart is 56.1088 and it has reached its lowest value in last 14-days which is bearish. Also, RSI has set a new 14-day low while the NIFTY has not yet. This is bearish divergence. The Daily MACD remains bearish as it trades below its signal line.

On the derivative front, NIFTY November futures have yet another 7.49 lakh shares or 3.47% in open interest. This clearly shows that  unwinding and profit taking in the Markets have continued.

Going by the pattern analysis again, it is very clear that the breaching of the levels of 6230 has brought some more weakness in the Markets and there are chances that the Markets opens lower and takes support in the broad zone of 6140-6160 levels. Further to this, the lead indicators too show chances of continuing corrective activities in the Markets. The F&O data too show that long unwinding and profit taking has continued in the Markets.

Given this, it is also important to note that though the Markets are correcting, there is no structural breach on the Charts. So, shorts should be strictly avoided. Volatility shall remain and we can expect the Markets to take support anytime near the prescribed levels. Selective out performance of stocks would continue. It is advised to avoid shorts, take new positions extremely selectively and maintain liquidity to maintain current positions. Cautious outlook is advised for today.
Milan Vaishnav,
Consulting Technical Analyst,
www.MyMoneyPlant.co.in
http://milan-vaishnav.blogspot.com
+91-98250-16331
milanvaishnav@mymoneyplant.co.in
milanvaishnav@yahoo.com
Posted by MyMoneyPlant.co.in at 11/08/2013 08:57:00 AM No comments: 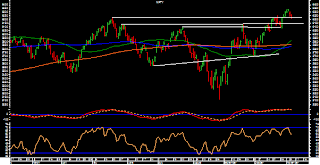 Today, expect the Markets to open on a flat to modestly negative note and look for directions. Since the Markets have ended the day below 6230 levels, there are bright chances that we may the Markets continuing to remain in the corrective mode for some time while the levels of 6230-6250 acting as resistance again.

The RSI—Relative Strength Index on the Daily Chart is 58.7872 and it is neutral as it shows no failure swings or any kind of bullish or bearish divergence.  The Daily MACD has again turned bearish as it has reported a negative crossover.

On the derivative front, the NIFTY November futures have shed yet another over 8.87 lakh shares or 3.95% in Open Interest. This shows that the profit taking and unwinding of positions had continued yesterday as well.

Going by the pattern analysis, the Markets have slipped below the 6230 levels and on its way up, the levels of 6230-6250 would again pose resistance. Until this happens, we would continue to see the Markets in the corrective mode and some chances of weakening further. The lead indicators too support this reading and so do the F&O data. Unless we see some addition in open interest with the Markets sustaining the current levels, such corrective mood would prevail in the Markets.

All and all, given this analysis, it is advised to refrain from taking over exposure and taking aggressive positions in the Markets on either side. It is further advised that while refraining from over exposure, liquidity should be maintained while making very cautious and selective purchases. Neutral to mildly negative outlook is advised for the Markets today unless it moves past the levels of 6230. 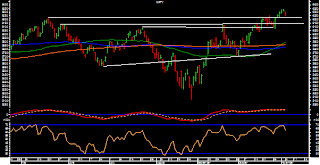 Expect the Markets to open on a modestly negative note again and look for directions. As evident on the charts, the Markets should take support in the 6230-6250 zone and if it breaches these levels on the downside, we will see some more weakness creeping in. The intraday trajectory that the Markets form after opening would be crucial to decide today’s trend.

The RSI—Relative Strength Index on the Daily Chart is 62.5643 and it is neutral as it shows no failure swings or any bullish or bearish divergence. The Daily MACD continues to remain bullish as it trades above its signal line. On the Candles, a falling window occurred. This usually implies continuation of a  bearish trend.

On the derivative front, NIFTY November futures has shed over 7.32 lakh shares or 3.16% in open interest. This is a negative indicator as it signifies that some long unwinding has been done from higher levels yesterday.

Given the pattern analysis read along with F&O data, there are high chances that the Markets continue with their corrective mood and drift lower. There are chances that the Markets attempt to take support at 6230 levels. Any breach below this would make the Markets little weaker and continue with its correction. However, this will also keep the markets volatile seeing movements on either side while lacking clear directional bias.

Overall, as mentioned, the Markets would remain little volatile and continue to trade in a range with a corrective bias. It may see lack of directional bias and continue to see mild profit taking. Intraday trajectory would be crucial. While shorts should be avoided as there is no structural breach on the Charts, even long position should be created moderately. 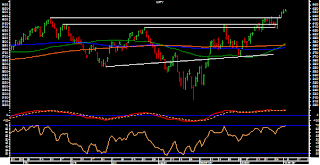 There are little signs of weariness in the Markets as seen through pattern analysis and the reading of lead indicators as well. Today, expect the Markets to open on a modestly negative to flat note and look for directions. There are bright  chances that the Markets consolidates a bit from these levels before it s resumes its upward journey.

The RSI—Relative Strength Index on the Daily Chart is 69.5775 and it has reached its highest value in last 14-days which is bullish. The Daily MACD continues to trade above its signal line.

On the derivative front, NIFTY November futures has added some 1.14 lakh shares or little over 0.50% in open interest. Open Interest remains nearly unchanged indicating no major additions or unwinding of positions.

Given from the above facts, it is clear that there are no such indications that would mean any serious correction in the Markets. At the same time, with little upward move, the Markets would enter the “overbought” territory. Given this reading, and going by the pattern analysis done along with reading of the lead indicators, it would be healthy for the Markets if it consolidates a bit before inching upwards. There are chances that the Markets takes little time, before it inches upwards.

All and all, with the above reading, we may continue to see some amount of volatility ingrained in the Markets. The Markets may remain range bound but it would continue to trade in a broad trading range. Though selective purchases can be made, the profits too will have to be vigilantly protected at higher levels. Shorts should be clearly avoided. Overall, positive caution is advised for today.