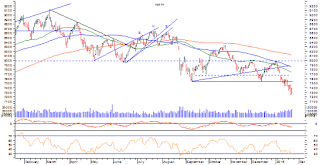 MARKET TREND FOR FRIDAY, JANUARY 22, 2016
Today’s analysis continues to remain on similar lines that of yesterday. We can expect a fairly positive start to the Markets but just like yesterday, it would be critically important to see if the Markets are able to capitalize on expected positive opening and build up further gains on that. The lead indicators of the Markets are in “oversold” territory and this likely to aid the Markets give a sustainable pullback.

The RSI—Relative Strength Index on the Daily Chart is 29.3675 and it trades in “oversold” territory. It does not show any failure swing but the NIFTY has made a fresh 14-day low while the RSI has not and this is Bullish Divergence. The Daily MACD is bearish as it continues to trade below its signal line.

While having a look at pattern analysis, the Markets have got oversold after it lost ground once its breached its critical pattern support of 7540. As mentioned often in our previous editions, the Markets will face stiff resistance at 7540 levels as and when it pulls back. Having said this, the Markets have been oscillating with a continuing negative bias in 150-odd points range and currently stand oversold. There are chances of a technical pullback today and the oversold nature of the Markets is likely to aid the same. However, at the same time, it becomes important to note that there is been no respite in massive put buying activity which throws little negative light on the attempts of the Markets to find a bottom and if not this, then it would certainly put a question mark on the sustainability of any technical pullbacks.

Overall, it is evident that though the Markets now currently stands “oversold”, they are not completely out of the woods as yet. Though it has been vigorously trying to find a immediate short term bottom, it has not done so as of now. In light of such technical condition of the Markets, we continue to reiterate our stand of keeping the purchases to restricted quantity and continue to protect profits at higher levels. 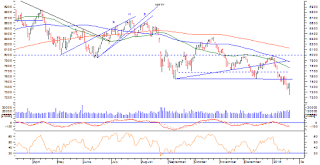 MARKET TREND FOR Thursday, January 21, 2016
Markets pulled back some 60-odd points from the low point of the day yesterday. Technically speaking, we can expect the Markets continue with its up move today as well. Keeping line with this analysis, the Markets are expected to open on a decently positive note and look for directions in initial trade. It would be critically important to see if the Markets are able to capitalize on its up move and build further gains.

The RSI—Relative Strength Index on the Daily Chart is 30.4766 and it is once again very near to being “oversold”. The NIFTY has made fresh 14-days lows but RSI has not and this is Bullish Divergence. It does not show any bullish or bearish divergence. The Daily MACD is bearish as it trades below its signal line.

On the derivative front, the NIFTY January futures have shed just 15,525 shares or negligible 0.07% in Open Interest. NIFTY PCR stands at 0.83 as against 0.82 yesterday.

While having a look at pattern analysis, the Markets hare off nearly 250-odd points after breaching the critical support levels of 7540. In the process the Markets have got oversold as well and are now attempting pullback. With the lead indicators remaining nearly oversold once again, any downtick with take the Markets to being oversold once again. This makes a pullback imminent. It would be also important to note that there has been an increase in PCR and this shows that despite fall in the Markets, there has been massive buying of puts that is going on. On the other hand, it also becomes important to note that the NIFT VIX have peaked little above September 2015 levels. This shows some hopes of the Markets bottoming out.

All and all, what we see on the Charts is that the Markets are attempting to find a short term base and are attempting to pullback. It becomes all the more important to note that even if the Markets see technical pullback, the levels of 7540 going ahead will be a major resistance to watch out for. The Markets are likely to see technical pullback but that should not be constituted as a trend reversal. While continuing to buy on selective basis, shorts should be avoided while adopting positive caution on the Markets. 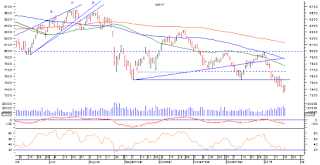 MARKET TREND FOR Wednesday, January 20, 2016
The Markets saw a much awaited technical pullback yesterday but it is important to observe that the rise that we saw yesterday was more on back of short covering than any fresh long positions as the Markets rose while shedding Open Interests across board. Today, we can once again expect a negative opening and it would be important to see if the Markets improve post opening. There are chances that Markets attempts to find base post modestly negative opening.

The RSI—Relative Strength Index on the Daily Chart is 35.2631. It has just moved above from its “oversold” area which is bullish. It further remains neutral without showing any bullish or bearish divergence or any failure swings. The daily MACD remains bullish as it trades below its signal line.

On the derivative front, the  NIFTY January series have shed over 4.33 lakh shares or 2.04% in open interest. This clearly shows the rise that we got yesterday was more on back of short covering than any fresh buying.

Coming to pattern analysis, as mentioned often in our previous editions of Daily Market Trend Guide, the Markets have decisively breached its triple bottom support of 7540 levels during its downside in the previous sessions. It went on shed further over 200-odd points and while doing so it got oversold and yesterday, it showed technical pullback from the fresh 52-week lows. Having said this, it becomes important to mention again that the critical support levels of 7540 that the Markets breached on the downside will continue to pose major resistance to the Markets while it tries to find a bottom and reverse itself.

All and all, the Markets are attempting to find a base and after today’s expected lower opening, there are possibilities that the Markets shows some improvement as we go ahead in the lesion. Looking at the lead indicators, we advise to refrain from creating any short positions as the possibilities of short traps remain with every downtick. At the same time, it is also advised to continue to keep purchases and overall exposures at moderate levels while maintaining cautious optimism on the Markets. 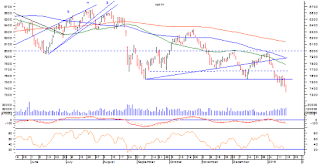 MARKET TREND FOR TUESDAY, JANUARY 19, 2016
Broader markets are now cleanly oversold and we can now expect some stability to return in the Markets.  The Markets are expected to open on a flat to mildly positive note and look for directions. It is expected and it is equally important that the Markets maintains and builds up on its expected mildly positive opening. NIFTY and other broader and sectoral indices are now seriously oversold and irrespective of the quantum, some amount of technical pullback remains imminent.

The RSI—Relative Strength Index on the Daily Chart is 28.2698 and it has reached its lowest levels in last 14-days which is bearish. However, it does not show any bullish or bearish divergence and it now trades in “oversold” territory. The Daily MACD remains bearish as it trades below its signal line.

While taking a look at pattern analysis, the Markets have breached its critical support levels of 7540 which were its previous 52-week lows and have since then remained weak on expected lines. Post breaching these levels, the Markets have lost over 200-odd points from those levels and now trades grossly “oversold”. The lead indicators clearly suggest themselves trading in oversold territory. Having said this, with the  NIFTY and other broader and secotoral indices trading in seriously oversold territory, some amount of pullback cannot be ruled out. In fact, some amount of technical pullback now remains imminent. However, on its way up, the significant levels like 7540 that the Markets have breached on the downside will pose resistance to it as well. Any amount of pullbacks that are seen now will remain “pullbacks” and will not amount to trend reversal in near term.

All and all, though the structure of the Markets remain evidently bearish in the immediate medium term, it is likely to show some stability and attempt some pullback. It is advised to completely refrain from creating fresh shorts. In fact with any weakness some very selective purchases can be made but at the same time profits at higher levels should be protected. Investors can now start creating long exposures in smaller quantities on highly selective basis. 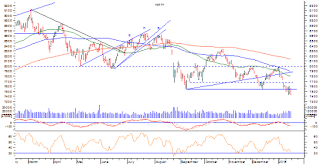 MARKET TREND FOR MONDAY, JANUARY 18, 2016
Speaking purely on technical grounds, the Markets ended on Friday near their low point and therefore are likely to continue to see some downside in the initial trade today. However, today, though we can expect to see a modestly negative opening, we can also hope for some respite from the weakness that we saw in the previous week. Markets are nearly oversold and there are some faint chances that the Markets may attempt to find temporary bottom and stabilize.

On the derivative front, the NIFTY January futures have added over 2.65 lakh shares or 1.19% in Open Interest. This shows further creation and addition of fresh shorts in the system. The NIFTY PCR stands at 0.82 as against 0.83 on Friday.

Coming to pattern analysis, the Markets have ended near the low point of the day on Friday and while doing so it has also breached its important pattern support levels of 7540. It is evident that on its way up, this level is all likely to pose resistance. There is no doubt that such close has made the Markets structurally weaker. However, at the same time, it is also important to note that lead indicators of the Markets are nearly “oversold” and any downtick at Close levels will make the Markets oversold .So, it becomes important to note that even if the Markets have got little structurally weaker, some amount of technical pullback remains imminent even if it continues to remain in overall downtrend.

All and all, it is also important to note that over half of NIFTY components are oversold. It is also important to note that nearly half of top BANKNIFTY components are oversold. This shows that some amount of pullback, either today or in coming days is now overdue. However, it should be noted that until the Markets are back above 7800, any rise will just remain a technical pullback and we will continue to remain in overall downtrend. It is advised to use all pullbacks to exit and protect profits while continuing to adopt a cautious outlook on the Markets.