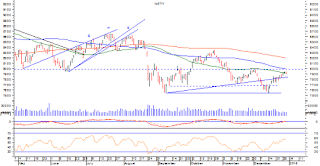 MARKET TREND FOR THURSDAY, DECEMBER 31, 2015
Markets are likely to see lacklustre opening and is likely to open on a quiet note once again. Today is the expiry of the current derivative series and apart from the jitters that we witness because of that, the session is likely to once again remain range bound and choppy and would continue to remain dominated with the rollover centric activities. The level of 50-DMA have continue to act as resistance at Close levels and it continues to remain as important level to watch out for.

Coming to pattern analysis, the Markets have resisted at its 50-DMA levels which stand at 7915 today.  Couple of intraday penetrations were observed in previous sessions but the resistance have stood valid at Close levels. If the Markets move past this level, the next logical targets for the Markets will be the important level of 8000. This is a major pattern resistance and it also coincides with the 100-DMA. Until the Markets moves past 50-DMA, it will continue to hover with a weak under tone and the levels of 7820-7840 will act as important support zone. Any breach below this will induce some more weakness.

All and all, with the session expected to remain dominated with rollovers, not much movements are expected beyond a range. However, jitters due to rollovers cannot be ruled out. Volumes will continue to remain lower due to holidays. Overall, it is advised to remain light on overall exposure until the directional bias is set and wear a cautious outlook on the Markets. 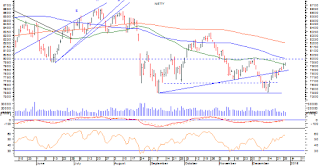 MARKET TREND FOR WEDNESDAY, DECEMBER 30, 2015
The Markets have ended yesterday after a V-shaped recovery and speaking purely on technical grounds, they are expected to continue with the up move. However, we are likely to see the Markets opening on a flat note and look for directions in the first half. There are chances that we may see the Markets improving as we go ahead in the session. Today, we enter into penultimate day of the expiry of the current series and the session will continue to remain dominated with rollovers centric activities.

The RSI—Relative Strength Index on the Daily Chart is 57.0121 and it has reached its highest value in last 14-days which is bullish. It does not show any bullish or bearish divergence. The Daily MACD remains bullish as it trades above its signal line.

Coming to pattern analysis, the Markets have attempted to advance after resisting to its 50-DMA for the entire day yesterday. Next logical resistance would come in at its 8000-8010 levels which is its major pattern resistance as well as the 100-DMA of the Markets. So long as the Markets continue to trade above the important levels of 7920, we see fair chances of the Markets testing 8000 levels. Some F&O data also suggests strong support around 7920. However, any slip below 7920 will see the Markets consolidating once again in capped range.

All and all, as mentioned, so long as Markets trade above 7920, it has good amount of chances that it tests 8000 levels in a day or two. Also, even if we see some consolidation happening at current levels, it is likely to remain capped in a very narrow range. We continue to reiterate making very selective purchases while protecting profits at higher levels. Positive caution is advised for today. 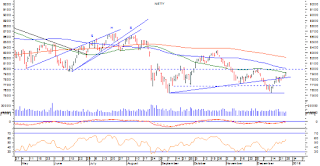 MARKET TREND FOR TUESDAY, DECEMBER 29, 2015
The Markets have expectedly advanced and touched its 50-DMA on expected lines. Today as well, we can fairly expect a modestly positive opening and expect the Markets to trade positive in the initial trade. However, there are also chances that the Markets may now see some consolidation setting in as it approaches yet another important pattern support which also coincides with its 100-DMA. However, there is some distance to go and some amount of consolidation cannot be ruled out.

The RSI—Relative Strength Index on the Daily Chart is 56.7850 and it has reached its highest value in last 14-days which is bullish. It does not show any bullish or bearish divergence. The Daily MACD remains bullish as it trades above it signal line.

If we have a look at pattern analysis, the Markets have predictably advanced to its immediate logical resistance levels of 50-DMA, which is 7925.15 today. It is important to note that though the Markets went above this on intraday basis yesterday, it has closed just a notch below this and therefore, this resistance, at Close levels, continues to remain valid even today. Therefore, even with a positive opening above this level, the Close levels should be watched out for and it would be necessary for the Markets to move past this level at Close. Going further from here, in a scenario where the Markets moves past this level at Close, it will see itself testing its all important pattern resistance of 8000-level which also happens to be its 100-DMA.

The reason of some consolidation setting is that there is one minor weakness seen in the rally of over 350-odd points that we have seen over past couple of sessions. The OBL-On Balance Volume indicator has not been rising since the NIFTY levels of 7750 and this makes the rest of the pullback little weaker. However, we may continue to adopt a highly stock specific approach as sectoral out performance will continue. Cautious optimism is advised for today. 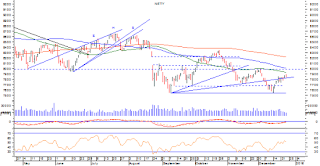 MARKET TREND FOR MONDAY, December 28, 2015
Markets open today after a long weekend holiday following Christmas and given the technical indicators, we would continue to keep the analysis for the coming week more or less on similar lines. The Markets are expected to open flat and look for directions in the initial trade and the levels of 7800-7820 would be important to watch out for as it would be very critically important for the Markets to maintain itself above these levels. The volumes would continue to remain on lower side due to year end.

Coming to pattern analysis, the Markets have attempted to confirm the reversal by giving a higher bottom after pulling back from its double bottom / 52-week low supports. After pulling back from those supports, the Markets had a intermediate consolidation and thus giving a higher bottom, attempted to move up again. Now that it has done so, the levels of 7800-7820 remain critically important as the Markets will have to maintain itself above that in order to prevent any weakness from returning once again. So long as the Markets remain above these levels, the next logical levels that we can expect are the 50-DMA levels, i.e. 7930.

All and all, though we continue to keep the analysis on the similar lines like previous week, the levels of 7800-7820 remain critical to watch out for. Also, the volumes are likely to remain lower and this may keep the Markets devoid of required depth. We may see such lower volumes in the entire week given the year end days. Over all, while continuing to make select purchases, positively cautious outlook is advised for today.