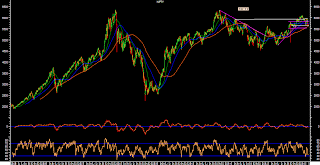 The Markets have, so far, held on to its all important support levels of 200-DMA at Close levels and therefore, there is no technical breach as of now. The Markets are expected to open flat and today being the expiry day of the current March series, the session is likely to remain dominated with rollover centric activities. So long as the Markets remaining above its 200-DMA at Close levels, there would be no negative breach on the Charts.

For today, the levels of 200-DMA of 5624 would be the important support level to watch for. Another supports comes at 5610.

The RSI—Relative Strength Index on the Daily Chart is 33.5493 and it shows no negative divergence or failure swings. The Daily MACD continues to trade below its signal line.

On the derivative front, heavy rollovers were witnessed on Tuesday. Today, the activity is expected to be intense as yesterday was a trading holiday. However, there is been no major offloading that was observed.

Having said this, as mentioned earlier, so long as Markets maintain levels above of its 200-DMA at close levels, there are chances that it may rebound from these levels. However, any breach below this would make the Markets temporarily weak in the immediate short term.

All and all, the Markets have been lacking directional triggers in the past couple of  sessions and therefore, we have been witnessing directionless movements. However, the chances of revival can be seen if the Markets do not breach the important support of 200-DMA on the downside. However, in absence of any confirmation, no aggressive buying should be done and it is advised to remain light on the positions. Continuation of cautious outlook is advised for today. 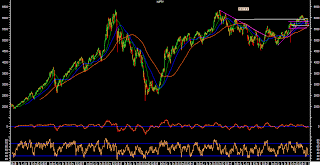 Markets are poised at a very critical juncture. Expect the Markets to open on a flat to moderately negative note following global weakness and look for directions. Intraday trajectory would be extremely important as the Markets still continue to trade above its important 200-DMA support at close levels. In case of lower opening today, it would be critical for the Markets to see that it closes not below its 200-DMA.

For today, the levels of 5620 and 5590 shall act as important supports for the Markets.

The lead indicators show that some temporary weakness is likely to continue. The RSI—Relative Strength Index on the Daily Chart is 32.5352 and it has reached its lowest value in last 14-days which is bearish. However, it does not show any bullish or bearish divergences. The Daily MACD is bearish as it continues to trade below its signal line.

On the derivative front, the NIFTY futures have added in total open interest showing creation of shorts again in the system. The NIFTY PCR stands as low as 0.78 which is very near to its oversold zone.

Having said this, it is important to note that as of now, the Markets have closed above its 200-DMA which is 5621.44 today. With negative opening imminent today, it would be very important for the Markets to improve before it closes for today so that there is no breach of this support. On the other hand, in case of any continuing weakness, the Markets shall get oversold and thus even if the weakness remains, it may be limited with no breach of the filters expected.

All and all, until temporary weakness is likely to continue in the initial trade but there are also chances  that we see improvement as we go ahead into the session. Rollovers shall also dominate the day’s activities as we are into expiry week. The behaviour of the Markets near its 200-DMA would be critical to watch out for. Overall cautious outlook is continued to be advised for today. 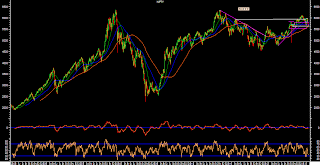 The Markets have consolidated in last two sessions and have maintained above its key support levels. Today, expect the Markets to open on a flat to positive note and look for directions. Stability after a volatile week can be fairly expected but the intraday trajectory would continue to play a vital role in keeping Markets above its key support levels.

All and all, though there is no breach on the Charts on the downside, the lead indicators suggests extreme caution even if the Markets trade around it key support levels. It would be imperative for the Markets to maintain those levels but at the same time, volatility just cannot be ruled out. Though selective out performance may be seen, cautious outlook is continued to be advised for today.