MARKET TREND FOR FRIDAY, JULY 24, 2015
Technical indicators clearly suggest the Markets to remain in consolidation in the immediate short term. The Markets are likely to open on a flat to mildly negative note and look for directions. Fresh up moves shall occur only above 8650-8675 levels and the Markets are expected to continue to take support in the channel. The intraday trajectory would be crucial to watch out for and the Markets are also likely to remain somewhat ingrained with volatility.

The RSI—Relative Strength Index on the Daily Chart is 60.1949 and it is neutral as it shows no bullish or bearish divergence or any failure swings. The Daily MACD remains bullish as it continues to trade above its signal line.

On the derivative front, the NIFTY July futures have seen shedding of over 7.52 lakh shares or 3.51% in Open Interest. On other had, August series have seen net addition of over 2.63 lakh shares or 11.51% in OI. Some net short positions have been observed in NIFTY Futures.

Coming to pattern analysis, the Markets are continuing to trade in a channel / trading range drawn from the lows of 8000 levels. As mentioned in our previous editions, the Markets will wait to give a clear breakout because it trades in a rising channel and the upper trend line keeps rising every day taking with itself higher the level which the Markets shall need to move past for a clear breakout. Therefore, until a sharp up move comes, the Markets are likely to continue to trade in a capped and upward rising channel with some amount of volatility ingrained in it.

Overall, with the chances of consolidation continuing at current levels, we continue to reiterate our advice of refraining from heavy long positions. Selective purchases may be made as stock specific action and selective out performance would continue. However, more liquidity should be maintained than taking fresh exposures with high amount of vigil at higher levels. 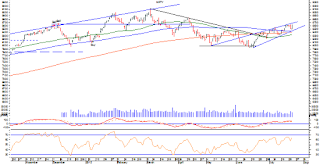 MARKET TREND FOR THURSDAY, JULY 23, 2015
The Markets are expected to open on a flat to mildly positive note and look for directions. As suggested by F&O data, the Markets are likely to continue with their up move but at the same time, it is important to note that the Markets still continue to trade within the channel and is currently trading below its  rising t rend line. Even with the Markets continuing to inch up, the rising trend line too would be rising which would keep the Markets within that rising channel.

The RSI—Relative Strength Index on the Daily Chart is 63.9005 and it does not show any failure swings. However, the NIFTY has made a fresh 14-period high but RSI has not this cause Bearish Divergence. The Daily MACD continues to trade above its signal line which is bullish. On the Candles, the Charts show some possibility of consolidation returning to the Markets as it shows an engulfing bullish pattern which is a sign of possible consolidation during an up move.

On the derivative front, the NIFTY July futures have added over 7.24 lakh shares or 3.50% in Open Interest. This is a positive figures which suggests addition of fresh longs in the system.

Coming to pattern analysis, the Markets have continued to remain in the upward rising channel drawn from its lows of 8000. The Markets presently trade below the upper rising trend line even after yesterday’s rise and this keeps the possibilities open for a consolidation from higher levels. As mentioned in our yesterday’s edition of Daily Market Trend Guide, this trend line is not major but it is important enough to cause consolidation in the Markets in the immediate short term which is what exactly is happening. Further, with the trend line rising, the breakout levels too rise with each passing of day which keeps the Markets away from breaking out even with the advances.

Overall, F&O data suggests possible continuation of the up move in the Markets. However, with the Markets still within the channel mentioned above, possibilities of profit taking bouts or consolidation cannot be ruled out from higher levels. Given this scenario, it is advised to keep the purchases very limited and selective while vigilantly protecting profits at higher levels. 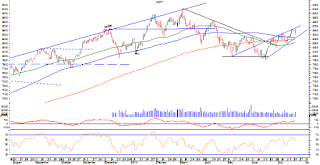 MARKET TREND FOR WEDNESDAY, JULY 22, 2015
The Markets are likely to see a modestly negative opening and trade negative in the opening trade. The Markets are likely to continue to remain in corrective mode and there are chances that it continues to remain in this corrective mode for the immediate short term and go near to its testing its 100-DMA. The Markets are perfectly resisting the channel as mentioned in our previous edition of the Daily Markets Trend Guide and are in the consolidation mode for the immediate short term.

The RSI—Relative Strength Index on the Daily Charts is 58.2131 and it remains neutral as it shows no bullish or bearish divergence or any failure swings. The Daily MACD continues to remain bullish as it trades above its signal line.

On the derivative front, the NIFTY July futures have shed over 7.07 lakh shares or 3.03% in Open Interest. This signifies some unwinding of long positions and profit taking. The NIFTY PCR stands at 1.16 as against 1.21.

Coming to pattern analysis, the Markets are in consolidation mode as it is resisting to a upward rising extended trend line drawn from the bottoms of 8000-levels. This is minor trend resistance but as mentioned in our previous edition of Daily Market Trend Guide, it is enough to cause the Markets to consolidate and put it is minor corrective mode. The immediate major resistance for the Markets exist at its 100-DMA and if the weakness persist, then there are chances that the Markets test this level. However, it would still be within a rising channel and any fresh up move shall occur only after the Markets moves past the 8650 levels with conviction.

Overall, some weakness is likely to persist in the initial trade and the intraday trajectory that the Markets form would be crucial to watch out for. The Markets will have to improve post negative opening otherwise any further weakness will have the Markets test its 100-DMA. In given scenario, it is advised to refrain from making fresh purchases until the directional call gets clear and the Markets shows some signs of slowing down in consolidation. Overall, while maintaining liquidity, cautious outlook is advised for today.


Markets had a typical consolidation day today as it ended the day with minor losses after recovering some 50-odd points from the low point of the day. The Markets saw a quiet opening on expected lines but soon dipped into the negative after trading positive in the early minutes of the trade. The Markets remained under pressure in the morning trade while it formed its day’s low of 8559 by afternoon. It traded sideways for some time in early second half of the session. However, the last hour and half of trade saw the Markets gathering strength once again. This time, it saw itself recovering all of its losses to trade back into the green. The Markets also went on to form the day’s high at 8624.10. It came off a bit from there and finally settled the day at 8603.45, posting a minor loss of 6.40 points or 0.07% while forming a lower top and lower bottom on the Daily Bar Charts. 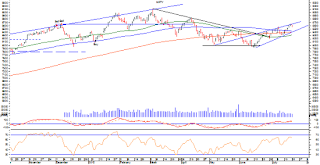 
We are likely to see the Markets opening again on a flat note and looking for directions in the initial trade. Today, five NIFTY companies are coming out with numbers and this will have some effect on the sentiments but again, speaking purely on technical grounds, the Markets are less likely to give a runaway up move and they are likely to continue to consolidate in a broad given range.

The RSI—Relative Strength Index on the Daily Chart is 64.9731 and it is neutral as it shows no bullish or bearish divergence or any failure swings. The Daily MACD continues to trade bullish as it is currently above its signal line.

On the derivative front, NIFTY July futures have added another over 2.23 lakh shares or 1.05% in Open Interest. This is clear indication that there has been fresh buying from lower levels yesterday and the up move that we saw from the low point of the day was not just short covering.

Coming to pattern analysis, the Markets are consolidating after nearly 600-odd points pullback from 8000-levels after forming a double bottom. While doing so, it has also formed one higher top and a rising channel as well, which in turn confirmed this bottom. Having said this, the Markets are resisting to a minor trend resistance; to a trend line drawn from the 8000-odd levels. This may not be a major resistance but enough resistance for the Markets to cause it to consolidate at these levels in a broad range. However, given the technical set up, there seems to  be a limited downside to the Markets and more of a ranged consolidation can be expected.

Overall, the Markets are likely to continue to tread a cautious path. We may cite any reason such as results, earnings, etc. for a ranged movement but again, as mentioned above, speaking purely on technical grounds, the Markets are likely to continue with its consolidation within a given range with the levels of 8640-60 range acting as resistance. On the same lines, with the downsides being limited, any downticks should be utilized to make smart purchases. Overall, continuation of neutral to positive outlook is continued for today.