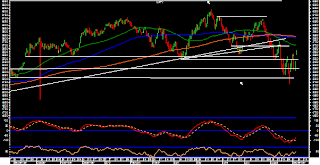 The Markets have ended near the high point of the day yesterday and technically speaking, it is likely to open on a positive note and continue with its up move, at least in the initial trade. Today as well, we can fairly expect the Markets to open on a modestly positive note and look for directions. However, the Markets are expected to open near its resistance levels and therefore, it would be crucially important to see if the Markets sustain the opening gains.

The lead indicators remain firmly in place. The RSI—Relative Strength Index on the Daily Chart is 52.1637 and it has reached its highest value in last 14-days, which is bullish. It does not show any bullish or bearish divergence. The Daily MACD remains bullish as it continues to trade above its signal line. On the Candles, A rising window occurred. This usually implies continuation of bullish trend. There have been 6  rising windows in the last 50 candles which makes the trend even more bullish.

On the derivative front, the NIFTY have shed over 7.09 lakh shares or 3.84% in open interest. This signifies that there was a massive short covering as well in the Markets yesterday. It would be important to see if this gets replaced with fresh longs.

Given the above reading, it is important to note that  the lead indicators on the Daily Charts remain intact and in place but there is shedding of Open Interest in the derivative segment. This would mean that there are chances of positive opening but at the same time, we can again see some paring of gains or some profit taking from higher levels. This can make the session volatile as well.

All and all, we can fairly expect a decent opening again in the Markets. However, given some reduction in OI, we can also expect the Markets to consolidate or see some paring of gains from the higher levels. In this case, the intraday trajectory would be crucially important. It is advised to protect profits at higher levels and avoid very aggressive buying however, the bias still remains intact despite some chances of consolidation / profit taking as lead indicators remain intact. Overall, cautious optimism is advised for today. 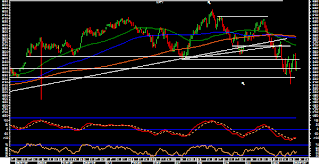 Today, under normal circumstances, the Markets are expected to continue with its up move and open and trade positive at least in the initial trade. However, the global markets suggest even a stronger opening and the Markets may see a gap up opening and open near its pattern resistance levels of 5525-5540. If it opens below this levels, these levels would act as resistance and it would be critically important to see if the Markets sustain the opening gains.

All lead indicators continue to remain in place. The RSI—Relative Strength Index on the Daily Chart is 45.7607 and it is neutral as it does not show any bullish or bearish divergence or failure swings. The Daily MACD remains bullish as it trades above its signal line.

On the derivative front, NIFTY has lost modest 1.72 lakh shares or 0.92% in Open Interest. This shows that there was lot of short covering after fall of day before. However, it would be important to see if these gets replaced with fresh buying. However, this reduction of less than 1% in OI is less significant.

With the above reading, we can fairly say that the yesterday’s rise has not seen very sharp reduction of Open Interest. This can also be read as replacement of shorts with fresh longs, with slight reduction in Open Interest. Today, it is more likely that we will continue to see the up move continuing.

All and all, it is likely that we open today on a higher note and trade around the immediate resistance levels mentioned. In such scenario the  it would be critically important for the Markets to sustain the opening levels. For this, intraday trajectory that the Markets form after opening would be critically important. It is advised to over expose while taking longs. Positions should still be selectively taken and profits should be protected at higher levels as volatility or mild profit taking from higher levels cannot be ruled out.

Today, expect the Markets to open on a flat to mildly positive note but might see some more corrective action, at least in the initial trade. However, at the same time, there are chances of the Markets trying to find bottom again from lower levels. Intraday trajectory would be crucially important for today’s trend.

The lead indicators do not show much damage as yet. The RSI—Relative Strength Index on the Daily Chart is 40.2970 and it does not show any bullish or bearish divergence or any kind of failure swings and is therefore neutral. The Daily MACD still continues to remain bullish as it trades above its signal line. On the Candles, An engulfing bearish line occurred. If the engulfing bearish pattern occurs during a downtrend (which appears to be the case with NIFTY), it may be a last engulfing bottom which indicates a bullish reversal.  The test to see if this is the case is if the next candle closes above the bottom the current (black) candle's real body.

On the derivative front, the NIFTY September futures have added over 6.29 lakh shares or 3.49% in Open Interest. This signifies some creation of short positions in the Markets, but not so as the quantum of fall suggested earlier.

Having said this, the Markets are poised to move on either side and there is no directional bias that is clear in the Markets. However, with no damage on the lead indicators as yet, we can fairly expect the Markets to find support and recover from the lower levels in case of mildly negative opening.

All and all, the Markets are likely to open modestly weak and trade so at least in the initial session. But given the lead indicators, there are fair chances that the Markets attempt to find some support at lower levels. Given this reading, it is advised that given the velocity of yesterday’s correction, retail traders / investors should refrain from taking any short positions in the Markets. Very selective purchases may be made at lower levels while protecting profits on existing positions. 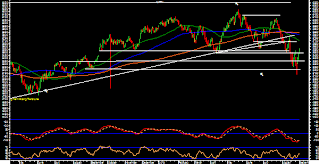 Today as well, expect the Markets to open on a modestly positive note and look for directions. However, we once again point out that the Markets have risen over 445-odd points from the lows made on August 28th and this is getting little jittery. There are strong chances that the Markets consolidates but maintains levels above 5500 in coming session, while keeping the overall trend certainly intact.

For today, the levels of 5564 and 5620 are immediate resistance levels on the Charts. The supports come in at 5500 levels.

The lead indicators certainly suggest the trend to remain intact in coming sessions. The RSI—Relative Strength Index on the Daily Chart is 49.3573 and it has reached its highest value in last 14-days which is bullish. Also, the RSI has made a new 14-day high but NIFTY has not and this is a Bullish Divergence. The Daily MACD continues with its positive crossover and it currently bullish as it now trades above its signal line.

On the derivative front, the NIFTY September futures have added over 7.16 lakh shares or 4.14% in Open Interest. This signifies continuation of creation of longs and the rise cannot to attributed to any kind of short covering.

Given the above reading that the Markets have moved past its pattern resistance levels of 5500-5520 yesterday, the lead indicators showing continuing bullish momentum and the Markets making a positive crossover on Daily MACD certainly suggests the continuation of up move in the immediate short term. However, along with this, we also have to bear in mind the one-way rise of over 445-odd points since lows of August 28th and this may make the Markets see some range bound consolidation.

All and all, we can expect the up move to continue in the immediate short term. However, due to the reasons cited, we cannot rule out some minor profit taking from higher levels or some range bound consolidation taking place. However, until the Markets maintains levels above 5500, the trend would remain in tact. Very selective purchases may be made while protecting profits at higher levels.