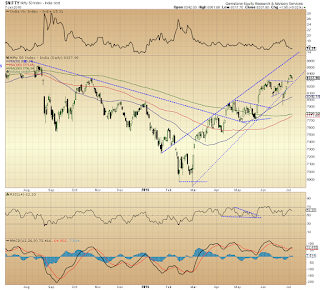 For today, the levels of 8375 and 8400 continue to remain as immediate resistance levels for the Markets. The supports come in lower at 8305 and 8260 levels.

The RSI—Relative Strength Index on the Daily Chart is 62.2029 and it remains neutral as it shows no bullish or bearish divergence or any failures swings. The Daily MACD is currently bullish as it trades above its signal line.

On the derivative front, the NIFTY July future have shed over 2.60 lakh shares or 1.38% in Open Interest. Some amount of reduction of positions was evident in the session yesterday.

Coming to pattern analysis, as mentioned often in our previous editions, the Markets are currently consolidating after over 400-odd points of rise from the lows of June 24th. Not only Markets have recovered these losses, it has moved past its previous immediate resistance levels of 8295 and has managed a breakout on the upside from there. Currently, it continues to consolidate after such brilliant recovery and is preparing healthy grounds for further up move. Having said this, it is also important to note that it continues to trade in a upward rising channel drawn from the February lows that the Markets formed.

All and all, it is very much evident from the overall technical structure of the Charts and the F&O data that some amount of consolidation will continue to remain for some time. During this time, the Markets will continue to see capped movements and will also witness some volatility remaining ingrained in the Markets. It is advised to continue to maintain liquidity and keep purchases very selective and modest. While utilizing any available downside to make fresh selective purchases, cautious approach should be maintained in the Markets.

MARKET TREND FOR THURSDAY, JULY 07, 2016
The Markets took a breather after six-day rally and ended the day with modest gains after a range bound but volatile trade. The Markets are expected to open on a flat note today and look for directions. Though the Global Markets remain positive, we are likely to see a flat opening as we would adjust with yesterday’s trade when we had a trading holiday. However, in case, consolidation is likely to continue in the Markets and it would continue to give health to the current rally as well.

The RSI—Relative Strength Index on the Daily Chart is 62.0939 and it remains neutral as it shows no bullish or bearish divergence or any failure swings. The Daily MACD remains bullish as it trades above its signal line.

On the derivative front, the NIFTY July futures have shed over 1.51 lakh shares or 0.79% in Open Interest. There was bit of long unwinding / profit taking witnessed today. The NIFTY PCR remains unchanged at 1.04.

Coming to pattern analysis, after returning back into the rising channel drawn from February lows, the Markets achieved a breakout moving past its immediate past top of 8295 levels. The Markets not only recovered more than it lost on June 24th but also went on to give a breakout on the upside as well. After six days of gains, and moving up nearly 400-odd points in previous seven sessions, the Markets took a breather yesterday and showed first signs of consolidation on Daily Charts. The Markets are well within its rising channel and today as well, if it continues to consolidate, it would be healthy for the Markets in the long run.

This keeps our analysis on similar lines today as well. The Markets will trade in a capped range and are also expected to remain volatile to some extent. The Markets,  though some extent of volatility is expected to remain ingrained in it, will continue to see some sectoral out performance today as well. It is advised to continue to use corrective dips to make selective purchases. All and all, cautious optimism is advised for the day.

MARKET TREND FOR TUESDAY, JULY 05, 2016
The Markets posted its sixth day of gains yesterday and ended yet another day with gains. However, it has displayed some signs of impending weariness at higher levels. Today, we can expect the Markets to open on a modestly negative note and look for directions. We have a truncated week this time and we can fairly expect the Markets to trade in a capped range and consolidate at current levels which would be in turn, healthy for the Markets. 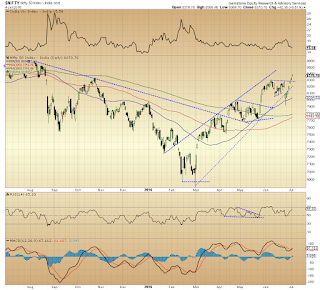 The RSI—Relative Strength Index on the Daily Chart is 65.2047 and it has reached its highest levels in last 14-days which is bullish. It does not show any bullish or any bearish divergence. The Daily MACD has given a positive crossover and it is now bullish as it trades above its signal line.

On the derivative front, the NIFTY July futures have added over 3.24 lakh shares or 1.73% in Open Interest. The NIFTY PCR stands at 1.04 as against 0.98 yesterday.

Coming to pattern analysis, the Markets have not only managed to recover all of its losses post June 24th but have also managed to deliver a breakout by moving past its previous intermediate top of 8298. Having said this, the Markets are currently back into the upper rising channel drawn from the lows of February. Given the fact that the Markets have posted gains for six straight sessions, it is very much likely that it sees some consolidation at higher levels. If it actually does, it would be, in fact healthy for the Markets. All lead indicators very clearly suggest that the uptrend in the Markets remains intact and the under current remains buoyant.

All and all, we are likely to see a modestly negative opening in the Markets today, the undercurrent continues to remain buoyant. In event of consolidation happening, we will see some sectoral rotation as well. It is best advised to avoid shorts and make selective purchases in the sectors that were lagging so far. While utilizing each up moves in protecting profits, cautious optimism is advised for the day.

MARKET TREND FOR MONDAY, JULY 04. 2016
We draw your attention to our edition dated June 24th, wherein we had categorically mentioned that though knee-jerk reaction to the Brexit would be inevitable, we will see the technical factors taking over and the Markets will see this as a huge buying opportunity. Today, five sessions later, the Markets have not only recovered those early losses but have ended above pre-brexit levels. Today, we are slated to see one more positive opening today and we will see the Markets touching fresh 2016 highs. However, given the current technical structure of the Markets, it would be important to see if the Markets maintain its expected opening levels. 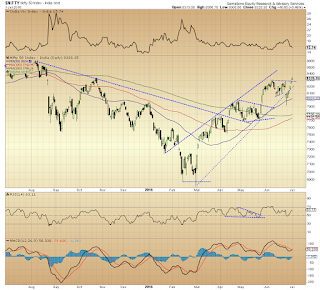 The RSI—Relative Strength Index on the Daily Chart is 63.1134 and it has reached its highest value in last 14-days which is bullish. It does not show any bullish or bearish divergence. The Daily MACD is still bearish as it trades below its signal line.

On the derivative front, the NIFTY July futures have 3.29 lakh shares or 1.79% in Open Interest. This shows some more addition in long positions in the system.
Now coming to pattern analysis. The Markets have not only managed to recover all of its losses that it recorded on June 24th, but has managed to move past its previous immediate top / resistance zone of 8285-8300 levels. It attempted a breakout on Friday as it moved past these levels and today as well, we will see the markets scaling fresh 2016 highs on back of expected positive opening. However, though we can certainly say that the logical target for the Markets can be 8550-8600 levels in the immediate short term if we extend the channel drawn from the February lows, some amount of consolidation or mild profit taking cannot be ruled out. However, if this happens, it would be in fact healthy for the Markets as its overall structure continues to remain buoyant.

Overall, after posting five days of straight gains, the Markets are slated for a positive opening once again. However, in the same breath, some amount of profit taking / consolidation at higher levels cannot be ruled out. In fact, if this happens it would be little healthy for the Markets in the immediate short term. It is advised to refrain from shorts as any profit taking if it is seen is likely to remain much capped and range bound as overall structure of the Markets continue to remain buoyant.